Lockheed Martin Wants to Merge an F-22 and F-35 Into 1 Fighter for Japan. It Won't Happen. 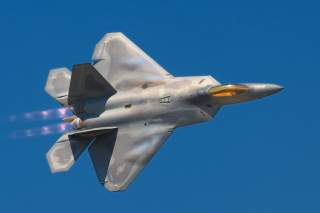 Reuters is reporting that Lockheed Martin is pitching an F-22 and F-35 combination to Japan to meet Tokyo’s requirement for a next-generation air superiority fighter.

According to the Reuters report, the company would pitch the hybrid plane in response to the Japanese F-3 request for information only if the United States government allows the required technology transfers. Under the 1997 Obey Amendment, the export of the F-22—which has been out of production since 2012—is strictly prohibited.

While the details of the proposed aircraft are unknown, presumably Lockheed would draw upon the F-35’s exponentially more advanced sensor and avionics technology and package that equipment into a modified Raptor airframe that offers grotesquely superior aerodynamic performance (compared to the Joint Strike Fighter).

The new aircraft—should it ever materialize—would likely be powered by Japanese modified versions of the F-35’s Pratt & Whitney F135 afterburning turbofans—themselves derivatives of the F-22’s engines—since the original F119 motors are also long out of production. An unnamed source told Reuters that the concept pitched to Japan “would combine the F-22 and F-35 and could be superior to both of them.”

However, while the proposed aircraft would leverage technology from the F-22 and the F-35, designing, integrating and flight testing what would essentially be a completely new fighter aircraft would be an expensive and time consuming proposition. It would take many years and billions of dollars to build a hybrid F-22/F-35 aircraft. Those factors would only be exacerbated by the fact that it is exceedingly unlikely that the United States Air Force would adopt the derivative aircraft for its own Penetrating Counter Air requirement.

From what the U.S. Air Force’s Air Combat Command has described of its future requirements for a next-generation penetrating air superiority aircraft, neither an F-22 or F-35 derivative would come close to meeting the service’s needs. Among the requirements that Air Combat Command is looking at is enormously expanded range, payloads, stealth and electronic attack capability.

Indeed, particularly for the stealth requirement, the PCA will likely be required to have broadband all-aspect low observable capability to defeat even low frequency radars—a new generation of which threats to unmask current generation of low observable aircraft. That suggests an all-wing aircraft design where there are no vertical or horizontal tail surfaces are present—which would give away the jet’s position to VHF and UHF band radars.

Air Force officials have openly discussed plans for the PCA to escort the Northrop Grumman B-21 Raider strategic bomber during strikes deep inside heavily defended airspace. As such, designers will have to combine the need for sustained supersonic performance and fighter maneuverability with an airframe with the range to escort the B-21 to its targets and back.

In addition to greatly expanded range, the Air Force will likely be requiring the PCA to have a much larger payload than existing aircraft such as the F-22. One of issues Raptor pilots often complain about is that the aircraft does not carry enough missiles to take advantage of its stealth and sensors. Given that the PCA would likely fly even longer sorties over the vastness of the Pacific, the aircraft will likely have a requirement to carry a much larger payload.

Given that the PCA will likely have much greater range and payload requirements, the future Air Force air superiority aircraft will almost certainly need to take advantage of adaptive cycle engine technology. The Air Force and Navy have been working developing such engines, which could reduce fuel consumption by more than 35 percent over current engines. Thus, in order to build a reasonably sized jet—one that is not the size of a bomber—the PCA will likely incorporate next-generation adaptive cycle engines to meet the Air Force’s ambitious range and performance requirements.

Certainly a F-22/F-35 hybrid would not be able to meet the U.S. Air Force’s likely requirements for the PCA even if it meets Japanese requirements. Thus, Japan would not only have to pay to develop, test and built the aircraft by itself, it is also unlikely to secure an export customer in the United States to defray the cost of the aircraft’s development. The most likely scenario is that the F-22/F-35 hybrid will remain in the realm of fantasy.