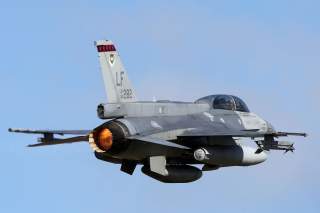 The venerable Lockheed Martin F-16C Fighting Falcon multirole fighter could be flying with the United States Air Force for decades to come. Indeed, the jet could be flying until 2048 before it finally retires.

The Lockheed Martin F-35A Joint Strike Fighter is slated to eventually replace the long-serving “Viper”—as the F-16 known by its pilots—but the new stealth fighter is not being built fast enough or in the quantities needed to recapitalize the Air Force’s vast fleet of Fighting Falcons in the near term. As such, the Air Force is funding a program to extend the F-16’s airframe life from 8000 hours to 12,000 hours to “augment” the F-35 as it struggles to maintain its force structure.

With the F-16 SLEP structural modifications installed, the Air Force could safely operate its fleet of F-16 Block 40 through 52 aircraft out to 2048 and beyond. “The Air Force and Lockheed Martin also reduced projected service life costs for the Block 40-52 fleet, paving the way for safe, cost-effective F-16 flight operations decades into the future,” reads a Lockheed Martin statement.

The Air Force hopes to extend the service lives of up to 300 F-16C/D Block 40-52 aircraft. Validating that the F-16 airframe is capable of being flown for 12,000 hours (with modifications) allows the service and Lockheed Martin to move the second part of the Viper’s SLEP program. The modified aircraft will need a Military Type Certificate (MTC)—which Lockheed will have to submit to the Air Force's Technical Airworthiness Authority in the coming months. “Part II seeks to validate further extending the F-16's operational life based on final service life analysis from extended durability testing,” a Lockheed statement reads.

The Air Force’s current F-16 life extension effort is a new iteration of an earlier effort to modernize and extend the life of the service’s Viper fleet. The original effort included a program to upgrade the avionics called the Combat Avionics Programmed Extension Suite (CAPES) and a tandem SLEP program. The CAPES program included a host of upgrades including the Northrop Grumman AN/APG-83 Active Electronically Scanned Array (AESA), the ALQ-213(V) electronic warfare suite and a new display among other improvements.

Though the CAPES/SLEP upgrades were cancelled due to the Congressionally mandated sequestration automatic budget cuts that were enacted in 2011, elements of the program have survived out of necessity. The Air Force is currently testing the AN/APG-83 at Edwards Air Force Base, Calif. However, while the service has expressed renewed interest in the radar, it is not clear that the Air Force will buy the APG-83 for its own F-16s in the immediate future. “The APG-83 will be a form, fit and function modification that will operate within existing space, power and cooling capabilities of the platform,” said Lt. Col. Chris Keithley, commander of the 416th FLTS—which is testing the new radar.

Eventually, the Air Force will have to upgrade the F-16’s sensor package if the jet is to stay relevant against tomorrow’s threat environment.