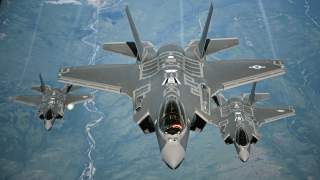 Airpower enthusiasts have long promised that the introduction of fifth generation combat aircraft, particularly the F-35 Joint Strike Fighter (JSF) when it is finally fielded in numbers, will change the nature of air warfare. The F-35’s combination of stealth, maneuverability, its Active Electronically Scanned Array (AESA) radar, passive sensors and battle management software makes it ideal as both a strike platform and a forward operating sensor.

At last year’s Red Flag exercises, the F-35A racked up an impressive 15:1 kill ratio. It can locate and attack advanced surface-to-air threats with pinpoint accuracy, blowing holes in hostile air defenses through which non-stealthy aircraft can advance. It can also operate in stealth mode, employing its advanced sensors to multiply the effectiveness of older aircraft in air-to-air combat.

More importantly, the JSF improves the effectiveness of other Air Force capabilities. One Air Force pilot familiar with efforts to develop new concepts of operations for exploiting the unique attributes of fifth-generation fighters, explained their impact on future air warfare this way:

“Before…we would need to have the entire intelligence, surveillance, & reconnaissance (ISR) constellation of aircraft and satellites all working together to get us some information that’s going to be pretty old by the time they reach the target. Now, instead of waiting for all that stuff to be built in at an Air Operation Center somewhere, that information is now being immediately displayed to people that are in aircraft in the AO (Area of Operations) that can immediately apply some sort of effect, either kinetic (e.g. missiles) or non-kinetic (e.g. jamming).”

What this pilot described is the beginning of a transformation in the command and control of air forces. Airpower visionaries such as Lt. General David Deptula, USAF (Ret.), have long predicted that the introduction of fifth-generation aircraft will radically alter current ways of conducting air operations. The F-22, F-35 and B-21 are leading the way to a future in which powerful, resilient networks knit together a vast array of sensors, weapons and platforms operating across all the domains of warfare.

The result could be the creation of what Deptula describes as a combat cloud, an ISR/strike/maneuver/sustainment complex which will generate, fuse and distribute vast amounts of information to support continuing distributed combat operations. Once the F-35 is deployed with three U.S. military services and around a dozen allied countries, it will provide a starting point for a new way of warfare, what Air Force Chief of Staff, General David Goldfein, has described as Multi-Domain Command and Control.

The same attributes that make the F-35 so powerful in air-to-air and air-to-ground warfare are opening up possibilities for a radical improvement in the way the U.S. military conducts air and missile defenses. The key to effective air and missile defense is the ability to see and track targets as early as possible. Today, this is accomplished by a mix of space-based sensors, forward-deployed radars and airborne platforms such as the Air Force’s E-3 Airborne Warning and Control System (AWACS) and the Navy’s E-2D Advanced Hawkeye.

The U.S. Navy has been a pioneer in the area of employing distributed sensors and weapons to provide a flexible response defense against air and missile threats. The Navy Integrated Fire Control-Counter Air (NIFC-CA) system provides both engage-on-remote and over-the-horizon air defense capabilities using networks of sensors, weapons and platforms. The ability to engage from over the horizon dramatically increases the defensive envelope of current air defense systems.

Now add the JSF into the mix of systems and NIFC-CA becomes even more potent. Operating from large deck amphibious warfare ships, the Marine Corps’ F-35B nearly doubles the number of warships able to deploy airborne sensors as part of the NIFC-CA architecture. In 2016, the Navy successfully demonstrated that the F-35B could serve as a forward-deployed sensor for the Aegis Ballistic Missile Defense system. A live fire exercise involving the F-35B and Aegis is planned for this year. When the F-35B and the carrier-based F-35C are fully deployed, the Navy will have hundreds of potential airborne sensors with which to conduct air and missile defense operations.

The same principle that drives NIFC-CA’s defensive power, a network of sensors and shooters, also underpins the Navy’s pursuit of distributed lethality. To be effective, distributed lethality requires, first, new longer-range weapons and, second, sensors capable of guiding those weapons to their target. Not only could the F-35 launch some of these new weapons, it could serve as a forward-deployed sensor, providing targeting data for those fired from surface ships, submarines and other aircraft.

All aircraft, even fifth-generation systems, are more vulnerable to attack when they are emitting energy. That is what makes the JSF’s suite of non-emitting or passive sensors, so significant. A forward-deployed stealthy aircraft employing non-emitting sensors can provide early warning of an incoming ballistic and cruise missile attack as well as determine the missile’s trajectory or flight path.  In 2014, the Missile Defense Agency (MDA) conducted an experiment that successfully demonstrated the ability of the F-35’s Distributed Aperture System, a set of electro-optical and infrared sensors, to develop a 3-D moving picture of a ballistic missile’s trajectory.

The U.S. Army too may be climbing aboard the “F-35 as missile defense sensor” bandwagon. It dawned on Army developers that from the opening moments of a future high-end conflict, the F-35 will be conducting missions in enemy airspace. The JSF will be in the perfect position to support battlefield air and missile defense operations. Recently, officials from the Army’s Space and Missile Defense Command held discussions with representatives of the F-35 program office and operational users regarding ways of employing the JSF as a forward-based, mobile sensor in support of theater air and missile defense.

Eventually, the F-35 may be equipped with advanced interceptor missiles or even a tactical laser with which to directly engage ballistic missiles. But even when its magazines are empty, the JSF will be able to provide critical formation in support of other air and missile defense systems.