Long, Difficult Road Ahead for France in Fight Against ISIS 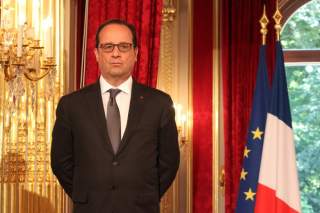 France will not be able to go it alone in the long fight to destroy the Islamic State (ISIS), underscoring its calls for greater European participation and coordination. This was the conclusion of a panel of experts convened by the Center for the National Interest, the parent institution of this publication, on Thursday. Its morning discussion on “France’s Foreign and Defense Policy Priorities After Paris” was moderated by Andrew Bowen, the Center’s Senior Fellow and Director of Middle East Studies.

Hudson Institute research fellow Benjamin Haddad reminded the audience of France’s familiarity with terrorism—alluding to its experience in Algeria—but he argued that the current ISIS threat represents a new set of challenges on a much greater scale. He expressed concern that French security services are overwhelmed, noting that the country’s terror watch list has ballooned to include 11,000 people while the General Directorate for Internal Security (DGSI) has only roughly 4,000 agents.

Haddad added that terrorists’ tactics had evolved (the November 13 attacks featured the first use of suicide bombers on French soil) and highlighted the complexity with which the attacks were organized. Responding effectively to the attack would require greater integration of European intelligence agencies. That the attack had been planned extensively in Belgium beforehand “shows the shortcomings of European cooperation and European security agencies,” he said, and the attacks represent “a wakeup call for European countries to step up cooperation.”

Olivier DeCottignies agreed. DeCottignies, Diplomat in Residence at the Washington Institute for Near East Policy, also stressed the need for greater European security cooperation. He echoed French president François Hollande’s assertion that the November 13 attacks had been an attack not only on France, but all of Europe: “A homeland security issue for one European country is a homeland security issue for all. This is why cooperation is needed.” France’s military response to the attacks was familiar, DeCottignies said, noting the French army has been involved in counterterrorism operations in Africa for years. What France was really seeking, he said, was “burden sharing” in “the forward defense of the continent.”

There was little doubt among the panelists that close cooperation with allies would be central to France’s anti-ISIS efforts. RAND Institute Senior Political Scientist Christopher Chivvis pointed to the logistical obstacles France would need to hurdle to sustain extended operations in the Iraqi/Syrian theater. Arguing that French resources were stretched thin from counterterror operations in Africa, Chivvis questioned who would serve as the custodian of vulnerable areas there if France were to shift its focus to the Middle East.

The deployment of French aircraft carrier Charles De Gaulle to the eastern Mediterranean has improved France’s operational capabilities in Syria, but that ship could only sustain operations there for six months before needing to return to port. A French commitment beyond that time would require regional bases and, as a participant observed, a sophisticated logistics effort to fuel, maintain and arm the aircraft. However, Chivvis also acknowledged that France had the benefit of a relatively fresher military force. Having abstained from the war in Iraq, the French public is not as war-weary as its American and British counterparts, and its military resources have not been as taxed in recent years.

Despite this advantage, DeCottignies also saw France undergoing a paradigm shift in which foreign policy in the country would be subject to further discussion and legislative debate rather than remaining largely an executive prerogative informed by a bipartisan strategic consensus. Meanwhile, Haddad expressed concern over the dramatic rise of France’s far-right National Front party and what he dubbed “populist and anti-Western movements,” likening the popularity of pro-Russian or “pro-strongman and anti-establishment rhetoric” to the sustained support of Donald Trump in the U.S. presidential race.

Russian involvement in the Syrian conflict and Franco-Russian engagement loomed large over the discussion. Chivvis was skeptical of what he identified as “France’s decision to move so rapidly towards not only coordination but potentially cooperation with Russia against ISIS in Syria” rather than NATO. He argued that France’s focus on the European Union in the wake of the attacks rather than NATO came in part because a NATO response could complicate an already difficult dialogue with Russia. But DeCottignies disagreed, pointing out the absence of NATO responses in the wake of similar terror attacks in Europe in the past.

Both Haddad and DeCottignies also discounted the idea of Franco-Russian cooperation. Haddad argued that there “wasn’t much illusion in France regarding cooperation with Russia.” France had hoped that Russia would be willing to focus more on ISIS and Hollande had been playing to domestic political sentiment which has seen growing support for alignment with Russia, Haddad said. DeCottignies concurred, saying that French outreach to Russia in the wake of the attacks was intended to test Russian willingness to cooperate with Western objectives in providing humanitarian assistance to refugees and destroying ISIS. There was broad agreement among the panelists that Russia could eventually play an integral role in facilitating a potential political solution to the Syrian conflict, but Chivvis admitted: “We are a long ways off from there right now. This is not something that is happening anytime soon.”

Image: Flickr/ActuaLitté. Photograph has been cropped.