Look Up, America: China Is Playing By Its Own Rules in Space 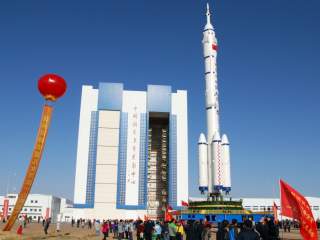 In the film The Martian, China reluctantly decides to come to the aid of the United States in space. While this makes for a typically saccharine Hollywood ending, the deliberation portrayed reflects a real and growing uncertainty over China’s integration as a cooperative or competitive member of the international order. And, like in the movie, China is asserting itself not only on the globe, but in outer space as well.

That China is pushing back against the U.S.-led international order is no secret. Beijing is exerting pressure through various avenues: duplicating the architecture of the international order, bolstering its military capacity and challenging access in the global commons. While much attention has been focused on China’s pursuits in the Asia Pacific and within the global economic system, Beijing is also advancing its interests in the stars above.

Take for example China’s plans for a manned space station. Due largely to counterproductive U.S. legislation, China has been barred from participating in the International Space Station. Rather than call it quits, Beijing has resolved to make its own station instead. If this sounds familiar, it’s because China has reacted in the same way when denied inclusion as an equal in prominent international institutions on Earth. The textbook example of this is China’s launch of the Asian Infrastructure Investment Bank (AIIB) following the U.S. Congress’s refusal to allow Beijing a greater say in the International Monetary Fund, a mainstay of the Western-led international order. Experts believe Chinese motivation for the space station is their unmet desire to be accepted as a major power that sets the rules on the world stage, which echoes the motivation analysts infer for the AIIB. And as with the AIIB, which attracted fifty-seven founding nations, including close U.S. allies, the Chinese space station is pulling major powers into Beijing’s orbit. The European Space Agency and others have already voiced interest and signed preliminary cooperation agreements.

Also significant is China’s buildup of its military capability, a key component of its potential to exert influence over the international order. This has extended into Earth’s orbit, where China has advanced its anti-satellite (ASAT), command and control, and intelligence technology, in line with a military doctrine that underscores the importance of parity in space. This has strong implications for the United States and the international order it undergirds, as U.S. superiority in the “ultimate high ground” of space gives the American military a technological edge that is indispensable on the modern battlefield.

With growing military capacity comes the ability to contest freedom of movement in the global commons. In the expansive global commons of outer space, China’s ASAT technology affords it an increasing ability to deny access and disrupt assets critical to the global economy. While these same developments unfolding in the South and East China Seas are of more immediate concern, free movement of satellites within space is vital, contributing to approximately $1.6 trillion of U.S. commercial revenue.

The prescription for dealing with Chinese pressure on the international order is much the same in space as on land: build on the order’s strengths, and adjust it for an increasingly multipolar environment. The United States should pursue cooperation with China on benign space research to better integrate China as a partner in the established order and to afford U.S. security strategists a window into Chinese decision making and intentions. The State Department’s recent cooperation initiative is a step in the right direction. Simultaneously, the United States should promote deterrence by improving on an array of resilience and counterspace abilities, but without growing alarmism—after all, often cited as the greatest threat to national security in space is floating junk. Finally, reviving the political will to maintain U.S. leadership in space and abroad will be a boon to national security. All this will help ensure that destabilization of the international order doesn’t fly over our heads.

Laura Daniels works at a leading Washington, D.C., think tank where she specializes in U.S. foreign policy and grand strategy. She holds a Master of Public Administration in International Security Policy from Columbia University.