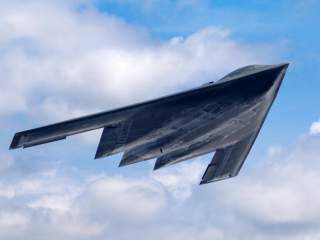 China appears to be building a new high-frequency radar on an artificial feature in the Spratly Islands that could allow Beijing to track even the stealthiest American warplanes, including the Lockheed Martin F-22 Raptor, F-35 Joint Strike Fighter and even the Northrop Grumman B-2 Spirit. The Center for Strategic and International Studies has acquired satellite evidence of the construction.

“Placement of a high frequency radar on Cuarteron Reef would significantly bolster China’s ability to monitor surface and air traffic coming north from the Malacca Straits and other strategically important channels,” reads a report from the Center for Strategic and International Studies. “Improved radar coverage is an important piece of the puzzle—along with improved air defenses and greater reach for Chinese aircraft—toward China’s goals of establishing effective control over the sea and airspace throughout the nine-dash line.”

Moreover, the Washington-based think tank has a specific reason to believe that the new radar is a high-frequency set. “Two probable radar towers have been built on the northern portion of the feature, and a number of 65-foot (20-meter) poles have been erected across a large section of the southern portion,” reads the report. “These poles could be a high-frequency radar installation, which would significantly bolster China’s ability to monitor surface and air traffic across the southern portion of the South China Sea.”

While the system is called a high-frequency (HF) radar—that’s bit of a misnomer. HF radars actually operate on low frequencies relative to the VHF, UHF, L, S, C, X and Ku bands, which are more typically used by military radars. These low frequencies have waves that are several meters long and, consequently, most stealth aircraft show up on HF radar. In order to defeat low frequency radar, a stealth aircraft has to eliminate features like fins, which is why the flying-wing shape is the best way available to avoid detection. That is because there is an omnidirectional resonance effect that occurs when a feature on an aircraft—such as a tail-fin—is less than eight times the size of a particular frequency wavelength. As a result, there is a step change in radar cross section once that threshold is exceeded. Since every stealth aircraft currently in America’s fleet exceeds that threshold—even the B-2 is not large enough to avoid most HF radars—every U.S. aircraft would show up on the Chinese radar. Indeed—all stealth aircraft will show up at some frequency. That’s just physics.

But it’s not all bad news. While HF radar can detect and even track stealth aircraft to a degree, it is not anywhere near precise enough to guide a weapon. The problem with HF-band radars is that they have a very long pulse width and a very low pulse repetition frequency [PRF]. That means HF are very poor at accurately determining range, altitude and precise direction. Indeed the radar resolution cells could be several miles wide. The best an HF radar can do is cue other sensors to search a volume of airspace or direct fighters toward a roughly defined search area.

In the case of a war, the Pentagon would have to eliminate those radars before launching a strike—similar to how Army AH-64A Apache gunships eliminated Iraq's low-frequency search radars during Operation Desert Storm.