Look Out, America: China's Missile Deployment Is Only the Beginning 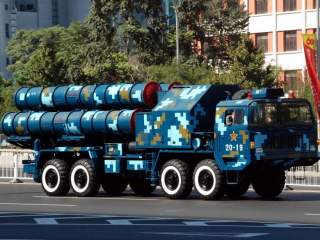 China has deployed the powerful HQ-9 air and missile defense system to Woody Island—also known as Yongxing—in the Parcel archipelago, marking a new level of escalation in Beijing’s quest to control the South China Sea. The disputed island—which has been inhabited by about 1,000 Chinese citizens since 1956—is also claimed by Vietnam and Taiwan.

The addition of the HQ-9—which was first reported by Fox News on February 17—would greatly increase the People’s Liberation Army’s air defense capabilities in the region. Like the Russian-made Almaz Antey S-300 air defense system, the HQ-9 has the ability to render vast swaths of territory into virtual no-fly zones. Only the Lockheed Martin F-22 Raptor, F-35 Joint Strike Fighter and Northrop Grumman B-2 Spirit stealth bomber can safely operate in the vicinity of an HQ-9 for any length of time.

Like the S-300P—on which it was partially based—the HQ-9 has a range of roughly 120 miles and can engage targets flying at 90,000ft. However, there are significant differences between the Russian and Chinese systems. Indeed, according to the Claremont and George C. Marshall Institute’s Missile Threat project, the Chinese system incorporates technology from the U.S. Patriot missile defense system. Further, some sources suggest that the HQ-9—unlike its American and Russian contemporaries—uses active electronically scanned array radar technology.

According to Missile Threat, the Chinese developed much of the HQ-9’s technology from a Patriot battery Beijing acquired from Israel. As such, it is possible that the HQ-9’s guidance system is modeled on the Patriot’s. Which means that the HQ-9 might use the Patriot’s “track-via-missile” guidance system—allowing the HQ-9 interceptor to fly directly at an incoming missile. The HQ-9—like the Patriot—would either explode as it nears the target or directly hit the incoming missile. Either way, the incoming target is either destroyed or knocked off its trajectory.

The HQ-9 is competitive with Russian and American air defense systems—indeed, NATO member Turkey had intended to purchase a variant of the weapon until the deal eventually fell through late in 2015. However, the very fact that the HQ-9 could compete for an international missile tender against American, Russian and European systems—and win—is an indication of just how capable the Chinese weapon is.

According to Fox News, which reported its findings based on satellite imagery from ImageSat International (ISI), the Chinese have deployed two batteries of HQ-9s consisting of eight launchers. While the Pentagon confirmed the apparent HQ-9 deployment, Beijing dismissed the reports—saying that the defenses had been in place for years. “As for the limited and necessary self-defense facilities that China has built on islands and reefs we have people stationed on, this is consistent with the right to self-protection that China is entitled to under international law so there should be no question about it,” Wang Yi told reporters in Beijing according to Reuters.

News of China’s missile deployment to Woody Island also comes on the heels of U.S. President Barack Obama stating that the militarization of South China Sea must stop. “We discussed the need for tangible steps in the South China Sea to lower tensions, including a halt to further reclamation, new construction and militarization of disputed areas,” the president said during a U.S.-ASEAN press conference in Rancho Mirage, California, on February 16. “Freedom of navigation must be upheld and lawful commerce should not be impeded,” he added.

Despite Obama’s calls to halt the militarization of the South China Sea, Beijing’s deployment of the HQ-9 is likely just the beginning. China seems intent on building up its forces on various islands in the area to shore up its territorial claims and to further its goals of pushing the U.S. military out of the western Pacific. It’s all part of China’s emerging anti-access/area denial strategy.