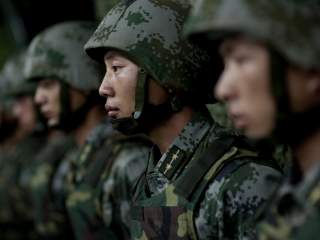 Amidst the New Year transition from 2015 to 2016, the Chinese announced the first set of long-awaited major military reforms.

These new services will join the PLA Navy (PLAN) and PLA Air Force (PLAAF). This constitutes an enormous shift in the organization of the Chinese military.

The PLA has now broken out the ground forces to its own command, making it a separate service. This is a fundamental change, marking an enormous shift in the balance of political power within the PLA, as the ground forces no longer are automatically associated with the four General Departments that actually run the entire PLA.

This marks, on the one hand, at least a nominal downgrading of the power of the ground forces, since the four General Departments were actually bureaucratically superior to the services.

Peter Mattis of the Jamestown Foundation outlined one of the challenges, the implications for the Chinese military’s intelligence functions, as the ground forces are separated from the General Staff Department. Similar problems are likely to arise for the other General Departments.

Prior to this reorganization, the Second Artillery was not a service in its own right, but was a “super-branch.” The “first artillery” was the conventional, tube/rocket artillery of the ground forces.

This reorganization, however, elevates the Second Artillery to full-blown service status (in the process of renaming it).

While this has important bureaucratic implications (as the Rocket Force will now be treated as a true co-equal to the ground forces, navy and air force), it remains to be seen what policy implications will emerge. In particular, it will be interesting to see what kind of strategic mission is assigned to the PLA Rocket Force.

This Strategic Support Force would seem to constitute its own service, one which will control the key forces for “local wars under informationized conditions,” i.e., space and cyber forces.

This arguably reflects the importance the PLA attributes to the ability to fight and win in these major new domains, which are regularly described in Chinese writings as the new strategic high ground.

The decision to group them into their own service also reflects a political loss for the Chinese air force (which has long lobbied that it should control space, just as the United States Air Force does).

Despite its strategic mission being officially “conduct integrated air and space operations, prepare for both offense and defense,” the Chinese air force apparently will not have control over space forces (although the precise delineation of responsibilities remains to be seen).

Dean Cheng is The Heritage Foundation's research fellow on Chinese political and security affairs. This article first appeared in the Daily Signal.

Image: Wikimedia Commons/Chairman of the Joint Chiefs of Staff.