Look Out, America: A Russian Su-27 Barrel-Rolled Over a U.S. Aircraft 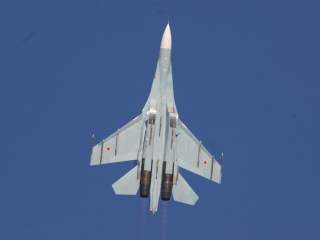 The aggressive display by the Russian jet—reminiscent of the opening scene of the 1986 action movie Top Gun, in which Tom Cruise plays a U.S. Navy fighter pilot who flies inverted over a Russian plane—came just three days after a pair of Russian Su-24 bombers buzzed the destroyer USS Donald Cook while the American vessel was sailing in the Baltic.

The Pentagon routinely flies RC-135s in international air space near Kaliningrad in order to gather intelligence on Russian military movements in the region. Kaliningrad lies between between Lithuania and Poland—both NATO members—and is geographically separate from the rest of Russia. If Moscow were to attack the Baltic states, Kaliningrad would be the likely jumping-off point.

In April 2015, an Su-27 nearly collided with an RC-135 snooping near Kaliningrad. And in August 2014, Russian fighters—presumably Su-27s—acted so aggressively around one RC-135 that the American crew actually fled. . . accidentally crossed into Swedish air space.

Thirteen years earlier, Chinese jet fighters buzzed a U.S. Navy EP-3 spy plane near Hainan. A J-8 fighter accidentally struck the American aircraft. The J-8 pilot died; the American crew had no choice but to land their damaged plane at a Chinese airfield. Beijing released the crew after eleven days—and the spy plane after four months.

But then, the Americans have also been known to fly very close to enemy planes in order to intimidate them—and not just in the movies. In March 2013, an Iranian air force F-4 fighter attempted to intercept a U.S. Air Force MQ-1 Predator drone flying in international airspace near Iran.