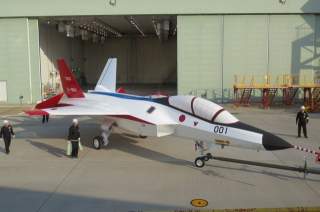 Japan publicly unveiled its Mitsubishi Heavy Industries X-2 stealth fighter demonstrator earlier today in Toyoyama. If all goes as planned, the prototype aircraft will take to the air in the middle of February for a series of flight tests—making Japan the fourth nation to demonstrate such capabilities. This comes after a year in which Prime Minister Abe has sought to broaden his nation’s military capabilities and reach.

Unlike the Pentagon’s Lockheed Martin F-35 Joint Strike Fighter, the X-2—which until recently was called the ATD-X—is optimized for high agility and boasts three-dimensional thrust vectoring. The aircraft incorporated a series of three paddles to vector thrust in the desired direction—similar in concept to the German-American Rockwell/Messerschmitt-Bölkow-Blohm X-31 testbed of the 1990s.

The F-35 “is not that maneuverable, but the X-2 is stealthy while boasting high maneuverability,” Takahiro Yoshida, project director at the Japanese defense ministry's acquisitions agency told the Nikkei Asia Review.

Once the X-2 starts flight-testing next month, it will be flown for about two hundred hours to gather aerodynamic performance data. After the tests are complete, the demonstrator will be handed over to the Japanese defense ministry next March. Japan will make a decision by March 2019 on either developing the X-2 into an operational warplane or using the knowledge gleaned from the program to partner with another country such as the United States for a joint development effort.

The X-2 is demonstrator aircraft—it does not currently incorporate full stealth capability. Rather, it features shaping and technologies roughly approximating a stealth aircraft. Basically, it’s similar in concept to the Lockheed Martin X-35, which was eventually developed into the current F-35.

A lot of work remains to be done to develop the avionics, engines, materials, weapons bays—which the X-2 does not have—and thrust vectoring system before it could be applied to an operational aircraft. The thrust-vectoring panels—as they are currently mounted—are not conducive to stealth. Even though Japan has spent $331 million on the X-2 thus far, that’s just a fraction of the roughly $60 billion price tag needed to develop and field a modern stealth combat aircraft.

Japan is not likely to develop the X-2 into a fully operational stealth aircraft—the cost is just not worth it for a limited production run. Instead, the country is likely setting itself up to participate in a future co-development effort with an international partner. The most likely partner would be the United States, which is gearing up to develop the F-X and F/A-XX follow-ons to the F-22 Raptor and F/A-18E/F Super Hornet.

The Japanese have long coveted the Lockheed Martin F-22 Raptor, but U.S. law prevented the export of the stealthy air superiority fighter. As with the U.S. Air Force, Tokyo will eventually need to replace its current fleet of Boeing F-15 Eagles. That means that Japan might try to partner with the United States on whatever emerges from the U.S. Air Force’s F-X analysis of alternatives in the coming years. Having demonstrated that Tokyo has useful technical capabilities to share might help to convince Washington to allow Japan to participate in that sixth-generation fighter project from the outset.

Dave Majumdar is the defense editor for the National Interest. You can follow him on Twitter: @davemajumdar