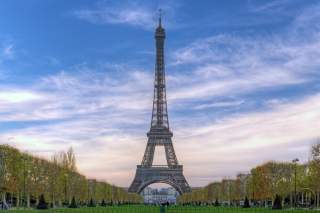 Europe's refugee crisis has escalated from tragedy to farce. More than 2000 people have died this year trying to enter Europe via the Mediterranean -- on top of unknown numbers who perished in the Sahara Desert on their way to Libya to risk the sea crossing. Thousands more languish in smuggler's dens or Ukrainian prisons.

But for the lucky many who make it to the shores of the European Union (arrivals now exceed 100,000 a month) the journey has just begun. African and Middle Eastern boat migrants do not want to stay in Italy and the Italian government is only too happy to pass them through. Train conductors turn a blind eye to migrants headed north.

Under pressure from the liberal internationalist intelligentsia, buck-passing has become a carnival act farther east in Macedonia. Thousands of refugees had piled up on Macedonia's border as they tried to travel north from Greece toward Germany, Scandinavia, and the United Kingdom. Reporters flocked to Macedonia to expose the Balkan country's harsh border enforcement.

Macedonia, sensitive about its human rights record, did the only logical thing: it opened its border, scheduled extra train and bus services, and herded migrants north to Serbia. Serbia is likely to do the same, passing the burden on to Hungary, which lies on the edge of the European Union's visa-free Schengen area. Hungary is rushing to build a border fence to keep them out.

But these migrants do not desire refuge in Hungary any more than they desire refuge in Italy, Greece, Macedonia, or Serbia. In fact, they refuse to accept refuge in any of these countries. They want to be registered as refugees in northern Europe, where they (probably correctly) believe that they can build better lives than in the austerity-wracked south.

These migrants are willing to make enormous sacrifices so that their children's children can be born in the world's richest countries. They are, in effect, citizenship shopping -- not just for themselves, but for future generations of their families. They certainly have no intention to return to Afghanistan, Eritrea, or Syria if and when peace is restored. They are on a one-way road to a better future.

This is nothing new. For years it was stories from Calais about African and Middle Eastern refugees trying to sneak through the Channel Tunnel to England. People died in ones and twos as they were run over by trucks, slipped off the bottom of train cars, or drowned trying to reach ferries making the 20-mile passage to Dover.

The camps in Calais came to be known as "the jungle" and a succession of British prime ministers and French presidents have been excoriated for not offering shelter to the hundreds and then thousands of people stranded in France on their way to pursue their dreams in England.

Now this trickle has turned into a flood and the bizarre standoff at the entrance to the Channel Tunnel has turned into a continent-wide crisis. No one denies that these Africans and Middle Easterners are fleeing terrible conditions in their home countries. No one should deny that they should be offered safe refuge. But equally no one should assert that these or any migrants have a human right to refuge-shop in the country of their choice.

Proponents of open borders often point to the American experience. How can Americans put up fences when our own ancestors were, for the most part, economic migrants who came to America in the simple pursuit of a better life? Shouldn't Europeans embrace the American example and open their borders to people fleeing terrible circumstances in Africa and the Middle East?

From the comfortable distance of the twenty-first century it is easy to forget that the price of America's openness to immigration was the genocide of dozens of Native American nations. Most Americans alive today are the beneficiaries of this genocide. But it is not an attractive model for Europe -- or even for contemporary America.

In Search of Welfare:

Today's economic migrants to Europe and America are not looking for virgin soil to farm on the open range. They are seeking welfare services. Liberal intellectuals cringe at the charge that refugees are welfare migrants, but these liberal intellectuals fail to understand the scope and scale of the modern welfare state and what it means for migrants.

In most countries direct income support ("welfare") payments to migrants are relatively small. Few people would expose their children to the dangers of people smuggling and the challenges of adjusting to life in a foreign land for a mere pittance in government handouts. But welfare means much more than handouts.

Migrants don't somehow manufacture better lives through sheer sweat and toil. The age of the immigrant homesteader is long since gone. Like the rest of us, immigrants rely on state welfare institutions to provide the societal structure that supports modern life.

You can't blame people for wanting to see their children graduate from British universities or their grandchildren born in Swedish hospitals. But it is sheer madness to allow people to use the refugee system for this purpose. It creates massive perverse incentives for migration, not to mention resentment among host populations. Not only is this mad -- it is tragically unsustainable.

The liberal internationalists who advocate extensive refugee search and rescue in the Mediterranean and the free passage of refugees across Europe have in effect created a system that encourages people to threaten that they will commit suicide at sea unless their children and future generations of their families are given European citizenship and the opportunities this provides for upward mobility in the global status hierarchy.

Let us not perpetuate the myth that refugee status is not a pathway to citizenship, since the same liberal internationalists who advocate for the acceptance of migrants also decry the deportation of people who came to the developed world as babies and have no knowledge of their nominal countries of citizenship. Listen to any interview with the people reaching Europe today. They have no intention of going back.

Every successful threat of "admit me or I will drown" encourages thousands of others to play the same dangerous game of chicken. And (thankfully) most of them don't drown. The figures suggest a death rate of less than 0.5 percent. Unfortunately, millions of people are willing to risk a 0.5 percent risk of death to get themselves and their families to ultimate safety and prosperity. The risk of staying in Afghanistan, Eritrea, or Syria may be much higher.

That doesn't imply that the European Union should just let people die at sea. With great power comes great responsibility, and even if European countries' maritime capabilities leave much to be desired they are certainly up to the challenge of Mediterranean search and rescue. Europe must save lives.

European countries should save lives but they should insist on booking refugee claims immediately, either on ship or shoreside, before discharging asylum seekers into the general population. Asylum seekers who refuse processing should be detained, just as they would be at an airport. Since this would inevitably place an undue burden on Greece and Italy, the EU should take financial responsibility for supporting refugees.

There should be no mobility northward and no civilian resettlement until claims have been processed, and if necessary force should be used to restrict asylum seekers to a limited area while they make their claims. This is not about cruelty. It is about control.

Here Europe should study Australia's experience with boat arrivals. Australian governments have learned to impose control but unfortunately have not learned to do so without cruelty. Australia's abuse of black site offshore detention centers closed to press scrutiny is unworthy of a civilized society. But the underlying determination to "stop the boats" is the right goal.

If Europe wants to learn from Australia's successes while avoiding Australia's shame it should offer irregular migrants arriving by sea the tough love of making sure that their economic aspirations are thwarted. Every human story of the pursuit of a better life pulls at the heart. But the reality of tens of thousands of beggars on the streets of Italy and Greece should harden the mind.