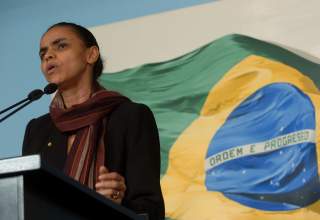 When presidential candidate Eduardo Campos’s airplane crashed amid stormy weather in the Brazilian port city of Santos in early August, it upended what was shaping up as a boring presidential race.

Campos’s tragic death propelled his running mate, former environmental minister Marina Silva, into his stead as the replacement candidate for Campos’s Brazilian Socialist Party (PSB), notwithstanding Silva’s recent conversion to the party. She agreed last year to join forces with Campos only after her own efforts to form a new party, the Sustainability Network, failed. Suddenly, with seven weeks until the October 5 first-round voting, Silva’s tragedy-infused campaign scrambled everything.

As the candidate of Brazil’s Green Party, Silva won nearly 20 percent of the vote in the the 2010 election, taking support from an unlikely coalition of leftist activists, environmentalists and relatively well-off urbanites, especially in the capital city of Brasília. Although she abandoned her presidential hopes in 2014 to join Campos’s ticket, Silva routinely polled better than any other alternative to Dilma Rousseff, who is running for reelection after a tumultuous first term. When she accepted the presidential nomination in mid-August, Brazilians believed that Silva would lead a leftist alternative to Rousseff and the candidate of the center-right Brazilian Social Democratic Party (PSDB), Brazilian senator Aécio Neves, an effective economic reformer and former two-term governor of the all-important central state of Minas Gerais.

Silva, who grew up on an Amazonian rubber plantation, and who was illiterate until age sixteen, began her career in politics defending the Amazon’s rainforests. Though many world politicians have mimicked the “change” mantra of Barack Obama, Silva—who would be the first Brazilian president of African descent—inspires much of the same feeling among Brazilians as Obama often inspired among Americans in his first, historic presidential campaign.

In contrast, Rousseff seeks to extend the twelve-year rule of the entrenched, scandal-weary Workers’ Party (PT) for a fourth consecutive term. Neves, whose grandfather Tancredo Neves was appointed the first post-dictatorship president in 1985, is the quintessential insider, and his party is still tarred with the economic upheavals of the 1990s and the now-discredited “Washington consensus” approach.

Almost as surprising as the tragic events that led to her presidential candidacy is the way in which Silva has become the most conservative of the three major candidates. That’s one of the reasons why Silva has so successfully supplanted Neves as the chief alternative to Rousseff and why polls show, even weeks after the initial shock of Campos’s death subsided, that Silva presents a very real threat to Rousseff in the October 26 runoff. Rousseff has gained back some support in the final weeks of the campaign, given her massive spending advantage and the benefits of incumbency, and that’s eroded Silva’s support significantly. The latest Datafolha poll gives Rousseff 40 percent to 25 percent for Silva and 20 percent for Neves. In the runoff, the poll gives Rousseff a 49 percent to 41 percent lead—Rousseff has only recently regained the lead in Datafolha’s runoff survey since Silva’s entry into the race. But Silva is still favored to squeak through into a direct runoff and if she does, there’s reason to believe that the race could tighten once again.

Long before Silva’s challenge, investors both inside Brazil and abroad were grumbling that the Rousseff government’s heavy-handed economic policies have been too interventionist, and that it is unable to stop Brazil’s economic slowdown—its GDP growth declined to just 2.5 percent in 2013 and is forecast to be just 0.7 percent this year—or even stabilize the collapse of the real, Brazil’s currency.

Far from running to Rousseff’s left on economic policy, Silva and her top advisors, including former senator Maurício Rands, have emphasized a platform that borrows heavily from the kind of neoliberal approach that you might expect from Neves, who comes from the same party as former president Fernando Henrique Cardoso. Cardoso’s privatization efforts won the scorn of many Brazilians, even as his administration brought macroeconomic stability to Brazil after years of inflation. Silva and her campaign have pledged not to raise taxes and not to deploy foreign reserves by artificially inflating the real’s value in currency markets. She also indicates that she will take a more disciplined measure on budget spending.

Even more astounding is the way in which Silva, who resigned as Lula da Silva’s environmental minister in 2008 because of his government’s willingness to consider development initiatives in the Amazon, has demonstrated her pragmatism on energy policy. Today, she’s embraced both large-scale hydroelectricity projects and offshore oil development, though she was hostile to both as a government minister.

She’s put forward such a moderate economic platform that high-level tucanos (“toucans”), as members of Neves’s PSDB are known, have all but announced that they will join forces with Silva in the runoff against Rousseff. That could make a huge difference, given that the PT and the PSDB have much deeper bases than the Socialists or Silva’s own personal political networks. Today, Rousseff is benefitting from a television-advertising edge, but Silva will have equal funding for television in the three-week runoff campaign.

Moreover, as a Pentecostal Christian, Silva belongs to the growing evangelical movement in Brazil and might also be the most socially conservative candidate in the race. Staunchly anti-abortion, Silva backtracked on same-sex marriage earlier in the campaign, expunging support for marriage equality from the Socialist platform. Silva will appeal not only to 22 million evangelical Brazilians, but also to conservative Catholics as well, many of whom believe Rousseff is secretly pro-choice, an issue that nearly torpedoed her 2010 election.

On foreign policy, Silva and her team have signaled that they would like to enhance Brazilian trade with the United States, and they have indicated that a Silva administration would pursue a more balanced foreign policy, which will delight Washington and spook both Caracas’ increasingly desperate government and the glacial, gerontocratic government.

Though Lula da Silva transformed Brazilian governance by introducing social welfare programs, such as the Bolsa Familia, which provided direct cash transfers to the poorest Brazilian families, he also championed Brazil’s business interests, facilitating an economic boom that is only recently starting to sputter. But no one expects either Silva or Neves to roll back the lulista reforms if elected. It’s not an overstatement to say that just about all of the Latin American center-right and much of the Latin American left are all lulistas now.

Moreover, Silva, who started off as a member of the Workers’ Party, is arguably as much the heir of Lula da Silva’s legacy as Rousseff. By introducing a new perspective to Brazil’s government, a Silva presidency might reform and refresh the principles that have made Lula da Silva, even today, such a beloved figure within Brazil and Latin America, even as his party finds itself struggling to fend off corruption allegations, charges of economic mismanagement and accusations, going back to widespread protests last summer, that Rousseff has placed vanity projects, like hosting the 2014 World Cup and the 2016 Summer Olympics, over more fundamental issues like the cost of public transportation, health care and education.

When Silva entered the race, critics and fans alike worried that she would live up to her reputation as something of an undisciplined and uneven candidate. Despite a few hiccups, like her volte-face on gay marriage, she has run an impressively focused campaign and demonstrated her ability and will to build a broad-based majority.

Brazilians who remember the excitement of the 1990 election, the first to follow two decades of military dictatorship, when voters turned to the dashing forty-year-old Fernando Collor, will also remember the disappointment of his ensuing corruption scandals and impeachment two years later. Since then, voters have turned to well-known political veterans, including Cardoso, Lula da Silva and Rousseff, who served as Lula da Silva’s energy minister and chief of staff before her election in 2010. That could also give voters second thoughts about Silva.

But with days to go until the first round, Brazilians might find that Silva represents the most conservative choice of all—she offers the corrective policies that voters might expect from Neves or a change in administration, while also embodying a certain amount of continuity with the lulista left. That’s all in addition to the symbolic appeal of Silva’s election as representative of Brazil’s promise of greater racial and socioeconomic equality.

Kevin A. Lees is an attorney in Washington, D.C., and the editor and author of the foreign policy website Suffragio.org.