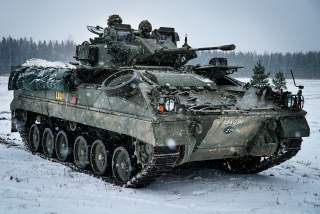 U.S. Defense Secretary Jim Mattis is reaffirming that NATO remains the United States’ most important alliance. That is despite a perception that the Trump Administration is skeptical of the alliance.

“NATO remains our number-one alliance.  So I spent a fair amount of time on that effort at EUCOM.  Obviously heartened coming out of the NATO ministerial would be an understatement, but the continued climbing of the defense budgets,” Mattis told reporters on Feb. 17.

“Having an alliance doesn't mean you don't have issues between allies. Of course you do.  Every nation has its own interests. But just to look around that room, again, and see 29 nations all working together to work those issues, you have to remember the fundamental strength of that alliance.”

Mattis indicated that the alliance is starting to make progress on sharing the military burden between the United States and Europe—where Washington has been carrying the lion’s share of the load for the past quarter century.

“Basically you see a much stronger European focus on defense,” Mattis said. “You know, for these democracies, and you know that some of them have been through economically very challenging times, going back now 10 years, and they're coming out of it.  But you see the defense portfolios being raised everywhere.”

No longer does one see declining European defense outlays from year to year, Mattis said.

“As you recall, the dollars and euros, whatever is spent on defense across European are going down every year, until about three, four years ago,” Mattis said. “And they have gone up every year since this year —or, excuse me, 2017 obviously was the biggest growth in NATO defense spending since the turnaround, but it continues to go in that direction.”

Mattis acknowledged that not every NATO member state has committed to reaching the two percent of gross domestic production defense spending target for the alliance, but cited progress in that regard.

“While not everybody is committed yet to 2.0, and not everybody has submitted their national plans either, so, yes, welcome to reality,” Mattis said. “In some nations it takes parliamentary work.  In some nations it takes different commitments that they'd rather put together, but those are all going in the right direction, especially when you look at it in aggregate, when you look at it in terms of the larger countries, when you look at the fact the Germans have been without a government for some months now, and they're still putting it together. It looks very good.”

One example Mattis cited of progress was Berlin—there is positive movement in Germany’s position on security spending.

“To hear [German Defense] Minister [Ursula] von der Leyen in very pointed comments about Germany moving into more of a projecting security, than simply, you know, providing development funds only,” Mattis said. “They do keep a very strong balance in their form of government between development and defense. I see no problem with that.  I endorse it and support it.  And you're aware that the Americans continue to put out hundreds of millions of dollars a year, billions total, in development funding.”

Thus, at the end of the day, despite the early rhetoric from the Trump Administration, the NATO alliance is more or less conducting business as usual.