Mattis: Russia Has Chosen To Be a "Strategic Competitor" 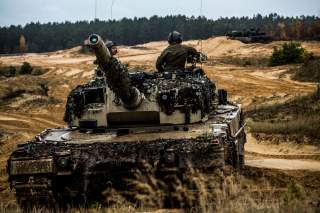 The United States places the blame on Russia for the breakdown in relations between NATO and Moscow. In the view of U.S. Defense Secretary Jim Mattis, Russia chose to be strategic competitor to the United States and NATO.

“The NATO alliance tried to create a partnership—so, there's a Russia-NATO partnership council,” Mattis told reporters on March 27. “There is a mechanism to keep us working together.  And I think a number of us with my color hair can remember Russian marines in North Carolina working with U.S. Marines as we prepared for possible deployments together on U.N. peacekeeping missions—humanitarian relief.”

However, that attempt at building at partnership with Russia has now passed.

“That, regrettably, by Russia's choice, is now a thing of the past,” Mattis said. “It's not currently in the works because Russia's chosen to be a strategic competitor, even to the point of reckless activity.  And that's the only thing that it can be called to the innocent people in Salisbury who were exposed to, possibly—to the potential of being murdered by this stuff.”

Mattis did not delve into the complexities of what is driving Russia’s antipathy towards NATO—such as the alliance’s continued expansion towards the Kremlin’s much-truncated post-Soviet borders. Mattis did not delve into details such as the assurances that Western leaders made to then Soviet leader Mikhail Gorbachev that NATO would not expand eastwards from what was then the West German border as newly uncovered documents show.

Nor did Mattis mention that Russian resentment toward the alliance is also partially fueled by assurances from the Clinton Administration to former Russian president Boris Yeltsin that the so-called Partnership for Peace was an alternative to NATO expansion as documents from the era show. Much of Russia’s hostility towards the West is driven by the NATO alliance’s push towards its borders and expansion into the former Soviet Union itself.

Nonetheless, Mattis said that still has the potential to be a partner in Europe—and that Moscow’s fortunes are tied to Europe.

“Russia has the potential to be a partner with Europe.  Its fortunes are married to Europe, if it sees its way forward. And I think that, right now, we have to recognize that they've chosen to seek a different relationship with the NATO nations,” Mattis said. “So it is what it is.  And the expulsion of numerous Russian diplomats around the region, from—and regions all the way to Australia, Europe, North America—you can see that the nations that have been, perhaps, slow to leave behind the opportunity for a partnership with Russia are now acting on the actions that Mr. Putin has taken.”

In Mattis’ view, the recent coordinated expulsions of Russian diplomats is an example of the liberal international world order pushing back against Moscow’s revisionist goals. “I think we have to show where all of these democracies stand together,” Mattis said. “Notice what is emblematic of each of the countries that's evicting Russian diplomats right now.  I notice the one common thread. Some have a queen, some have a president—they're all democracies. And I think that's the statement about how you get to them.”