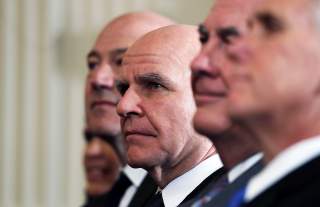 National security adviser Lt. Gen. H.R. McMaster laid out a vision of the international order at the Munich Security Conference that stands in stark contrast to President Donald Trump’s campaign promises. Where Trump had campaigned on what some might describe as a nationalist foreign policy that puts America’s interests first and foremost, McMaster championed an unabashedly liberal internationalist vision that conforms to the ideology of the Washington policy establishment.

“President Trump has called for stronger alliances and partnerships based on shared values, shared interests, shared responsibilities, and shared burdens,” McMaster said on Feb. 17. “Today, I would like to highlight three priority areas that demand our collective efforts: first, ensuring the non-proliferation of weapons of mass destruction and deterring their use; second, defeating jihadist terrorist organizations; and third, strengthening the international foundations for peace and prosperity.”

Indeed, in contrast to the president’s own prior statements, McMaster championed international institutions that form the basis of the liberal institutional world order. “To ensure progress in counterterrorism and non-proliferation, we must also focus on a third area that transcends all efforts: strengthening the international foundations of peace and prosperity,” McMaster said. “In this arena, we have much work to do. International institutions created to foster peace and facilitate cooperation are under threat by nations that subvert and corrupt their intended purpose. For example, some of the most egregious human rights abusers sit on the United Nations Human Rights Council. And trade organizations, like the WTO, have been unable to constrain countries that ignore its stated principles and refuse to follow its rules.”

McMaster called for reforms to strengthen the very institutions that the president had previously decried as being hostile to American interests. “We must actively cooperate to protect, reform, and strengthen these institutions so that they honor their original aims—and serve the interests of states that value the rule of law and human dignity,” McMaster said.

McMaster also took indirect—but specific—aim at Russia and its leader Vladimir Putin. “Some of the most dangerous forms of aggression fall below the threshold of military action,” McMaster said. “We cannot allow repressive and revisionist powers to diminish our confidence in our sacred principles, to undermine our free market system, or to interfere in our democratic processes. As you have seen in recent days, the United States will expose and act against those who use cyberspace, social media, and other means to advance campaigns of disinformation, subversion, and espionage.”

However, it must be noted that there are persistent rumors that McMaster is on the outs with the president and that Trump is hoping to return the general back to the Pentagon sooner rather than later. Thus, McMaster might not truly speak for the president.

When asked what role McMaster might play if he returned to the military, Pentagon spokeswoman Dana W. White declined to directly answer the question. “General McMaster is serving the president of the United States, and he has a very distinguished career. Any decisions that will be made with respect to any changes or decisions will be the White House,” White said.