McSally's Quest for a Lethal Next-Gen A-10 Warthog 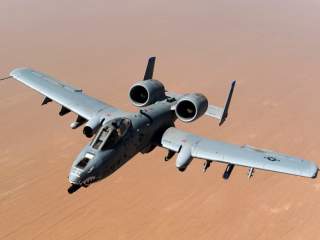 Former Fairchild Republic A-10 Thunderbolt II squadron commander and current U.S. Congresswoman Martha McSally (R-AZ) is calling on the Pentagon to budget for a next-generation replacement for the venerable jet affectionately known as the Warthog.

“The U.S. Air Force needs a next-generation A-10 before attempting to mothball any further A-10s. The specific mission set for CAS/FAC-A/CSAR requires a specific aircraft, not one that is a jack-of-all-trades but a master of none,” McSally wrote in a January 28 letter to President Barack Obama and Defense Secretary Ashton Carter. “In a March 17, 2015 HASC hearing, both the Secretary and Chief of Staff of the Air Force confirmed that mothballing the A-10 was driven only by budget constraints and not by strategy.”

McSally emphasized that despite the Air Force’s protestations, there are certain mission that only the A-10 can perform. “There is no aircraft, either in the fleet or in development, that can replace the Warthog’s unique capabilities. The Air Force has proposed that other aircraft, such as the F-35, could perform the CAS mission. However, in testimony last year, the DOD’s Director of Operational Test and Evaluation Dr. Michael Gilmore admitted that the F-35 is less survivable from a direct hit and would perform ‘standoff CAS,’” she wrote. The congresswoman added:

“There are times, and there will be future times, where you must provide very close air support to the troops on the ground who are often on the run or unable to provide coordinates. I have flown CAS missions in these conditions where the pilot must visually identify friendly forces and enemy combatants to hit the target and avoid fratricide. You cannot stand off in all CAS scenarios, even in the future.”

McSally wrote that it is the intent of Congress that the A-10 remain in service until a proper replacement is developed. “I hope that the restrictive language in last year’s National Defense Authorization Act and Omnibus Appropriations serves as an indication of Congress’s support for the A-10. My amendment to the National Defense Authorization Act for Fiscal Year 2016, which passed committee and both chambers with large bipartisan support, clearly outlines the intent of Congress to preserve the current A-10 fleet,” McSally wrote. “The Air Force cannot continue its duty to national defense without a dedicated CAS/FAC-A/CSAR weapon system. I look forward to working together to support the Air Force in maintaining the A-10 and beginning the process of developing a next-generation A-10 to support our national security and bring our brave troops home alive.”

What would a next-generation replacement for the legendary attack jet look like? A couple of years ago, I spoke to a group of around twenty highly experienced A-10 pilots and engineers working on unofficial specifications for a successor to the Warthog to answer that very question. The group began by using the original A-X program requirements that resulted in the Warthog starting nearly fifty years ago. Even though technology has advanced since then, the fundamentals of what is required for the close air support mission have not changed.

“There is a lot that can be made better than the A-10,” Pierre Sprey, a former Pentagon official and aerospace engineer who originated the Warthog concept told me at the time. “There is simply no question that we can make it better. The airplane was in a lot of ways a disappointment to me because of where it came out.”

According to Sprey, the A-10 is by far the most survivable aircraft for the low-altitude, low-speed CAS mission. But almost every aspect of the A-10 can be vastly improved using modern materials and construction techniques. However, The key to producing a new warplane quickly, on time and to budget is to use the best existing technology rather than trying to invent entirely new hardware and software.

The basic requirements for a “Warthog 2.0" are that it retains the A-10’s current capabilities. “These are the things we hold as the minimum requirements going forward in kind of a follow-on CAS platform,” one of the two A-10 pilots leading the group behind the prospective Warthog replacement project told me. “The slow speed and tight turn radius is what allows us to get below the weather and have a rapid rate of re-attack especially with the flexibility of the gun.”

As such, in a next-generation CAS aircraft, the pilot must have good visibility—which is why a round, expansive “bubble” canopy is crucial. “In an air-to-ground mode, being able to look out over your shoulder and behind you—not at threats, but the ground you just attacked or to keep an eye on the friendlies—is a critical capability,” the A-10 pilot said.

Because CAS missions often take place at very low altitudes and low airspeeds—anywhere from 150 knots to 300 knots—the aircraft must be able to perform a two-G sustained turn at a rate of five degrees per second with a turn radius of no more than 2,000 feet. The instantaneous turn rate—that is, how quickly a plane can wheel around in the first few seconds of a maneuver—would have to be better than twenty degrees per second while pulling six Gs. The aircraft must also be able to remain less than one mile from a target between attacks while pulling no more than two Gs—except for the roll-in to the attack and the time it's leaving the area. “The tight turn is important so that we can not only operate in a narrow valley if we need to, but lets says it’s reduced visibility, and we’re kinda poking our way through that visibility, the ability to do that slowly and being able to turn when you see a big hill coming is important,” one of the pilots told me.

One aspect of the Warthog’s design that must be fixed, however, are its engines. The A-10’s biggest shortcoming are its anemic twin General Electric TF-34 turbofan engines. A next generation A-10 replacement must have a lot more thrust.

“The number-one problem with the A-10 is that we’re underpowered,” said one of the pilots. “We need a way to get our airspeed back quicker and we need the ability to takeoff at max gross weight at high-density altitudes.”

The A-10 cannot take off at its maximum weight in places like Afghanistan and must either off-load weapons or fuel. The next-generation aircraft must be able climb out of a runway at maximum gross weight at a rate of the 4,000 feet per minute at a density altitude of 20,000 feet. Further, it must be able to operate out of a 3,000-foot runway at sea-level with a full fuel load and an internal gun. Ideally, it should be able to operate out of austere 1,500-foot runways.

A cruise speed of at least 360 knots is desirable, the pilots said. Initially, the group believed that it would be best for a next-gen aircraft to cruise at 480 knots with a dash speed of 540 knots. However, with Sprey’s input, the team came to the conclusion that such a requirement would be aerodynamically incompatible with a tight turn radius at low airspeed. “What we need and don’t have is the capability to rapidly get airspeed back after an attack,” one of the pilots told me. “Also, while airspeed can help response time, it’s loiter time that really makes response faster because it allows you to be at the battlefield, ready to attack.”

The prospective next-generation Warthog replacement needs to have a minimum combat radius of 150 nautical miles with at least four hours on station time with internal fuel, the pilot explains.

The new aircraft would have to be able to make a minimum of twenty attacks on infantry targets or eleven attacks on tanks during a single sortie. With precision-guided rockets, the new aircraft could potentially increase those numbers by an order of magnitude. Additionally, the Warthog 2.0 would also need to be able to track and kill moving targets from ranges greater than eight nautical miles while flying at altitudes above 20,000 feet.

To accomplish this the new aircraft would need to carry 15,000 pounds of weapons ranging from general purpose unguided bombs to cluster munitions, laser-guided bombs and GPS-guided Joint Direct Attack Munitions. It would also have to be able to fire 2.75-inch rockets—ideally something like the laser-guided Advanced Precision Kill Weapons System—plus at least six anti-tank missiles similar to today’s Maverick.

The aircraft would also need to be able to carry both versions of the 250-pound Small Diameter Bomb and potentially the AIM-9X air-to-air missile for self-defense. Ideally, it should be fitted with the AIM-120 radar-guided air-to-air missile, as well—but that’s not necessarily crucial. It is imperative, however,  that the aircraft carry a gun similar to the General Electric GAU-8 30-millimeter cannon installed on the A-10.

In terms of avionics, a next-generation aircraft would have to have all of the capabilities found on the modernized A-10C. The upgraded Warthog already has advanced data-links including the Situation Awareness Data Link and Variable Message Format link. It also has a direction finder to zero in on and interrogate pilot survival radios.