Meet Russia's Yak-130, the Killer Light-Combat Jet You Never Heard of (Until Now) 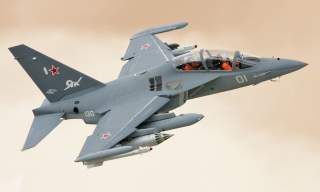 Developed in the immediate aftermath of the collapse of the Soviet Union, the Yakovlev Yak 130 is one of the best advanced trainer and light combat aircraft available on the international defense market.

The requirements for the aircraft were originally laid down during the late 1980s for a new trainer to replace the Soviet Air Force’s massive fleet of Czech-developed Aero L-29 Delfín and L-39 Albatros jet trainers. Five designs including the Sukhoi S-54, Myasishchev M-200, Mikoyan MiG-AT, and Yakovlev Yak-UTS were submitted. However, by the time of the final disintegration of the Soviet Union in 1991, only the Mikoyan and Yakovlev designs remained under consideration. With a newly independent Russia in an economic and social meltdown, funding was scarce and development proceeded slowly.

In fact, while the Yakovlev design bureau had more or less completed the basic design of the Yak-130 by 1993, the funding situation forced the company to look for outside investment even though the Russian Air Force selected its jet for continued development. As such, Yakovlev entered into a partnership agreement to co-develop and market the Yak-130 with Italian airframer Aermacchi that same year. As development continued, the first Yak-130D test aircraft made its maiden flight from the Gromov airfield on April 25, 1996.

The partnership between the two eventually soured and by 2000, the Russians and Italians went their separate ways. The Italians paid the Russian company $77 million for technical documentation on the Yak-130 and went on to develop their version of the aircraft as the Alenia Aermacchi M-346 Master, which serves with a number of Western air forces. The Italian version of the plane might even go on to serve in the United States Air Force if it is selected as the winner of the T-X trainer competition

Yakovlev—now part of the Irkut Corporation—continued development of the Yak-130 for its domestic market and finally beat out the MiG-AT on April 16, 2002, when it was selected for the Russian Air Force’s trainer requirement. Development continued relatively quickly from that point. On April 30, 2004, Roman Taskaev—Yakovlev’s senior test pilot—flew the first production configured Yak-130, which was built at the Sokol plant in Nizhny Novgorod.

Production moved to Irkutsk in 2006 while flight-testing was completed by 2009. The jet formally entered service with the Russian Air Force in 2010 and has been exported since 2011 to various Russian client states. Russia currently has about 95 of the jets in service while Belarus has eight. Algeria and Bangladesh each have 16 aircraft while Myanmar has 12 aircraft, with six more on order. Syria has also ordered 26 Yak-130s, but the status of those planes is unclear.

The Russian version of the Yak-130 has not done particularly well on the international market, but its Italian cousin the M346 is doing quite well having been adopted by Italy, Israel, Singapore, Poland and Turkmenistan. However, Leonardo—the manufacturer of the M346 aircraft—could win the contract for America’s T-X program. With the endorsement of the United States Air Force, the door would open for sales around the world.

As such, the basic design of the Yak-130 is sound and is a good performer that will likely capture more sales in both of its divergent variants. In terms of raw aerodynamic performance, the Yak-130 is not quite as spritely as its Italian derivative—owning mostly to the European jet’s superior Honeywell F124-GA-200 engines, lighter weight and somewhat slicker aerodynamics. However, the Yak-130 does offer excellent overall performance that does allow it replicate the performance of fourth and fifth-generation fighters for students.

Indeed, the Russian jet can maintain stable controlled flight at angles of attack of up to 35 degrees, which is similar to the capabilities of the jets such as the MiG-29, Su-30 and even Western types such as the F/A-18E/F Super Hornet. It also has an excellent thrust/weight ratio of 0.8, which allows the jet to sustain high g-forces, rate-of-climb and affords good take take-off performance.

Because its flight performance is close enough to a jet fighters’, both the Italian and Russian versions of the jet have been adapted as light strike fighter aircraft for the lower end of the market. The Yak-130 has nine hardpoints on which it can carry a maximum of 6,600 pounds of weapons including KAB-500 precision guided bombs and R-73E high off boresight dogfighting missiles.