Meet the 'New' B-52 Bomber: How This Old Plane Can Drop Even More Bombs 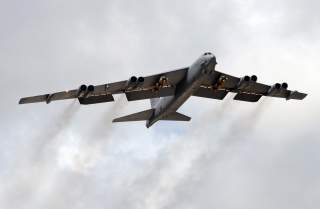 The Air Force is giving its historic B-52 bomber a massive weapons enhancement by engineering an upgrade to the aircraft’s internal weapons bay which promises to substantially enhance its attack mission options.

The 1760 Internal Weapons Bay Upgrade, or IWBU, will allow the B-52 to internally carry up to eight of the newest “J-Series” bombs in addition to carrying six on pylons under each wing. This initiative not only increases the weapons delivery capacity for the bomber but also enables it to accommodate a wider swath of modern weapons.

The B-52 have previously been able to carry JDAM weapons externally, but with the IWBU the aircraft will be able to internally house some of the most cutting-edge precision-guided Joint Direct Attack Munitions and Joint Air-to-Surface Standoff Missiles, among others.

Air Force weapons developers have told Warrior Maven that the IWBU effort will bring a 66-percent increase in carriage capability for the B-52.

Service developers also explain that having an increased internal weapons bay capability affords an opportunity to increase fuel-efficiency by removing bombs from beneath the wings and reducing drag.

The move is a key modernization step for the Air Force which, for many known reasons, no longer views the B-52 in its historic role as a "carpet bombing" aircraft. The demands and challenges of modern warfare, both counterinsurgency as well as possible force of force large scale mechanized warfare, now require precision. This weapons upgrade will help expedite the integration of an even larger arsenal of precision-guided or (smart) weapons, as Grabowski explained.

While the B-52 can of course still blanket an area with bombs, should it need to do so, more likely challenges in a modern threat environment would doubtless use long-range sensors, guided weapons or even lasers to achieve both greater standoff and precision in possible engagements.

Also, given that the size and "not-so-stealthy" configuration of the B-52, it is primarily intended to operate in areas where the US Air Force already has air supremacy. Longer range, more precise Russian-built air defenses would also be expected to pose a significant threat to even high-altitude bombing missions.

Given the fast pace of advances in command and control technology, manned-unmanned teaming, an artificial intelligence, it is entirely feasible that manned bombers such as the B-52 will soon be able to control nearby drones from the air.

The first increment of IWBU integrates an internal weapons bay ability to fire a laser-guided JDAM. A second increment, to finish by 2022, will integrate more modern or cutting-edge weapons such as the Joint Air-to-Surface Standoff Missile, or JASSM, JASSM Extended Range (ER) and a technology called Miniature Air Launched Decoy, or MALD. A MALD-J “jammer” variant, which will also be integrated into the B-52, can be used to jam enemy radar technologies as well.

The technical structure and durability of the B-52 airframes in the Air Force fleet are described as extremely robust and able to keep flying well into the 2040s and beyond – so the service is taking steps to ensure the platform stays viable by receiving the most current and effective avionics, weapons and technologies, Air Force weapons developers told Warrior Maven over the course of multiple interviews with program managers in recent years.