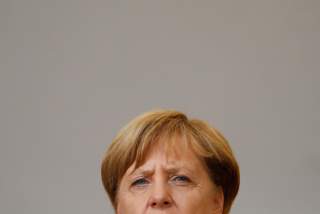 Angela Merkel is likely cruising to an easy re-election as Germany’s chancellor. Because many pundits in America refer to her as the “leader of the free world,” it is tempting to speculate that her electoral success is due to keen wisdom and firm leadership. In reality, quite the opposite is the case. In many ways, Angela Merkel is Germany’s Bill Clinton, minus the philandering.

One of the reasons that Republicans so despised Clinton was that he didn’t appear to stand for anything other than his own desire for power. Republicans routinely charged that he governed based upon whatever the polls suggested he should do. Furthermore, he was politically savvy enough to steal popular ideas from the Republicans and claim them as his own. When the “Contract with America” helped Republicans take control of Congress in 1994, a rebuked president responded by coopting many of their policies—most notably, spending cuts, a balanced budget and welfare reform. Clinton brags about these accomplishments to this day, much to the chagrin of conservatives.

Unlike Clinton, Merkel is not intensely disliked by anybody. But she does steal other parties’ ideas and claim them as her own. As Foreign Policy recently wrote, her party’s manifesto was criticized because it “contained nothing new . . . and sounded suspiciously like the manifesto of the conservative’s rival party, the Social Democratic Party.” Occasionally, she flip-flops, further giving the impression that she governs by reading the polls.

Consider the refugee crisis. In part to look beneficent, in part to make up for past sins, and in part to relieve the looming economic burden as Germany’s working age population shrinks, Merkel welcomed roughly one million immigrants with open arms. But after possibly two thousand men, many of whom were refugees, committed sexual assaults against German women, Merkel’s welcoming tune changed. Now, she wants a ban on burqas.

On gay marriage, Merkel’s personal opinion is purposefully vague. Her conservative party is largely opposed, but she knew Germans were in favor of it, as were her political rivals. She allowed the bill to be voted on by parliament, where she knew it would pass without her support. Then, she voted against it to pacify conservative voters. It was politically brilliant, but also opportunistic and duplicitous.

Unfortunately, other popular policies she encourages are not in Germany’s long-term interest. Because of their collective memory of hyperinflation under the Weimar Republic, Germans are economically stingy. As the Economist explains, they like to export goods to other countries while simultaneously suppressing the wages of blue-collar workers who make those goods. With less money to buy imports, Germany racks up a sizable trade surplus, which slows the global economy.

Worse, Germany has been thoroughly intransigent on the Greek debt crisis. It is painfully obvious that Athens cannot repay its creditors, and Berlin’s refusal on partial debt forgiveness has prolonged both Greece’s suffering and the Euro crisis. Without serious EU-wide fiscal reforms, the Euro crisis will not go away. Eventually, it will hurt Germany. Merkel, however, seems all too happy to continue muddling through without any serious decisionmaking. This has led young Germans to coin a new word in honor of the chancellor: merkeln. The word means “to dither” or “to have no opinion.”

Merkel does not fare any better on issues of science and technology, despite her doctoral degree in physical chemistry. Germans like renewable energy and fear nuclear power, so Merkel gave them what they wanted. She announced that Germany would phase out its nuclear power plants. (Apparently, she didn’t think too far in advance about how Germany would satisfy its energy needs: Germany has had to burn more coal.) Similarly, because the German public rejects the scientific consensus on the safety and efficacy of genetically engineered crops, Merkel’s cabinet has proposed banning the cultivation of genetically modified organisms, also known as GMOs.

Like Clinton, Merkel is a people-pleaser who, in her core, doesn’t believe in anything. She gives the public what it wants, which is why people-pleasers win in democracies but rarely make good leaders. Whether a policy is sensible or sustainable is of secondary importance. When the going gets tough, hopefully somebody else will make the hard decisions.

Merkel’s success, therefore, is not because of her policymaking or natural leadership abilities. Instead, it is best explained by other factors: a good economy, the German cultural preference for caution, and lackluster political competition. The Financial Times notes that Martin Schulz, her main rival, is so desperate to win votes that he is trying to stir up anti-American sentiment—a strategy that worked for Gerhard Schröder.

On the contrary, Merkel is perceived as a calm, collected and competent mother-figure, earning her the nickname Mutti (Mommy). The fact that she hasn’t screwed up terribly on any particular policy is enough to keep her in power. Germany could do a lot better than Angela Merkel, but when times are good, mediocrity will do just fine.