Merkel and Trudeau on Terror and Multiculturalism 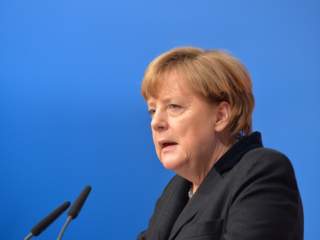 Multiculturalism: for or against? The rise of ISIS in Syria, the deadly impact of 'lone wolf' attacks, the return of foreign fighters and mass refugee outflows from the Middle East have added a new edge to an old argument in the West.

As Syrian refugees seek refuge, and with large numbers of individuals leaving Western nations to fight in the Middle East, political leaders are debating how multiculturalism and social integration figure in the anti-terror strategies of the 'liberal' West.

Consider these drastically different views from two Western leaders on the subject this month.

The first, from German Chancellor Angela Merkel, the de facto champion of the European project, was made at a Christian Democratic Union rally last week:

"Whoever seeks refuge with us, our laws and traditions must be respected and they must learn German. . . Multiculturalism leads to parallel societies and multiculturalism thus remains a living lie."

This is not the first time Chancellor Merkel has lamented multiculturalism. Regardless, the contrast with the position articulated by the newly elected Canadian Prime Minister Justin Trudeau, is stark:

"Countries with a strong national identity—linguistic, religious or cultural—are finding it a challenge to effectively integrate people from different backgrounds. In France, there is still a typical citizen and an atypical citizen. Canada doesn't have that dynamic. . . There is no core identity, no mainstream in Canada. There are shared values—openness, respect, compassion, willingness to work hard, to be there for each other, to search for equality and justice. Those qualities are what make us the first postnational state."

As a sympathetic half-Canadian, I see value in what Trudeau says here. Canadian multiculturalism has evolved in tandem with the country's federal decentralization (in same cases devolution), and this has in many ways kept the country together. It's not a coincidence that multiculturalism was adopted as an official federal policy in Canada during the 1970s and 1980s, a time when Quebec separatism was gaining momentum. I embrace multiculturalism and it's something I'm proud of being a part of, in both Canada and Australia. There is something inherently liberal about it. I have also always believed that multiculturalism, however you define it, is a generational idea and policy. There's nothing to say that you cannot evolve (immediately in some immigrant groups, perhaps after a generation or two in others) to hold multiple identities at once. One can have both a connection to cultural, linguistic or religious heritage and tradition, while also believing in a set of 'national' values and commonalities, such as language.

But that's what makes an article in The Guardian last month by Kenan Malik quite relevant. While I support multiculturalism, I also acknowledge both it, and the Merkel favored alternative of assimilation, have failed to certain degrees. Malik uses the examples of UK multicultural policy and French efforts at assimilation. He says Britain's policy failed because it put "people into ethnic and cultural boxes" and then acted as if each of those boxes had a singular view of culture and faith. Ironically, French assimilationist policies largely ended up at the same place. French authorities, while rejecting the multicultural approach of Britain, still "treated North African migrants and their descendants in a very 'multicultural way'—as a single community, and primarily as a 'Muslim' community." Both policies failed to recognize diversity: within multicultural groups in Britain's case, and within society as whole in France.

"An ideal policy would marry the beneficial aspects of the two approaches—celebrating diversity while treating everyone as citizens, rather than as simply belonging to particular communities. In practice, though, Britain and France have both institutionalised the more damaging features – Britain placing minorities into ethnic and cultural boxes, France attempting to create a common identity by treating those of North African origin as the Other. The consequence has been that in both Britain and France societies have become more fractured and tribal. And in both nations a space has been opened up for Islamism to grow."

But perhaps this is what Trudeau is getting at. By saying that there is “no mainstream in Canada”—a slightly radical thing to say for an elected head of government—he is recognizing diversity within society as a whole as well as within cultural groupings. But he is also making that diversity a strength and shifting the debate away from multiculturalism altogether. By placing the emphasis on shared (liberal) values, maybe he has found the beginnings of that "ideal policy" that Malik talks about.

Our political leaders could take a page out of Trudeau's book when thinking about social integration and multiculturalism. Maybe shared values can fill the space previous multicultural policies left behind.

Brendan Thomas-Noone is a Research Associate in the International Security Program and the Digital Editorial Assistant at the Lowy Institute, where his work focuses on nuclear security, Indo-Pacific strategic relations and Australian foreign policy. This article originally appeared in the Interpreter.