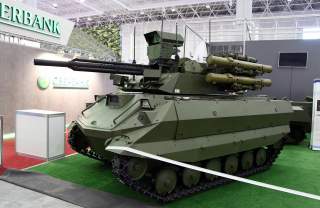 If Moscow secures a deal with the Gulf Arab state, Russia could use the money to finance the development of an export version of the machine. In the near term however, the prospect of a deal is fairly remote because the Uran-9 has not entered service with the Russian military.

"A number of foreign customers, including representatives of the United Arab Emirates, are showing interest in Uran-9 modern robotic systems,” Dmitry Shugayev, the head of Russia’s Federal Service for Military and Technical Cooperation, told the Moscow-based TASS news agency.

“However, the Russian side has not yet received any official delivery request."

It would be a significant development if the Russians did manage to secure a deal with the UAE.

“What could be useful is if the UAE in fact were to help finance an export variant of this UGV [unmanned ground vehicle]—but it has not yet used in any military engagement,” Samuel Bendett, a researcher at the Center for Naval Analyses who specializes in Russian unmanned systems.

“This supposed interest is more political than practical, as the UAE continues its policy of diversifying weapons procurement—it already uses Russian military equipment in its armed forces.”

The Uran-9 is one of three large UGVs that the Russians are developing—but none are ready for operational use.

“The Uran-9 is one of potentially three heavy UGVs under development by the Russian military- along with ‘Vihr’ that was exhibited at Army-2017 and the recently announced 20-tonne vehicle by the Kalashnikov Company,” Bendett said.

“The UAE's interest in this vehicle is probably limited to reviewing a concept design that will be used in the near future, but not immediately.”

For Russia, displaying vehicles at tradeshows such as Army-2017 is part of its overall sales strategy.

“Russia is wisely using Uran-9 and other UGVs on display this week at Army-2017 as a showcase of potential military technology—but, as the article says,  ‘no official delivery requests were received yet,’” Bendett said.

“Statements like that are common at military expos—showing interest is not the same as launching official procurement negotiations. What probably has to happen to facilitate such sales is for Russia to use its military robotics in combat.”

Syria is one conflict where Russian UGVs could see combat.

“In Syria, a number of Russian UAV models are getting a close look from potential customers given their performance in recent campaign against ISIS,” Bendett said.

“There were rumors that the Uran-9 was used in Syria and some military blogs even commented on it. It turned out, however, that observers mistook an old Soviet T-55/62 design for this robot.”