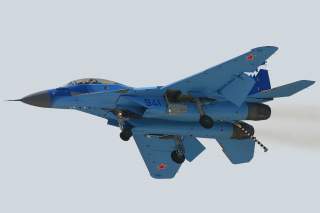 A Russian Navy MiG-29KUBR Fulcrum-D crashed on approach to the aircraft carrier Admiral Kuznetsov earlier today due to technical problems. The twin-engine fighter was conducting a training sortie, according to the Russian defense ministry.

“An accident occurred during a training flight with a MiG-29K carrier-based fighter a few kilometers away while on approach to the aircraft carrier Admiral Kuznetsov as the result of a technical fault,” reads a Russian defense ministry statement released to the Moscow-based TASS news agency.

According to the Russian defense ministry statement, the pilot survived the incident. “The pilot ejected and search and rescue has brought the pilot on board Admiral Kuznetsov,” the Russian government press release states, according to TASS. “Nothing threatens the health of the pilot and he is ready to perform his duties.”

Kuznetsov only had four MiG-29KRs aircraft onboard to begin with, but the type is expected to eventually form the backbone of Russian naval aviation. With the loss of one MiG-29KUBR, the carrier’s air wing is down to three jets and possibly as few as three pilots qualified to operate the Fulcrum from the carrier.

As researcher Mikhail Barabanov, editor-in-chief of the Moscow Defense Brief, which is published by the Centre for the Analysis of Strategies and Technologies (CAST) in Russia, noted, accident are a fact of life. Speaking earlier to the National Interest, Barabanov said that Russia has been struggling with training enough MiG-29K pilots for Kuznetsov’s deployment to the Mediterranean. “The main problem for the MiG-29KR is now a lack of trained pilots for this type and not any technical problems,” Barabanov said.

While the loss of the MiG-29K will somewhat hamper Kuznetsov’s air operations, the ship also carries ten Su-33s onboard. The four MiG-29KRs are the only fighters onboard Kuznetsov that were designed to carry precision guided munitions, but the Su-33 also offers some air-to-ground capabilities.

In previous years, the Su-33s were optimized strictly for air superiority and fleet defense. However, the venerable Flanker-Ds have been fitted with Gefest bombing sights, which the Russians claim increases the accuracy of gravity bombs to the level of precision-guided munitions (PGM). However, Western experts note that while the Gefest might increase the accuracy of dumb bombs, it is highly unlikely it approaches that of PGMs.

The carrier was expected to start strike operations against targets in Syria last week. However, it’s not clear if the carrier is currently conducting combat operations over that war-torn nation.