Mike Pompeo: The 5 Biggest Challenges Ahead of Him as Secretary of State 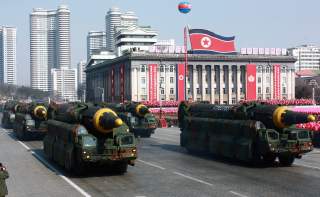 Rex Tillerson never really got into his groove. He was hated with a passion by many of his employees who felt their work wasn’t being appreciated. He had a toxic personal and professional relationship with the man who mattered, President Donald Trump. And he had few diplomatic successes to speak for; Tillerson’s most significant case of shuttle diplomacy was a four-day stay in the Persian Gulf, where he jetted to Qatar, Saudi Arabia, and Kuwait hoping to push through a Gulf reconciliation. He flew back to Washington empty handed.

For good or ill, Tillerson is out and Mike Pompeo is in. The three-term congressman from Kansas and CIA director is clearly a politically astute, intelligent and capable man. The State Department is in such squalid condition that the former West Pointer will need all of the help he can get to turn the place around.

Here are the first five action items on Pompeo’s desk:

The State Department has a long and proud history of serving the U.S. foreign policy interests with dedication and distinction. But the building is a shell of what it used to be. Senior foreign service officers are choosing retirement over new assignments, the president of the American Foreign Service Association has rung alarm bells about a staff that has been “depleted at a dizzying speed,” and anonymous employees speak of the department as if it’s a jail and they are captives of an administration with an anti-diplomacy mind-set. As difficult as it will be, Pompeo must bring the State Department back in from the cold. The building’s position needs to be reasserted into the policymaking process and re-elevated as the preeminent organization in charge with executing America’s foreign policy.

By the time Trump fired Rex Tillerson via tweet, the two men were not the best of friends. Trump saw in Tillerson an establishmentarian who was lukewarm to the America First agenda, and Tillerson saw Trump as a man who ran on impulse with a questionable command of the facts. If it weren't for the valuable assistance of Defense Secretary Jim Mattis during the inter-agency debate, Tillerson’s would have lost a lot more policy battles.

Mike Pompeo can’t afford to carry on with that same frostiness towards the commander-in-chief. Given Trump’s obsessive focus on loyalty, it’s not a stretch to assume that the president’s favorability of the State Department depends on his favorability of the individual running it. If Pompeo is able to maintain his positive personal rapport with the president, the likelihood Foggy Bottom’s recommendations will be seriously considered increases.

3. Don't Be Afraid to Disagree with the President

Pompeo is reportedly one of Trump’s favorite cabinet officers. The two speak to one another multiple times a week, and Pompeo briefed the president personally on the intelligence during his CIA directorship. Loyalty is one of the very reasons Pompeo was likely nominated to be America’s top diplomat in the first place.

It would be a massive error in judgment, however, if Pompeo were to prize loyalty over sound foreign policy advice. He could get away with skirting the tough policy questions of the day when he was the CIA director, but he won’t be able to do so in his new role. His past position was all about delivering the hard facts to the president and his advisers as best as America’s intelligence community saw them. CIA directors analyze and report. What they don’t do is recommend policy. Not so when you’re a Secretary of State. Pompeo will be expected to counsel Trump on what he believes is the most effective policy for America’s interests. And he will be expected to do so even when his advice may be contrary to Trump’s instincts.

4. Bring The "Deep State" Careerists Back into the Fold

One of the frequent complaints of Tillerson’s tenure was that he separated himself from the State Department staff and was barricaded in the executive suite on the seventh floor. The rank-and-file were upset that they couldn’t get access to the secretary when they needed too, and that when access was granted, it was too late. Instead of utilizing the career staff in the building to the fullest, Tillerson would often delegate to Policy Planning chief Brian Hook; one Foreign Service Officer with twenty-five years of experience commented to the New York Times Magazine that Hook was overworked “trying to do the job of 30 people.”

Tillerson’s replacement will need to hire a demolition team to break the walls keeping the inner sanctum around the secretary and the careerists in the department apart. These are the people, after all, who possess an encyclopedic knowledge of the country or region they cover, know how the building works, can tell you which foreign leader is a pushover at the negotiating table, and which foreign minister fulfills his or her promises. As Shamila N. Chaudhary, a former State Department senior official during Hillary Clinton’s tenure, wrote in Politico, “the State Department is not resistant to change but rather . . . opposes being excluded from conversations about its own future.” Everybody in Foggy Bottom ought to be part of the team.

5. Prepare Trump for His Summit with Kim Jong-Un

While we don’t yet know whether a meeting between Trump and North Korean dictator Kim Jong-un will actually happen—or if it happens, when—Secretary Pompeo’s first order of diplomatic business will be to brief his boss on what to anticipate, what to say and what to withhold. Due to his experience briefing Trump countless times in the past, Pompeo already has the skills and patience to perform the task successfully.

On the upcoming summit with Kim, however, Pompeo has one more goal: manage Trump’s expectations about what he can achieve while drilling a message of skepticism in the president’s head. Preventing Trump from leaving the meeting disappointed or angry due to a lack of groundbreaking results is as valuable as preparing briefing materials on North Korea’s negotiating style and rehearsing an unambiguous set of talking points.