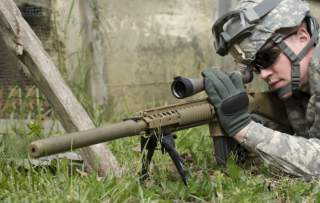 An angry man with a grudge and a rifle takes an open position on the third floor of a parking garage and shoots close to a dozen policemen pulling duty at a peaceful demonstration. The police and the media call him a sniper. But combat tested military snipers say "HELL NO, Micah Johnson is NOT a sniper."

A deranged former Army private takes an open position on the third floor of a parking garage in Dallas and shoots several policemen in an ambush.

In the whirlwind of media coverage and police press conferences after each event, the attackers were described in one-word clichés:  a driver, a shooter and… a sniper?

Not so fast, says the military sniper community, which voiced its collective disgust at the decision by Dallas police and the media to describe former PFC Micah Johnson, the Dallas killer, as a sniper. The media latched on to Johnson’s short stint in the military as proof that he was a well-trained killer.

“What [Johnson] did, there was no skill involved, every soldier can do that,” said Mark Yardley, a retired Special Forces sniper and medic, who during the first years following 9/11 ran the U.S. Army’s Special Operations Command firing range at Fort Bragg, N.C. “The press loves to call anybody who takes a shot that they don’t know where it came from a sniper.”

Calling killers like Johnson a sniper, one veteran Army sniper said, “really does a disservice to the guys in the military who are snipers,” because of what it takes to achieve the skills to perform one of the most dangerous jobs on the battlefield, one that requires a highly disciplined individual.

“To call this [Dallas] murderer a sniper puts our job in a bad light, “said Pete Peterson (at his request, his name is slightly modified to protect his security), who made several deployments to Iraq, trained other soldiers at the U.S. Army Sniper School and now leads tactical training for a private company. “We don't murder people. We don't shoot cops in the back. We do our job as soldiers, Marines and sailors.”

Sniping, Peterson said, requires some distance, pointing out that Johnson “shot those guys from 100 meters or closer. “He’s not even a sharpshooter. He would be looked as an armed irregular, with no formal training in long range marksmanship, his fires aren't accurate in targeting specific individuals.”

“But” Peterson acknowledged, “his knowledge of the area was good and he used it to his advantage.”

Johnson joined the Army Reserve in March 2009 after high school in the Dallas suburb of Mesquite, was trained as a carpentry and masonry specialist and assigned to the 420th Engineer Brigade based in Seagoville, south of Mesquite, the AP reported. He deployed to Afghanistan in November 2013, was accused of sexual harassment the following May and sent home, the AP report said.

Once he was home, according to published reports, Johnson enrolled in a self-defense school in Richardson, Texas in 2014 where he learned shoot-and-move techniques and other tactical maneuvers. And police investigators said he practiced with firearms and explosives in his yard. But so did the notorious so-called DC sniper, John Allen Muhammad, who randomly gunned down people in the Washington DC area over a three-week period in 2002, working with a young apprentice out of the back of a Chevy Caprice with a hole in the trunk. Muhammad is referred to interchangeably as the DC Sniper and a spree killer.

Military and law enforcement snipers generally maintain stable lifestyles and undergo regular psychological evaluations. Their specialties, in addition to shooting, include reconnaissance and intelligence gathering using the same stealthy hiding and moving techniques they are trained to do as snipers. It’s a job that requires a highly disciplined and skilled team or individual. They’re trained to read environmental effects to adjust their ballistics for long-range shots and keep a low profile.

Johnson told police negotiators during a resulting standoff that he wanted “to kill white people, especially white cops,” according to the Dallas police chief.

“Who knows what was in his head?,” said Stan Crowder, president of the U.S. Army Sniper Association, who logged several deployments in Iraq and Afghanistan and a round of assignments at the U.S. Army Sniper School. Crowder maintains that Johnson, whose experience on the range, he speculated, was probably that of every basic trainee in the Army, is no sniper. The events in Dallas at the hands a trained sniper, he said, would have born the signs of a professional.

“If a real military sniper was to flip and do something as horrible as this, he would have probably done it the same way he did it on deployment,” Crowder said. “No one would have seen him or gotten a fix on him. A bunch of people would be shot and no one would know who did it. He wouldn’t have left anything behind, they never would have found him. He probably wouldn’t even have cast a shadow.”

So how would he describe Johnson, whose activities could be described accurately as “sniping?”

“I guess I’d call him a reject. After training in the Army, he gets out and flips out and turns it on the people he’s sworn to protect.” Crowder said. Calling him a sniper, he said, “is a kick in the teeth.”

For Richard Caruso, a retired Special Forces medic and sniper with dozens of deployments to Iraq and Afghanistan over 12 years, the only word for Johnson is “murderer.”

“Just on a technical level,” Caruso said,” he really didn't have the skills real snipers have. Those shots weren't long range. He was just a guy with a gun and hatred. I had many opportunities to shoot many more people than I did. The reason I let them live is because I did kill but I didn't murder. Big difference.”

Referring to killers like Johnson as “snipers,” Peterson said, does damage to guys in the service today who are training for that battlefield job.

“When you call a nationally known murder a sniper, that idea bleeds over into what snipers are to those who don't know,” he said, adding that with the elimination of programs like the Sniper Employment Leaders Course, where officers learn the capabilities of trained snipers and how to use them in combat, now those officers hear the word sniper and related it to what they remember, “bad movies and now this murder,” Peterson said.