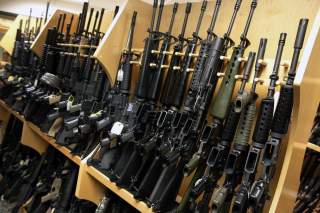 Millennials aren’t more liberal on gun control than their parents or grandparents, according to recent polls. To the contrary, there’s some evidence that gun control is supported less by people 30 and younger now than previous generations.

Gallup has been surveying adults under 30 for the past three years, and on average, they were just 1 percentage point more likely to support gun restrictions than the national average of 57 percent.

“Young people statistically aren’t that much different than anybody else,” Gallup Editor-in-Chief Frank Newport told NPR.

With millennials being more liberal on same-sex marriage and marijuana legalization, some might assume they would also be more liberal on gun control, but that was not the case. “Sometimes, people surprise us, and this is one of those instances that we don’t know why,” Newport said.

A separate Pew Research Center poll found differences between millennials and the generations before them on two gun control proposals, outlawing “assault-style” weapons and banning magazines that hold more than 10 rounds. Both Republican and Democratic millennials are more conservative on these proposals and less likely to favor them than Generation Xers, baby boomers, and even members of the so-called “silent generation,” those born between the mid-1920s and mid-1940s.

Gallup also found that 66 percent of 18-to-29-year-olds said they think that concealed carry guns would make the U.S. safer, 10 percentage points higher than the national average of 56 percent.

Millennials are less likely to own guns than other generations, but they’re much more likely to listen to pro-Second Amendment podcasts, Kim Parker, director of social trends research at the Pew Research Center, told NBC News.

She added: “Older people are saying they want guns for protection, but 18-to-29-year-olds are saying they’re more into going shooting at a gun range.”

Kyle Perisic is a member of the Young Leaders Program at The Heritage Foundation.