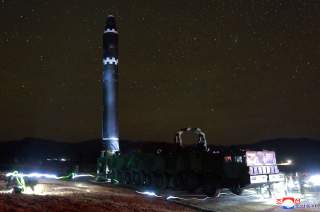 The Democratic People’s Republic Korea should be a nothingburger in the twenty-first century. It’s at the bottom tier of pretty much every human development, economic, corruption and freedom index in circulation. Transparency International ranks North Korea 174 out of 176 on its corruption perceptions index, outdone by only South Sudan and Somalia. It’s freedom ranking is abysmal and would make Josef Stalin blush: out of a scale of 0 (least free) to 100, Pyongyang comes in at a 3. Kim Jong-un’s national economy is a paltry $28.5 billion, smaller than the U.S. state of Vermont.

What North Korea used to export to China, Africa and Southeast Asia with ease are now technically violations of international law. This August, the UN Security Council passed a resolution that cut Pyongyang’s $3 billion in export earnings by roughly a third. Importing North Korean seafood is now an illegal act.

The only reason the United States or the UN Security Council pay even remote attention to North Korea and its portly dictator is because the isolated and poverty-stricken “Hermit Kingdom” is constantly improving upon its ballistic missile and nuclear weapons programs. If Pyongyang couldn’t physically hold its southern neighbor hostage with the threat of destroying Seoul, one of the world’s most congested cities, North Korea would be a third- or fourth-tier priority.

The country’s frenetic missile testing schedule, and a looming fear among South Korean intelligence officials that another nuclear test is around the corner, provide the Kim regime with a few aces in its deck of cards. It is the North’s considerable conventional power along the Demilitarized Zone and its weapons of mass destruction that prevent a more powerful nation like the United States, South Korea or Japan from ending the Kim family’s reign for good.

If there ever arrived a point in time when President Donald Trump believed that authorizing a preemptive military strike was the best option to combat the threat North Korea’s nuclear and missile capability posed to the United States, it’s not difficult to predict ahead of time how Kim would retaliate. The biggest bang for Kim’s buck has always entailed lunging for South Korea’s economic and political jugular, and enveloping the South Korean capital with rings of cannon and artillery fire. Seoul, a metropolitan area of at least 10 million people, would be the prime target of opportunity for Pyongyang.

American and South Korean soldiers staring down North Korean troops at the 38th Parallel understand this quite well, as do the military strategists and planners in Washington whose job centers on mapping out every conceivable scenario during the beginning of a conflict. Indeed, the U.S. Army constructed an $11 billion base from scratch 40 miles south of Seoul for the very reason of getting U.S. troops out of North Korea’s line of fire.

Seoul is only 30 miles from North Korean artillery. An attack on the city with conventional munitions coming from Pyongyang would put the safety of everyone in the area at grave risk. With nearly half of South Korea’s population living within 50 miles of the DMZ, and with perhaps as many as 8,000 cannons and rocket launchers ready to fire on Kim’s orders, it’s not beyond the imagination to picture fatalities after a North Korean reprisal attack in the tens of thousands.

As a former senior U.S. Army adviser on the Korean Peninsula penned in Foreign Policy this September, “Even a small number of missiles fired into the city, targeting South Korea’s defense complex, will have a significant impact, as each warhead weighs between 500 and 1000 lbs. To put that in context, each would be enough to annihilate anything in one to two city blocks.”

This damage, however, would be an exponentially higher if Kim decided to deploy one of his nuclear devices in a last gambit to prevent a humiliating military defeat.

Due to Seoul’s population density, a single 250 kiloton nuclear strike on city hall would kill over 717,000 people—tens thousands of whom would likely be American civilians who live and work in the city. The outer perimeter of the radioactive fallout would extend over a four mile radius. Those who are about two and a half miles from the nuclear detonation would be either dead (within 1.1 miles from the impact zone), dying over the next few weeks (1.3–2.72 miles) or suffering internally from the pain of acute radiation poisoning (2.72–4.28 miles). Seoul, the city that powered South Korea’s “Asian Miracle” in the 1980s, would cease to be one of the economic engines of productivity and prosperity in Asia.

Would Kim Jong-un go all in and demolish Seoul in order to retaliate against an American attack? We won’t now until this bone chilling scenario converts from the hypothetical to the real. It’s a reality that none of us, not even Kim Jong-un, hope will happen in our lifetime.