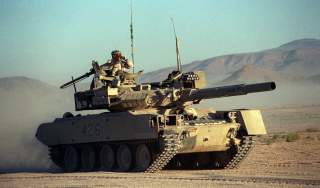 Expected for release this later this month, a draft request for proposals will take US Army plans to add “Mobile Protected Firepower” to its Infantry Brigade Combat Teams (IBCT) a step closer to realization. The vehicle selected to fulfill the service’s emerging requirement will also determine if a long dormant capability is revived; battlefield delivery of light tank-type vehicles by airdrop. The 1996 retirement of the 82nd Airborne Division’s M-551 Sheridan armored reconnaissance vehicles, and cancellation of the M-8 Armored Gun System, the Sheridan’s intended replacement, left the Army’s airborne formations with a direct fire capability gap the service intends to restore with a new combat vehicle.

“We expect to issue a draft RFP sometime in June with a final following in December, for the vehicle selected, airdrop capability is an objective, not definitive, requirement,”  according to Colonel William T. Nuckols, director of the Mounted Requirements Division at the US Army Maneuver Center of Excellence at Fort Benning, Georgia. Nuckols spoke with the National Interest on May 17, confirming imminent release of the draft RFP by email on June 12. Nickols’ group is central to ensuring the selected vehicle fulfills the requirement to provide infantry with the capability to engage line of site targets with a large caliber gun, from a mobile, protected platform.

Initially, MPF requirements were drawn up to re-equip Army airborne formations with an air-droppable light tank. Plans changed as the service saw need to provide its regular IBCTs with a fire support vehicle offering mobility and survivability not available from comparable in-service assets such as the M-2 Bradley. Envisioned organizational structure calls for each Army’s IBCT to receive an MPF company, approximately 14 vehicles. “We are planning for a vehicle to primarily support our IBCT in standard configuration, rather than one that would be configured only for airborne,” Nuckols said.

MPF fits into the Army’s newish Joint-Entry Operations Concept, one calling on airborne troops to prevent enemy forces from employing area-denial tactics. Until a vehicle candidate is selected, it will remain unclear if paratroop formations will have to seize contested airfields, prior to MPF arrival by conventional landing. Based on the M-551, the weight limit for airborne armored vehicles is approximately 18 tons. For the MPF program, Nuckols said there is no specified weight ceiling, “but we do require that two MPF be transported by a single C-17.”

Nuckols said the service is “not looking for a replacement for the M-551 Sheridan or M-8 Armored Gun System, we intend to field an infantry support vehicle, an asset that can defeat most battlefield targets, it’s not intended to fight enemy tanks, whatever vehicle is chosen will have that capability.” He said requirements would likely force vehicle weights beyond 18 tons, rendering the airdrop requirement a ‘nice to have’.

Lt. Colonel Scott Coulson (retired), formerly with the US Army Capability Integration Center at Fort Eustis was heavily involved in the MPF initiative, working as an advocate to ensure overall program support. “The MPF Industry Day last August was the start of the program, while it was not then a budget line item, as is now the case, during Industry Day high-level details on MPF lethality, mobility, protection, and sustainability were discussed with contractor representatives,” Coulson spoke with National Interest on May 16. Due to the high costs of non-government funded prototype and concept development activities, Nuckols anticipates between three to five industry teams will submit proposals after the release of the final RFP release, anticipated in December.

Regarding firepower, Nuckols said the Army is leaning towards a 105mm gun armament, enabling the MPF to engage main battle tanks as a secondary mission. An autoloader, reducing crew size is favored. The new AMP round, now in the development and qualification phase, will replace legacy 120mm tank ammunition including the M830 High Explosive Anti-Tank (HEAT), M830A1 Multi-Purpose Antitank (MPAT), M1028 canister, and M908 Obstacle Reduction round. “Should the Army go with a 105mm for MPF, I would anticipate a similar multi-purpose round along the lines of AMP may be developed,” Coulson remarked.

Army infantry brigades may not be the only US military formations in line to receive the MPF, Nuckols said the Marine Corps is monitoring developments. Coincidently, the MPF is slated to begin fielding at about the same time USMC M1A2 main battle tanks are passing the 25-year mark. “I think the vehicle is going to be of high interest to the Marines, they have a similar need for an expeditionary fire support vehicle for infantry, additionally, the MPF is intended to operate without resupply during the initial hours of an operation.”

Estimates state up to 500 vehicles could be procured for Army and National Guard infantry brigades, equipping Marine tank battalions could raise the number in excess of 600. In the meanwhile, the 82nd Airborne is evaluating several USMC LAV-25 light armored vehicles for suitability in airborne operations, if successful up to 50 may be acquired from USMC stocks.

Josh Cohen is a defense research analyst and author. Josh was previously contributing editor at 'Naval Forces' magazine, Managing Editor of the USNI Military Database and Associate Editor with 'Inside the Navy'‎ Josh served in the US Marine Corps' 2nd Tank Battalion.