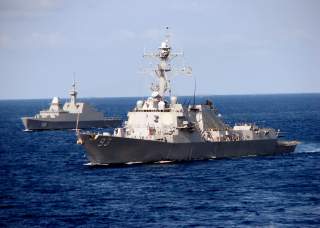 Russia, China and Iran pose major challenges for U.S. missile defense. But for the new Trump administration, the most immediate problem is North Korea.

Pyongyang’s most likely U.S. target is Hawaii, which means that this is no time for business as usual.

The ballistic missile threat from the Hermit Kingdom continues to grow. Kim Jong-un conducted a medium range ballistic-missile test within weeks of Trump’s swearing-in ceremony. The regime claims the test was successful.

Whether it was or not, the test serves as a sobering reminder that recent U.S. missile-defense policies and spending have not done enough to deter our adversaries from pursuing advanced weapons. In fact, the first real test of the Trump administration might just come from Pyongyang. Their ability to hit the West Coast of North America remains questionable, but there is little doubt that the North Koreans already have the capability to reach Hawaii.

As President Trump prepares his defense-budget priorities, our leaders have an obligation to reexamine the policies, doctrine and rules of missile defense as practiced by the Obama administration. It is a chance to correct course and ensure that the United States develops a comprehensive, robust missile defense—one that can deal with today’s threats and is prepared for tomorrow’s.

Nowhere are those threats to homeland security more imminent—or geographically closer—than in Hawaii. It is home to eleven military bases. It holds invaluable strategic assets and serves as our bridge to the greater Asia-Pacific theater. And it is one of our nation’s most vulnerable targets.

Defending Hawaii must be a priority for the administration and Congress. There are two major courses of action that can be followed. The first is the current plan for the Missile Defense Agency to request millions to develop a new medium-range discrimination radar system, known as Homeland Discrimination Radar Hawaii (HDR-HI). There is no denying that, in the long run, this will improve our defenses—for the mainland as well as Hawaii.

But Hawaii is in imminent danger, and this plan alone would not materially improve Hawaii’s defenses for years to come. That is simply not fast enough. It puts tomorrow’s “science” ahead of today’s practical defense.

Given the growing and very real ballistic-missile threats from North Korea, decisionmakers in the White House, the Capitol and the Pentagon should move to swiftly strengthen Hawaii’s defenses with existing technology. A modest investment in a combination of current capabilities could protect Hawaii from the North Korean (and other) threats, quickly.

For a relatively modest $41 million, the Aegis Ashore test facility in Hawaii could become a permanent installation. Even with the costs of procuring additional SM-3 interceptors (estimated at a few million dollars per missile), Hawaii could be protected quickly and cost-effectively with this proven existing capability. This installation proved the technology now being operationally used in Romania. Make it permanent now.

Then there is the Terminal High Altitude Area Defense (THAAD) combined with the Army Navy/Transportable Radar Surveillance (AN/TPY-2). THAAD is a unique missile-defense system with unmatched precision and mobility. We are already deploying THAAD to South Korea to defend our allies. Another THAAD deployed to Hawaii would further deter North Korea from any attempt at attacking the U.S. homeland.

When it comes to defending Hawaii from the growing North Korean threat, our existing Aegis Ashore and THAAD + AN/TPY-2 capabilities offer (1) greater certainty, as they’re battle-tested systems; (2) greater value, as they’re less expensive to procure and can plug in without additional development costs; and (3) greater security realized for Hawaii in the near term.

President Trump seems to understand the threat and the need to deter it. You cannot deter today with a capability that is still many years away. Nor have unwritten, unofficial policies (i.e., the last administration’s plans), the view that we should put Americans at risk to avoid “triggering” our adversaries, and skewed budget priorities that short-change defense done anything to mitigate the threat. Persisting along that path is irrational, especially when we have cost-conscious radar and interceptor technology available.

Ariel Cohen, director of the Center for Energy, Natural Resources, and Geopolitics at the Institute for the Analysis of Global Security, observes, “Our intelligence has been surprised again and again by technology developments by adversaries or attacks the U.S. didn't foresee.” This is certainly true regarding North Korea, and it means we can’t risk depending on technology that is still far off. We need to deploy what we have, what we know works, and what will provide security before North Korea shows us again that they have a capability we did not foresee.

More than a million Americans are in North Korea’s crosshairs with no real defense. As Kim Jong-un’s most likely target, they must be protected now. The good news is that we can do it simply by using existing Aegis Ashore, combined with THAAD and AN/TPY-2.