Moscow's Moves in Syria: 5 Messages Russia Is Sending to the World 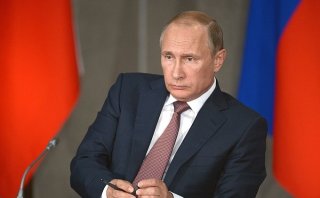 As Russian ships and planes continue to deposit additional personnel and equipment in Syria, here are five geopolitical messages Russian president Vladimir Putin is sending to the world:

One: Reports of Russia’s demise have been greatly exaggerated. In other words, the narrative that Western sanctions plus falling oil prices combined with China’s economic slowdown have brought the Kremlin to the edge of collapse is quite premature. Russia has only a fraction of U.S. global power projection capabilities but in its ability to send forces to Syria it still ranks among a select few countries—with more European countries prepared to fall off that list—who can send and sustain military forces beyond their immediate borders. The Kremlin is clearly signaling that it plans to take an active role in setting the agenda in the Middle East—and not to passively accept an American vision for how the future should unfold.

Second: Putin is making it clear that he will not accept Washington's default position that the removal of a brutal strongman from power is a path to greater long-term stability in the Middle East. And while the United States and Europe continue to debate their next moves, particularly in the wake of the migrant crisis, Russia is prepared to act on its assessment that more direct military assistance to aid Assad in combating the Islamic State is the best way to end the conflict. Putin has repeatedly indicated that if the goal of Western policy is to reduce the flow of refugees and decrease the threat of Islamic terrorism gaining a new Afghanistan-style base of operations, then the experience of Iraq and Libya suggests that overthrowing Assad and hoping the opposition can form a more effective and stable state administration will not achieve these ends. Having reached this conclusion, Putin is uninterested in asking for the West's permission or Washington's blessing.

Third: Russia is more confident of its position in Ukraine. The uptick in violence over the summer has receded, with the cease-fire again largely appearing to be holding. At the same time, Ukraine’s ongoing domestic political and economic woes suggest that there will be no major breakthrough that will solidify the Maidan revolution and put the country on an irreversible path towards closer integration with the Euro-Atlantic world. Instead, things appear to be settling down into a protracted frozen conflict where Moscow retains most of the leverage.

Forth: The Kremlin enforces its red lines. Just as Moscow would not permit the separatists to face catastrophic defeat last summer in Ukraine, Russia has signaled that it will not sit by and allow Bashar al- Assad to be overthrown or removed by outside military action. With more Russian forces on the ground, and reportedly augmenting Assad's air defense capabilities, the risk calculus for any sort of U.S. or NATO action against Assad's government has dramatically increased. Even more limited proposals; such as enforcing a no-fly zone to create protected space on the ground for refugees now opens up the possibility for a clash with Russian forces.

And Fifth: Russia's willingness to put "boots on the ground" in Syria, in contrast to a increasingly desperate search on Washington's part for local proxies willing and able to fight both Assad and ISIS and the reluctance of key U.S. allies to take on more of the burden, serves several purposes. It reassures Russian partners that Moscow is prepared to meet its pledges even if there is a cost in terms of resources, lives, and reputation. This has not gone unnoticed in places like Egypt and Azerbaijan, where governments question the depth of the American commitment to their well-being. For Middle Eastern countries that have opposed Russian policy in Syria, Putin's decision to up the ante may lead them to reassess whether the path to a viable settlement resides not in Washington, soon to be increasingly distracted by an election campaign, but through Moscow.

Putin's decision reflects an assessment that the risk of greater Russian involvement in Syria is outweighed by the dangers to Russian interests if Assad should fall. Russia will not be persuaded by strongly worded demarches to reverse its deployment. The United States, in charting its response, needs to be guided by a similar calculation of the ends it hopes to achieve with the means it is prepared to commit.

Image: Office of the Russian President.