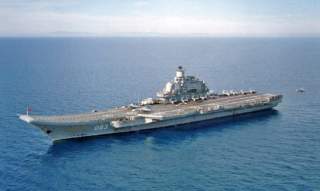 News has been rippling across Western media of a Russian naval squadron headed by the country's only aircraft carrier, Admiral Kuznetsov, slowly making its way towards Syria.  Originally announced on July 11th, the combat tour to Syria has been long in the works, together with a host of other Russian naval activities unfolding simultaneously this month.  The Russian squadron has been lurching along at a steady pace as part of a tour de force around NATO countries and towards the Eastern Mediterranean.  At the time of this writing, the ships were passing through the English Channel. While the military objectives of this mission are not entirely insignificant, Russia's chief purpose is status projection, leveraging its navy to demonstrate that it is a great power.

The squadron will first irk Russia's already apprehensive Western neighbors and then make its presence felt in the Middle East.  Yet this latest bit of political theater and military showmanship is not without risk.  Kuznetsov's fortunes will determine whether this becomes a demonstration of Russia's power projection, or an unintended embarrassment, leaving the impression that Moscow is only imitating great power status.  The carrier is notoriously unreliable, while many of its fellow ships are also Soviet inheritances—capable but aging.

Russia seeks to intimate that it is one of the few countries able to project military power to distant shores and present the image of having some parity with the United States.  Both images will play well with a domestic audience.  Behind the scenes, a two year battle over the future of the State Armament Program is also unfolding in Moscow, with military services fighting over a defense procurement budget on the ebb.  Despite being a vast Eurasian land power, Russian leaders going back to Peter the Great have a history of lavishing disproportionate attention to the navy, believing that in the international system one must be able to show prowess on the high seas to be recognized as one of the great players in the system.

Vladimir Putin has not deviated from this traditional mindset, only exemplified it.  He has at times quoted Alexander III's famous line that Russia has only two dependable allies: "its army and its navy."  A commentary on geopolitics more so than military matters, but it still holds true to this day.  Russia's navy has taken on considerable risk in a bid to convey to national leadership that it is an invaluable instrument for global status ambitions and national inspiration.

Though often a point of fixation, the Russian carrier Kuznetsov—or perhaps more accurately the originally Soviet-built 'heavy aviation cruiser'—is also accompanied by the nuclear-powered missile cruiser Peter the Great. This flagship of the Russian Navy packs an arsenal of anti-ship missiles, air defenses and combat capabilities worthy of its prominent name.  Kuznetsov's mission is in part to make a combat debut in Syria, having sailed several times to the region, but never having fought.  This is a public relations mission at heart, but also an important training event for Russia's tiny naval aviation component.

The military aspects of the operation should not be overlooked.  Russia's carrier is often disparaged as a floating lemon, and such criticisms are fair, but the West has an unhealthy track record of underestimating Russian military capabilities for the sake of disparaging them.  Unlike previous tours, which were largely for show, this time the ship will likely conduct combat operations, and it's not traveling alone either.

The Kuznetsov set sail on October 15th from Severomorsk for the Syrian coast together with Peter the Great, two Udaloy-class destroyers, a tanker ship and a large tugboat.  Little noticed is that on the same day a squadron from Russia's Pacific Fleet departed Vladivostok on the other side of the world.  The second grouping consists of two destroyers (Udaloy and Sovremenny class), together with a large tanker and tug, headed for the Indian Ocean.  It's possible that this task force may choose to rally with the Kuznetsov in the Eastern Mediterranean, or perhaps standby on call in nearby waters.

A host of other naval movements are playing out simultaneously.  One of Russia's newly completed Admiral Grigorovich-class frigates is transferring from the Baltic to the Black Sea Fleet, and may join the group off Syria to fire land attack cruise missiles.  It's possible one of the Northern Fleet's nuclear-powered submarines has joined this tour as well.  The Russian Navy's comparative strength, its submarine force, is unlikely to have been left completely without a role in this affair.

Two large corvettes from the Baltic Fleet have ventured out of port, either to escort the carrier or join it for exercises on its voyage south.  Already on October 18th, the carrier began flight-training operations in the Norwegian Sea, shadowed by the British and Norwegian militaries.  Traveling slowly, the Russian Navy will probably make several exercise stops as a pointed show of force to NATO along the way.  Although planned well in advance, the first part of this tour will undoubtedly answer some of the 'deterrence messaging' by the United States 6th Fleet and NATO ships routinely visiting the Baltic and Black Sea.

Moscow will also try to reply to the United States fairly blunt message in June, when two U.S. carriers were conducting operations in the Eastern Mediterranean in what U.S. Navy officials said was a "demonstration of capability" and "a graphic representation of what we're capable of" for those watching.  Hint, the intended audience was Russia, and Moscow never forgets to repay such favors even if it takes a bit of time.  How many ships will ultimately join the carrier's escorts in the Mediterranean remains a mystery, but the flotilla already seems quite larger than the usual group that would accompany the ship for such a mission.

So what can Russia's miniature carrier strike group do?  The carrier was always limited in its offensive capabilities, particularly once its anti-ship missile tubes were removed.  The ship is more about Russian pride than menace—though the Russian Navy has been working to restore its largely moribund naval aviation component.  Along with 10 older Su-33s, the ship will carry 4 new Mig-29KR multirole fighters and perhaps a few Ka-52K helicopters as well.  While its max capacity is 50 aircraft and helicopters, the air wing inside is likely much more modest.  The ship uses a ski-jump design, which generally limits takeoff weight for aircraft given there are no catapults.  However, these design constraints in no way mean that Russian planes will not be able to launch and conduct air strikes over Syria, or armed combat air patrols over the sea.  More problematic is that Russia has few pilots capable of carrier operations, which means this mission will stretch human capital along with military hardware.  There are likely more planes than pilots to fly them onboard Kuznetsov.

The carrier also has a troublesome history with unreliable boilers and a track record of embarrassing breakdowns.  It is an unlucky ship.  Over its service life, the ship has spent more time in repair, overhaul, or some type of refit than operational status.  In 2009, the Kuznetsov had a hellish voyage to the Mediterranean when a fire broke out due to short circuit, leading to one death onboard.  One month later, a refueling accident south of Ireland led to the ship dumping perhaps 300 tons of oil into the sea.  The tugboat Nikolai Chiker is a trusty sidekick, given its large brother has at times completely lost propulsion in stormy seas.  It also has an automatic identification system (AIS) active allowing the fleet to be readily followed on commercial maritime websites.  Unlike Russian air force flights near NATO countries, this cruise has its transponders activated for everyone to see.

The Kuznetsov may be the least reliable ship in the fleet, but it has recently completed another overhaul and Russia's Navy seems confident the carrier is up to the task.  The Pacific squadron may be the navy's backup plan in case the Kuznetsov has to turn back due to malfunction.  Given that the current tension in U.S.-Russian relations has resulted in heightened media attention, one can only hope for their sake that past performance will not repeat itself. If this adventure becomes a public fiasco, Vladimir Putin is unlikely to prove merciful.

The Russian Admiralty in St. Petersburg should be given its due, from new submarines, to cruise missile strikes in Syria, and an operational tempo not seen in decades, the Russian Navy has made notable strides.  Resurgence is perhaps the wrong word, but a steady revival is certainly taking place. That being said, the Kuznetsov may not be the best way to demonstrate it. The ship is a symbol of Soviet heritage, laden with the vestiges of former superpower status, together with the realities and frustrations that still bedevil Russia's present day military.  Russians familiar with the ship will be watching its voyage no less nervously than Western onlookers.

Michael Kofman is a Global Fellow at the Kennan Institute, Wilson Center, and an analyst at CNA Corporation. The views expressed here are his own.