Moving Past "Potential": Can America and India Become Real Partners? 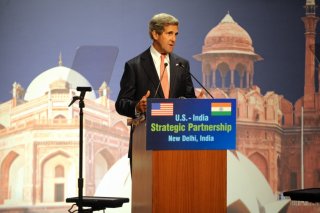 The US-India strategic partnership is either the most under-performing bilateral relationship in the world or its most overrated.

As a new chapter in this relationship is written with the ascent of a center-right government in New Delhi (whose earlier incarnation in the late-1990s had in fact proclaimed the US and India to be 'natural allies'), the aura of hyperbole that permeates ties needs to be shed. Equally, with John Kerry and Chuck Hagel having journeyed through New Delhi over the past fortnight with proposals to deepen defense cooperation, and with Prime Minister Narendra Modi due at the White House in late-September, the conceptual gap in value systems and national interests that has provoked this under-performance needs to be internalized. Another decade-and-a-half of inflated expectations and modest delivery in terms of strategic congruence would be a tragic waste. It would also detract from both countries' pursuit of a fundamental interest that aligns their purposes in the Indo-Pacific: the maintenance of a stable geopolitical equilibrium.

With the passing of the bipolar international order and India's own shift toward market economics, it was assumed that the traditional commonality of democratic values, complemented by an increasingly robust set of inter-societal ties, would accentuate a dramatic convergence of national interests between the two countries. Washington and New Delhi were to be bound by a common interest in preventing Asia from being dominated by China, eliminating threats posed by international terrorism as well as by state sponsors of terrorism, arresting the spread of weapons of mass destruction, promoting the spread of liberal democracy, deepening expansion of the international economic and trading order, and securing the global commons, especially the sea lines of communication.

Aside from a growing convergence on proliferation-related interests, little of this bold agenda has come to pass or is set to materialize in the years ahead. China-India ties have witnessed more top-level political and defense ministerial exchanges over the past couple of years than between the US and India; the road to AfPak stabilization and troop drawdown runs unchanged through Rawalpindi; Washington, DC and New Delhi occupy opposite poles at practically every multilateral trade, economic, and environment negotiation; India's non-prescriptive practice of democracy enlargement and non bloc-based approach to securing the commons contrasts with America's more advocacy-based and a la carte prone model. If anything, the gap between the two countries' worldviews and policies on international and regional matters has widened.

In the afterglow of the US-India civil nuclear agreement, a narrower but seemingly more congruent set of geo-strategic and defense objectives was also envisioned. First, New Delhi would assist Washington in curbing Iran's nuclear ambitions. Second, New Delhi would align with the major maritime democracies of the Indo-Pacific and countervail Chinese power. The veiled possibility of interdicting Chinese sea-bound commerce in the narrow Andaman Sea during an East Asian contingency was a closely-held card. Third, India would cooperate in HA/DR missions and post-conflict reconstruction efforts, including those not mandated or commanded under a UN flag, on both sides of the Indian Ocean. And, fourth, India would provide access at strategic locations across its territory to US military forces - perhaps even 'over-the-horizon' rotational bases, down the line, to deter or manage contingencies in West and East Asia.

Again, aside from gradual cooperation on Iran oil sanctions, little of this ambition has come to pass. Far from growing into its designated role as the US deputy sheriff in the Indian Ocean region (and perhaps someday as a co-partner across the Indo-Pacific region), New Delhi has double downed on its autonomist leanings. It has resisted participating in major multi-service combined exercises that prepare for high-end operational missions, stayed away from stationing personnel at US combatant command headquarters, turned down a series of foundational pacts that would have enhanced logistics and battle-group networking, opted for Russian rather than US high-precision, military-grade navigation signals, opted to strip out tactical interoperability aids (high-end electronics and avionics suites) while purchasing US-origin platforms (P8I and C-130J aircraft), and even allegedly passed up the opportunity to buy a to-be decommissioned supercarrier - the USS Kitty Hawk - for free! (so long as New Delhi agreed to purchase five dozen or so Super Hornet fighters to be operated off the carrier). Defense ties with Japan and Australia too have been limited to the odd naval exercise, with little scope for logistics sharing or information exchange envisaged.

Some $15 billion of US defense hardware sales - not doctrine-sharing exchanges, harmonized force postures or command and control systems integration - has been the sole deliverable for all the exertions. The failure has not been one of effort (or will); rather it has been one of conception.

The disappointments have not tempered the belief of the faithful. Undaunted, it is argued that with the departure of the previous government and its long-serving, proto-socialist defense minister, US and India defense - and particularly mil-mil ties - stand poised to once again break out of policy stagnation.

Washington and New Delhi, it is counseled, should reauthorize and update their 2005 Defense Framework agreement (which they indeed must) to enable collaboration in multinational operations of common interest. The Indian Navy has possessed this latitude to participate in such muscular activities, yet chose to operate its anti-piracy missions in the Indian Ocean region independent of the US-organized Combined Maritime Forces command. Washington should place military intelligence exchanges on the front-burner and formalize institutional links to share classified information on the region. Navy-to-navy intelligence exchange was a key accomplishment of the 2005 Defense Framework agreement, yet the channel lapsed by the end of the decade due to disclosure policy guidelines that limited sharing of actionable or desirable information.

Washington should deepen service-to-service engagements and incorporate service chiefs and regional commanders within institutionalized policy mechanisms, given the military's visibly friendlier interest in such ties. While civilian masters in the Indian Defense Ministry's planning and international cooperation wing have been a rotten impediment, the roots of New Delhi's civil-military dysfunction in fact stem from the unwillingness of senior uniformed folks to shed their operational command profile and assume a policy advisory role. A unified services command and an integrated civil-military MoD is nowhere in sight. Finally, Washington should use the recent DTI initiative (defense trade initiative in the US, defense technology initiative for New Delhi) to graduate the defense sales relationship beyond the buyer-seller model to one of co-development and co-production. Again, while unimpeachable in intent, New Delhi's expansive definition of technology sharing tends to be confined not just to technology itself but the entire know-how behind how a technology is produced, including systems integration and the overall intellectual capital development. The Initiative also risks being oversold in both capitals: it elevates India to one among three-dozen defense partners in terms of preferential categorization - not one among a half-dozen or so such countries as has been advertised.

At bottom, operating in denial of past lessons risks repeating those errors.

In important respects, the questions that went unanswered 15 years ago remain valid today: what is the template by which one operationalizes a defense and strategic partnership with a critically important country that will never be a treaty ally (and is the primary antagonist of a 'non-NATO ally' - Pakistan), yet is more than just a friendly, non-hostile state? Can enhanced defense cooperation and technology handouts infuse a strategic congruence or must the causality run the other way? If technology sharing boosts India's autonomous defense capability, then does it not detract from the fundamental purpose of deepening 'jointness'? If New Delhi, of its own accord, bears a larger share of the region's security burden, what is its imperative to simultaneously tighten its roles and missions 'jointness' with US forces in the region?

The bestowal of an incredibly generous civil nuclear deal as well as the mainstreaming of New Delhi within the international technology-sharing regime, at a moment of US primacy, did not furnish the desired answer to these questions. In the more constrained age ahead, it is not clear why New Delhi's strategic calculation vis-à-vis the US will be any more favorable now. Although China's rise and behavior could supply this rationale, Beijing is a key pivot in India's multi-aligned foreign policy strategy and successive governments in New Delhi have seen greater wisdom in operating in the slipstream of Beijing's meteoric rise than by aligning against it. New Delhi appears to defer to the core interests, principles, and (economic) content laid out in the Xi Jinping government's 'new type of great power relations' and periphery diplomacy initiatives than most other governments in the Indo-Pacific. That most observers continue to implicitly - and lazily - base the 'natural' convergence of US and Indian interest in Asia on the belief that China and India are irrevocably locked in strategic competition may, to the contrary, provide a hint as to why Washington's relationship with New Delhi has serially fallen short of expectations.

The future of US-India strategic ties is too important to be constructed solely or even primarily through a China-management lens. The defense cooperation elements within this relationship - joint exercises, intelligence exchange, arms deals, technology-sharing, weapons co-development and co-production, etc. - should be constructed rather on more modest but firmer foundations that are geared to nudging the Indo-Pacific region's multilateral security relations toward a more consociational model of international relations where power is shared and balanced within. Embracing and working through the balance between autonomy and alignment in the US-India strategic partnership will also lock the two countries in a strategic embrace that will favor freedom in the long run.