Moving the U.S-Vietnam Relationship into the Future 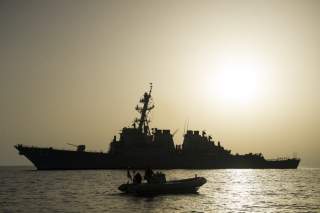 With China looming large in the background, it is easy to characterize the recent warming in relations between the U.S and Vietnam, which culminated in President Obama's latest visit to Vietnam, as a marriage of convenience. While this is undoubtedly true to a certain extent, such characterization fails to capture the full essence of U.S-Vietnam relations and where this relationship is heading in the near future. The U.S and Vietnam have been moving closer together for strategic reasons but this is possible because both sides have been building strategic trust, thereby laying the foundation for a more sustainable partnership in the longer term.

Although Obama visited Vietnam just several months before leaving office and at a time when he is considered by many as a "lame duck" president, this trip has both symbolic and substantive significance. First and foremost, the U.S finally agreed to fully lift its four-decade-old lethal arms embargo on Vietnam, thereby removing one of the last vestiges of the Cold War and paving the way for closer defense cooperation between two countries. Second, both countries also deepened their economic relations as VietJet reached a groundbreaking $11.3 billion deal with Boeing, purchasing 100 Boeing's B737 MAX 200 aircrafts and another $3 billion worth of Pratt & Whitney engines.

At the same time, U.S General Electric and the Vietnamese government have agreed to cooperate in the field of wind energy. To deepen people-to-people ties, Vietnam allowed the Peace Corps to enter the country to teach English in Vietnamese schools and both sides mutually agreed to grant one-year multiple-entry visas for short-term business and tourism travelers from both countries. There is no doubt that these arrangements will make it easier for both Vietnamese and Americans to connect, to share ideas and build long term partnerships.

While it is decidedly true that China's increasingly assertive behavior in the South China Sea has sped up the process of full rapprochement between the U.S and Vietnam, this process had been initiated long ago and at a time when Sino-U.S relations were still fairly cordial. After a lengthy period of negotiations, in 1994, President Clinton finally lifted the economic embargo on Vietnam, paving the way for the full normalization of the U.S-Vietnam relations a year later. In 2000, Clinton became the first U.S president ever to visit Vietnam and in that same year, the U.S and Vietnam also successfully concluded the Bilateral Trade Agreement, which has been fundamental in boosting trade relations between the two countries.

In 2013, during President Truong Tan Sang's visit to Washington, the two countries agreed to upgrade their relations to "comprehensive partnership", signaling that their bilateral relations have entered a new era of deepening cooperation in all aspects. In late 2014, after much consideration, the U.S decided to partially lift its lethal weapons embargo on Vietnam. In 2015, General Secretary Nguyen Phu Trong made an unprecedented visit to the U.S, which led to the U.S-Vietnam Joint Vision Statement - a very important document that laid out a crucial roadmap for future U.S-Vietnam cooperation. In this context, what Obama achieved in this trip is remarkable but also expected as it is a natural result of a process that has been carefully nurtured by both sides for many years.

Nevertheless, it is impossible not to view Obama's trip to Vietnam as part of the "U.S pivot to Asia". While the U.S denies that the trip has anything to do with China, Obama's remarks in Hanoi makes it clear that Washington wants to counterbalance Beijing's attempts to dominate the South China Sea. The decision to fully lift the lethal arms embargo on Vietnam is the highlight among various agreements reached by both sides. Symbolically, this move is important because it sends a robust and unambiguous signal to China that their "gunboat diplomacy" in the South China Sea has backfired. At the same time, it shows Chinese leaders that Vietnam is now important enough strategically for the U.S to set human rights concerns aside and move forward in the field of defense cooperation. This will not immediately change the strategic calculus in Beijing but in the longer term, there are grounds to believe that closer defense relations between the U.S and Vietnam can moderate China's behavior in the region.

Substantively, this decision will allow Vietnam to purchase military hardware that it is in dire needs to enhance its maritime defense capability vis-à-vis China. According to SIPRI, between 2011-2015, Vietnam imports 93% of its arms from Russia. This suggests that Vietnam needs to quickly diversify its arms supplier because too much reliance on a single supplier puts Hanoi in a vulnerable position by giving others too much leverage and leaving itself exposed in the event of a supply shock. It is also worth noting that Russia has been selling similar weapon systems like the Su-35 fighter or S-400 missile defense system to both China and Vietnam. This is understandable from an arms' seller viewpoint but it is clearly disadvantageous for Vietnam because it does not allow having a military edge over China in any area.

While Russian weapons may be cheaper than others, they are not always the most advanced or effective, particularly in terms of C4ISR. This is not to say that the lifting of the arms embargo will immediately result in massive Vietnamese purchase of U.S weapons. In fact, such a scenario is highly unlikely but the fact that Vietnam could now purchase some of the most advanced weapon systems available is significant in and of itself. The struggle over the South China Sea will be a long game of wei qi, not a game of chess that is going to end any time soon so Vietnam's ability to arm itself and deter China in the long run is still immensely important. Furthermore, the fact that the U.S allows Vietnam to buy its weapons despite remaining differences regarding human rights issues is bound to have some spill-over effects in the long term. This decision will allow both sides to build mutual trust, which would permit more far-reaching cooperation in the future.

Last but not least, in a situation where China-Philippines relations, potentially drawing in the United States, become precarious, China will likely watch carefully how Vietnam responds. The Permanent Court of Arbitration is expected to issue a ruling very soon. Substantially, given the reality of State practice in the South China Sea, it doubtful whether China can prove that it has met the conditions to establish historic rights in the South China Sea. In any case, the case law of the International Court of Justice (ICJ) provides very limited support for historic rights as the basis for a State to claim a vast body of water beyond UNCLOS legal framework. It will be difficult for China, therefore, to uphold its claims to historic rights over the entire South China Sea.

Beijing might be motivated to take further actions to solidify its claims before the court decision, or once the court decision is out, to take some “dramatic” actions to demonstrate that it does not have any intention to respect the decision, even if only implicitly. If the siege mentality, a product of the “Century of Humiliation,” kicks in, Beijing might start to see (if not already) smaller neighbors, including Vietnam, as puppets of the United States. From Beijing's perspective, Washington is bent orchestrating a coalition to encroach upon Chinese sovereignty and preventing it from “legitimately” exercising its rights in the South China Sea. Given recent China’s behavior to protect her influence sphere, it is no longer possible to ignore the possible challenge to Southeast Asian countries that border China.

Vietnam’s continuing trade and investment dependence on China is a particular vulnerability. Due it geographic position, Vietnam is also vulnerable to both direct attack and the more complicated “hybrid” warfare. It will take time to reduce that independence. However, serious efforts should be launched and promoted strongly from both sides. What this means is that while Hanoi has scored points with Obama’s visit and the lifting of the lethal weapons embargo, it needs to use this capital wisely and avoid situations that unnecessarily irritate Beijing. Leaders need to carefully consider how to respond to the upcoming court ruling and potential conflicts between China and the Philippines. To maintain stability, considering that nobody is legally obliged to back Vietnam, it might be wiser for Hanoi to pursue a mix of deterrence and enhanced capability, as well as reassurance at the same time.

A strong Vietnam in a united ASEAN is a key American interest. President Obama’s historic visit continuously has laid a robust foundation that could secure U.S-Vietnam cooperation in the longer term to combat China's hegemonic ambitions and other future challenges. Sharing strategic interests between Vietnam and U.S will ensure that this partnership will survive and thrive even when an immediate external threat no longer exists, so that both sides could eventually move beyond a "marriage of convenience" toward a truly comprehensive and strategic partnership.

Ngo Di Lan is a PhD student at Brandeis University, where he focuses on U.S foreign policy and U.S-China relations. He is also a research associate at the Center for International Studies (SCIS) at the University of Social Sciences and Humanities in Ho Chi Minh City.