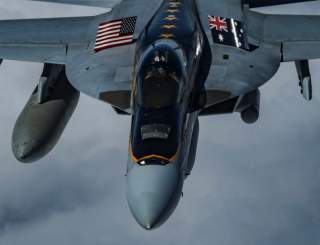 I think it’s this issue to work out the decision loop.

You want to connect the key people that need to be involved in a particular joint fire and potentially jump those who need the information but do not need to make a decision.

BG Mills closed by noting that he had nothing but respect for the U.S. military and its performance during his time of service in the Middle East.

I am in awe over what the US military has achieved in the past two decades supported by the American people.

I have learned a lot working with the United States military.”

Brigadier Chris Mills was born in Brisbane, Queensland, on 10 June 1969. Following graduation from university Brigadier Mills resigned his commission in the Reserves to enlist in the Regular Army and train at the Royal Military College Duntroon. He graduated from Duntroon to the Royal Australian Armoured Corps in June 1991. Brigadier Mills attended the Australian Command and Staff College in 2004 and attained a Masters of Management. Brigadier Mills has served in a range of regimental, training and staff appointments within Army and has served on a number of Joint and Inter-Agency headquarters.

Post staff college, Brigadier Mills was employed as the Military Assistant to the Deputy Chief of Army and worked within the Directorate of Capability and Development, Future Land Warfare, in Army Headquarters. In 2009-10 Brigadier Mills was privileged to be the commander of 2nd/14th Light Horse Regiment (Queensland Mounted Infantry).

Brigadier Mills was promoted to Colonel on 17 January 2011 and assigned the position of Director Military Commitments Army; responsible for overseeing Army’s commitments to operations, domestic tasks and exercises, and managing Army’s preparedness reporting.

In 2013, Brigadier Mills was appointed the J73 in Headquarters Joint Operations Command, responsible for the design, planning and conduct of Joint and Combined Exercises. In 2015, he graduated from the Centre for Defence and Strategic Studies and completed a Masters of Business Administration.

Brigadier Mills has had operational experience in Bosnia and Afghanistan.

In 1999 he was employed within a British Armoured Infantry Battle Group in Bosnia.

Over the period August 2012 to August 2013 he deployed to Afghanistan as the Headquarters Regional Command South Chief of Future Operations, responsible for Divisional level planning and operationalizing base closure.

His academic achievements include a Bachelor of Science, Masters of Management and a Masters of Business Administration. His leisure interests include military history, rugby, distance running and a variety of other outdoor activities.

Dr. Robbin F. Laird is co-founder and senior analyst at Second Line of Defense. He has worked in the U.S. government and several think tanks, including the Center for Naval Analysis and the Institute for Defense Analysis. He is a Columbia University alumni, where he taught and worked for several years at the Research Institute of International Change, a think tank founded by Dr. Brzezinski. His most recent book (with Ed Timperlake and Richard Weitz) is entitled Rebuilding American Military Power in the Pacific: A 21st Century Strategy. This piece originally appeared in Second Line of Defense on April 16, 2016.