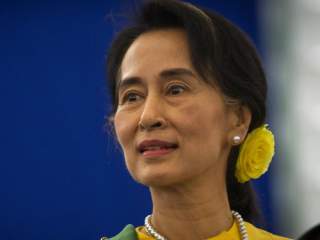 Today is a momentous day for Myanmar, as Aung San Suu Kyi’s National League for Democracy (NLD) takes its place in the country’s parliament, ending decades of authoritarian rule. Following its massive win in last November’s election, the NLD will control both upper and lower houses. The parliament will select a new president when the current incumbent Thein Sein steps down at the end of March.

Although the constitution was drafted deliberately to prevent Suu Kyi from taking that position she has said she will rule “above” a proxy NLD president. This January’s amnesty for over a hundred prisoners, including a number jailed for political activities, suggests that the military-backed regime is continuing down a path to accept democratic government—but even with the NLD taking the political reins reform will be slow.

Myanmar’s geography makes the country a critical player in the strategic calculations of China, India and Southeast Asia and of deep interest to Australia, Japan and the United States. Following the Tiananmen Square massacre in June 1989 and the appalling repression under martial law declared in September that year by Myanmar’s State Law and Order Restoration Council, China and Myanmar developed a close strategic relationship. It was a partnership of convenience, reinforced by the international community applying sanctions to Myanmar.

Beijing suffered an unexpected reverse in September 2011 when the Myanmar government, bowing it said to the “will of the people,” suspended a major hydropower project with China. While China’s economic links dominate, Myanmar is seeking to broaden ties with other countries and put some measured distance between itself and Beijing.

People wanting to understand Myanmar’s rapidly changing place in regional security should read Rajiv Bhatia’s recently published and excellent book India-Myanmar Relations: Changing contours. Bhatia was New Delhi’s ambassador to Myanmar from 2002–05 and has had a career-long interest not only in that key bilateral relationship but more broadly in Myanmar’s strategic position. He sets out a convincing case that India is likely to establish deeper ties with Myanmar, based on cultural and historical connections. Those links are typified by Suu Kyi’s personal associations with India: her mother was ambassador in New Delhi from 1960 to 1967. When Suu Kyi visited India in 2012, she expressed her debt to Jawaharlal Nehru as providing one of the intellectual ‘maps’ that helped her through her long years of house arrest. Ghandi and Nehru, she said, “became my most precious friends because they helped me find my way through uncharted terrain.”

It seems inevitable that Myanmar’s strategic future will be defined by increasing competition between China and India. Bhatia quotes former Burmese Prime Minister, U Nu, describing his country as “hemmed in like a tender gourd among the cacti.” Myanmar’s land border with India is 1,600km long and its border with China is 2,000km long. Lengthy and unresolved insurgencies have been fought across both borders. For India, Myanmar offers a necessary path to development for its land-locked north eastern region. A number of key maritime and road transport projects are seeking to knit the regions closer together. New Delhi sees closer ties with Myanmar as offering a bridge to deeper relations with Southeast Asia and a way of mitigating China’s influence.

Visiting Tokyo in September 2014, Prime Minister Modi referred with evident exasperation to what was interpreted as China’s growing influence: “Everywhere around us, we see an eighteenth century expansionist mind-set: encroaching in other countries, intruding in others’ waters, invading other countries and capturing territory.” It matters deeply to India that Myanmar chooses to balance rather than to bandwagon with China. Bhatia points to “the wall of scepticism that exists in India in view of its past experiences and present day monitoring of China’s actions in parts of South Asia and East Asia.”

For China’s part, Myanmar offers access to the Bay of Bengal. A decade in construction, an oil and gas pipeline linking Myanmar’s deep-water port of Kyaukphyu in the Bay of Bengal with Kunming in Yunnan province of China shows Beijing’s interest in energy supplies that don’t transit the Straits of Malacca. But while completed in early 2015, the pipeline is yet to operate at full capacity because of disputes over agreements relating to transportation, investment and tax terms.

Although Beijing regards the emerging NLD government in Naypyidaw as less helpful to its interests than military rule, it will keep investing in Myanmar to support the roll out of President Xi’s One Belt One Road strategy and a deeper commercial and, ultimately, military presence in the Indian Ocean. China’s trade and investment relationship with Myanmar dwarfs India’s. It needs to warm chilly political ties, which won’t be an easy task.

Meanwhile, Australia’s interests in Myanmar should encourage developing closer economic relations, which are currently miniscule after years of sanctions. Canberra should look to remove the one remaining area of sanctions around military equipment and rapidly boost defense engagement. Canberra stands to benefit strategically from India’s deeper engagement with Myanmar and there may be some opportunities for trilateral cooperation with India and Myanmar on maritime security. Those should be encouraged as part of Defence’s foreshadowed policy to substantially grow regional engagement efforts.

Peter Jennings is executive director at the Australian Strategic Policy Institute. This article first appeared in the Strategist.