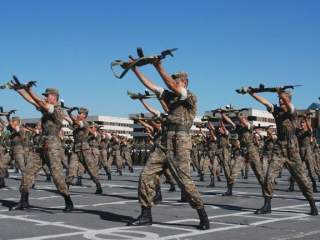 It's actually very simple. Contrary to the statements made in the mass media when it covers the Nagorno-Karabakh conflict, this mountainous region of Azerbaijan is not disputed in any way; it is occupied. So says the international judicial body the European Court of Human Rights. Despite the allegations of Armenia (that have in fact occupied sovereign territory of Azerbaijan) that the remaining ethnically Armenian population of the region has exercised the right to self-determination, it has been proven false again and again. For once, Armenians living in Nagorno-Karabakh are not "people" in the sense of rights that are provided by a UN Charter. Armenians have already exercised that right in Armenia, where they have an internationally recognized state. Thus, making them a national minority on the territory of Azerbaijan and not "Nagorno-Karabakh people". Otherwise, Armenians would have a right to self-determination in U.S., Russia, France and other countries where they have  large communities, creating a horde of small states. This is simply illogical.

No state, including Armenia, has recognized the separatist entity in Nagorno-Karabakh, nor has Armenia laid claim to it. So there is no dispute on the attribution of the region, and the European Court of Human Rights has actually incorporated these facts into international jurisprudence.  On June 16, 2015 Grand Chamber of the European Court of Human Rights passed two judgments on the reciprocal cases Chiragov and Others v. Armenia and Sargsyan v. Azerbaijan. Both cases seemed to have very close and even balanced judgments and  that Court intended not to stir political side of the dispute. However, closer examination shows that this is far from reality and it was impossible for the Court to escape some very serious issues related to the status quo in Nagorno-Karabakh.

For example, in the  Chiragov v. Armenia case, Court addresses the separatist entity "Nagorno-Karabakh Republic" specifically to show that it is not in any way recognized officially. It also establishes the fact that there are no Azerbaijanis left in the occupied territories of the former Nagorno-Karabakh Autonomous Oblast as well as in the adjacent seven regions, essentially acknowledging that Armenians could legally to carry out complete ethnic cleansing within those territories. Those ethnic cleansings resulted in around 750,000 internally displaced persons living in Azerbaijan now and additional 250,000 refugees of Azerbaijani origin expelled from Armenia itself.

The conflict itself being a territorial dispute can be resolved. Ethnic complications can be resolved if the right attitude is employed. The rights of the Armenian minority to culture, language and religion can be guaranteed without violation of Azerbaijan's territorial integrity. Armenians can be equal citizens of Azerbaijan enjoying minority rights and enjoy autonomy. Azerbaijanis have already expressed this proposal many times through its government. However, mass media is somehow twisting the real discourse and disregarding all of the international legal data on the subject in an attempt to be "neutral" when reporting on the conflict. However, neutrality does not necessarily mean objectivity. And objectivity is what the image of the Nagorno-Karabakh Conflict really lacks today. So the discourse that mass media shapes now,  instead of playing in favor of conflict resolution actually helps the hostilities escalate.

If the mass media continues to shape its "neutral" discourse and does not lean on the facts, it will only embolden the Armenia's position of staying on their grounds of occupation and preservation of status quo. This destructive stance on violence as opposed to the compromise would allow Armenia to ensure the rights of its minority in Azerbaijan as true caring kin-state. As American author and renowned though Bryant McGill very astutely points out: "Where wise actions are the fruit of life, wise discourse is the pollination.” In order for the resolution of the conflict to bring some fruits, the discourse should first of all turn to the wise one. While the Nagorno-Karabakh is not a disputed region of Azerbaijan, the discourse around it should become the subject to a very profound change.

Dr. habil. Kamal Makili-Aliyev is a Leading Research Fellow at the Center for Strategic Studies (SAM) in Azerbaijan. He is an expert in international law and conflict resolution. He is a graduate of Lund University (Sweden) and previously worked for Ministry of Defense and Constitutional Court of Azerbaijan.