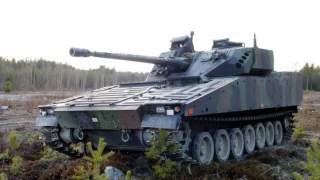 The Netherlands will likely be the first NATO country to field an operational active protection system (APS) onboard its CV90 Infantry Fighting Vehicles. BAE Systems has been awarded a contract by the Dutch government to integrate, test and verify the Israeli-made IMI Systems Iron Fist APS on the CV90.

“During this test phase we will pre-qualify the active system against our threat specification, and together with our partners analyze system safety and prepare for its integration onto our CV9035NL vehicles,” said Hans de Goeij, project manager at the Netherlands Defense Materiel Organization, Ministry of Defense in a statement. “We expect to make a decision on the next phase by early 2018. With Iron Fist, the Netherlands is expected to become the first NATO country with an Active Protection System of its kind on combat vehicles.”

The Iron Fist APS is consists of countermeasures that can intercept incoming rocket-propelled grenades, anti-tank missiles and other threats to increase vehicle survivability. Iron Fist uses a radar to detect and track threats and then automatically takes action to counter the incoming round. BAE Systems—which builds the CV9035NL—will lead the APS integration effort. The company will also install the system if and when (likely 2018) the Dutch decide to field the Iron Fist operationally.

“Iron Fist will give the Dutch Army a highly sophisticated defensive tool on its CV90s to counter threats and improve the safety of the vehicle and its crew,” said Tommy Gustafsson-Rask, managing director of Sweden-based BAE Systems Hägglunds in a statement. “Iron Fist is yet another example of the advanced technology BAE Systems and its partners can deliver to our customers.”

APS is increasingly becoming a necessity for armies around the world as the modern battlefield evolves. Increasingly, even the most heavily armored vehicles such as the American-made Abrams main battle tank and the German Leopard 2 are vulnerable to advanced anti-tank missiles like the Russian-made 9M133 Kornet-E. Indeed, in recent months videos and photos of destroyed Saudi and Iraqi-owned M1 Abrams and Turkish Leopard 2s have emerged that demonstrate how dangerous some of these new missiles are even in the hands of relatively poorly trained insurgents.

As a countermeasure to the growing threat, armies around the world are increasingly starting to adopt active protection systems to help increase the survivability of the their armored vehicles. The Russians and the Israelis have taken the early lead, but APS technology is starting to proliferate around the world.