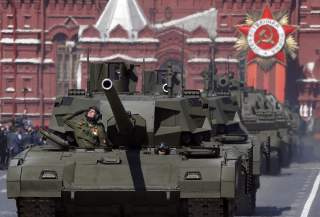 The technology sounds like a lethal Rube Goldberg machine: an electrical circuit generates high voltage pulses, that ignites a plasma cartridge that then triggers explosives to propel projectiles at extreme velocity. But this technology, referred to as an Electro-Thermal Chemical (ETC) gun, might be NATO’s silver bullet when it comes to penetrating the next generation of advanced Russian tanks. ETC guns could also be employed in a naval role to allow more accurate and longer ranged naval fires than possible with conventional munitions, at far lower costs than the railgun. The roots of ETC guns are based in Cold War studies for methods to counter the ever-increasing levels of protection that were expected to be found on future Soviet tanks. According to threat reports at the time, the protection levels of Soviet tanks that were expected to be fielded in the mid 1990s would outclass all fielded anti-tank projectiles.

To counter this, research began in the 1980s into pure electric gun technology such as railguns. However, due to the immense power demand for such systems, these soon fell out of favor. ETC guns evolved out of this as a way to get performance increases with less demand for electrical power. ETC guns were considered a medium-risk technology, between larger conventional tank guns and railgun technology, as it incorporated elements of both. They also are more adaptable to current projectile and gun designs, as they use conventional projectile and gun designs.

So how do ETC guns work? In an ETC gun, the firing sequence starts when an electrical pulsed power system (PPS) sends a strong electrical pulse into the ETC gun. This pulse triggers the plasma igniters, which turns the electrical pulse into plasma. The blazing hot plasma, burning at more than 400 degrees Celsius, acts as a catalyst for the ignition of the propellant. The extremely energetic nature of the plasma results in a stronger and more drawn out detonation of the propellant in an ETC gun cartridge than in a cartridge triggered by conventional means. In some ETC gun systems, the PPS will continue to fire electrical pulses that trigger further “waves” of plasma, ignition, and pressure, increasing the power of the gun even more. The resulting effect is higher pressure, which means higher muzzle velocity and energy. Practically, this means that the gun will punch through thicker armor and shoot further and more accurately.

ETC technology also has other technological advantages. With conventional ammunition technology, differences in temperatures result in different burning rates for different propellants. If two rounds are fired at different temperatures, they will have different muzzle velocities and thus different points of impact. With ETC guns, the plasma provides incredibly consistent ignition across the entire temperature range, resulting in almost no variance in muzzle velocity. The virtual elimination of the temperature factor is another way ETC guns are superior in accuracy to conventional guns.

Another breakthrough benefit of ETC gun technology is the insensitive munitions potential of ETC technology. Since the plasma used to ignite the ETC gun cartridge is incredibly energetic, ETC cartridges can be engineered to be insensitive to other methods of firing. Given that the worst fear of any tank crew is the detonation of their own ammunition by a penetrating projectile, ETC tank rounds that are insensitive to penetrating jets would be a quantum leap in survivability for a future main battle tank. While this benefit was only a speculative one in a 1999 report on ETC gun systems, it recently has been brought into fruition the DARPA-funded project “Direct Plasma Production from Electric Solid Propellant for High Velocity Launch Systems”. The electric solid propellant (ESP) used in the new generation of ETC guns in the project proved insensitive to gunshots, nearby explosions, and burning. The ESP does not even continue to burn after being set on fire!

With all these benefits to ETC technology, why hasn’t it been implemented it yet? Primarily, the demise of the Soviet Union meant that many advanced tank projects were put on hold. As part of the “peace dividend,” many advanced anti-tank research projects fell to the wayside. Plans for 140mm tank guns and railguns, alternative solutions to the same problem ETC guns were designed to tackle were also shelved. Even more conventional projects such as the STAFF round were canceled to save money. ETC gun technology did make it into some prototypes before the cancellations. The XM291 120mm cannon had an ETC variant planned, but it suffered the demise described above. A German test 120mm ETC cannon achieved fourteen Megajoules (MJ) during test firings, but these were expected to increase to fifteen MJ later on. This is a significant increase compared to the around twelve MJ put out by the M256 cannon on the M1A2 Abrams, the U.S. Army’s current premier main battle tank.

However, the end of these projects did not spell the demise for ETC guns. In 2004, a report put out by the Research and Technology Organization for NATO laid out a framework for a future Electric Combat Vehicle (AECV). ETC guns were considered as possible armaments for this future vehicle. In the report, ETC guns were shown to be far more power efficient than railguns, requiring an estimated forty megawatts per shot compared to the 550 megawatts per shot of the railgun in the application of being the armament for a seventeen-ton scout vehicle. The aforementioned DARPA contract also shows future potential for ETC guns in the naval role. ETC guns have the advantage of achieving similar barrel lifespan and rate of fire to existing gun systems while extending range and accuracy. It is also listed as the most mature technology compared to combustible gas-gun and railgun systems. ETC technology could bridge the range gap between standard munitions, extended range precision munitions, and railgun munitions.

ETC gun technology is the edge NATO might need in a future confrontation. Making guns hit harder, more accurately, out to a further range could prove a decisive advantage in any battle.