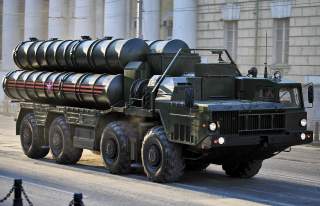 The agreement is not final, but the deal—if it goes through—could be yet another indication that Ankara is starting to shift its alignment towards the Kremlin.

Further, the agreement might also be a signal from Ankara aimed at the European Union. The EU, in previous years, had recognized Turkey as a candidate for membership into that bloc, but the 28-member union voted to suspend already moribund accession talks with Turkey on Nov. 24, 2016, in the wake of a series of purges that followed a July 15, 2016 coup attempt to overthrow Turkish president Recep Tayyip Erdoğan.

“Politically, Turkey may be sending a strong message to the EU,” Center for Naval Analyses researcher Sam Bendett told The National Interest.

However, while the deal would be significant if it were finalized, Turkey had previously reached a preliminary deal with China to purchase Beijing’s potent HQ-9 air defense system in September 2013. However, Ankara scrapped the deal in November 2015 under pressure from Washington and other NATO allies.

“I think it is too early to say anything. In 2013 there was a similar preliminary decision by Turkey to buy Chinese HQ-9 systems but that failed to materialize,” Vasily Kashin, a senior fellow at the Center for Comprehensive European and International Studies at Moscow’s Higher School of Economics, told The National Interest.

However, this time around, given the tensions between Ankara and Washington over the later’s support for Kurdish rebels in Syria combined with the Europeans’ distaste for Erdoğan’s increasingly autocratic rule, the chances of a deal being finalized are looking more promising.

“The deal may still fall through at the very end, but it’s starting to look like it may actually go through,” Bendett said.

Ankara certainly needs modern air defense systems and hopes to gain the technology to build its own similar systems. Thus, a final deal will likely hinge on the degree of technology transfer Moscow is willing to afford Turkey.

According to Bloomberg—which broke the story—the Russians will supply two S-400 batteries and allow Ankara to license build two additional systems, but the exact details have yet to be worked out. Thus far, the Russians have not offered official comment on reports of the deal, which could be worth more than $2.5 billion.

But while the Russians seem willing to sell Turkey some of their most advanced air defense weapons, Moscow is not likely to part with all of its secrets. Turkey will likely receive a less capable export version of the S-400.

“The S-400 comes in a number of configurations, and besides, we expect to have the S-500 in the coming years,” Kashin said.

“Turkey is an increasingly important partner, although a difficult one.”

Bendett agreed that Turkey is not likely to receive the most capable version of the S-400.

“A modern military should have modern air defenses - that is what Turkey is striving for as it fields new systems,” Bendett said.

“But it’s likely that the Russians will not sell the latest S-400 version to the Turks, or sell it with certain caveats. Either way, this is in line with Turkey's massive weapons modernization drive that saw the emergence of new land, air and sea-based systems for domestic use and export.”

The Turkish purchase could be beneficial for the United States and its NATO allies if the deal is finalized and Ankara remains oriented towards the West. Turkey’s acquisition of the S-400 would afford NATO a valuable up close look at the system’s operational capabilities and limitations—and devise a means to neutralize it. Even a degraded export version of the S-400 would provide the West with insights on how to defeat Russia’s latest air defenses.

But a finalized deal might also mean that Turkey meant to forge its own path, one that is more oriented towards the Kremlin. And that is not likely to be received as good news here in Washington.