NATO vs. Russia: Why Europe's Greatest Risk for War Is in the Baltics 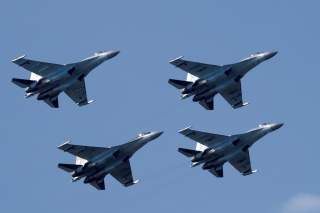 Since 2014, the NATO alliance has made numerous posture changes on its eastern flank to deter Russia. Essentially, the alliance’s goal is to change Russian behavior, but how does one measure such policy modifications in Moscow? The RAND Corporation recently released a new report that attempts to build an analytical framework to do just that.

“Despite its overall military advantages, NATO faces an imbalance in conventional capabilities in regions bordering Russia, such as the Baltics,” reads the report.

“To address this local imbalance, analysts and policymakers have designed proposals to increase the apparent costs and reduce the probability of success of any attack on a NATO member that Russia might contemplate.”

The goal is to change Russian behavior in a way that is favorable to the alliance—thus NATO has to be careful not to provoke the wrong response. As such, knowing how far to push Moscow is of paramount importance to NATO.

“Whatever posture enhancements the United States and NATO decide to pursue, their goal is to produce a change in Russian behavior,” RAND states.

“Therefore, the nature of Russian responses will determine the utility and advisability of whatever actions NATO decides to take.”

There are many potential ways the Russians could respond. They might do nothing or there might be a military response. Thus, gauging the Kremlin’s reactions correctly is important.

“Potential Russian reactions could run the gamut, from tacit acceptance of U.S. and NATO actions and a reduction in any willingness to consider an attack on NATO, to a sharp increase in nearby Russian forces designed to counterbalance U.S. and NATO moves, to a precipitous escalation to direct conflict. Russia could also respond to U.S. and NATO military moves by attempting to exploit nonmilitary vulnerabilities in the United States or other NATO countries,” the report reads.

As of right now, NATO has a robust deterrent capability against the Russians in the East.

“Our analysis suggests that NATO’s deterrent against a conventional attack by Russia on a NATO member is currently strong,” the RAND report states.

“Implementation of already announced U.S. and NATO posture enhancements is most likely to further decrease this already low risk of an attack. The current strength of NATO’s deterrent stems from its large edge in overall conventional capabilities and the strong signals, enhanced by clear actions and statements since 2014, that NATO, and the United States in particular, would respond militarily to any aggression against the Baltic States or other NATO allies where posture enhancements are being implemented. Therefore, it is highly likely that Russia perceives that any aggressive actions sufficient to trigger Article 5 of the North Atlantic Treaty would result in direct military conflict with at least several key NATO members.”

According to the report’s authors, the Russians have no intention of attacking any NATO member in the near term.

“While we assess that a Russian attack on NATO in the near term is highly unlikely, it also seems probable that Russia will explore other avenues to signal its displeasure with ongoing U.S. and NATO posture enhancements,” the report states.

“Russia has already announced that it intends to adjust its domestic force posture on its western borders to compensate for a larger NATO presence. In the past, Russia has used a variety of mechanisms to respond to U.S. and NATO actions that it perceives as threatening; such mechanisms include withdrawing from multilateral security treaties, sending forces for provocative out-of-area deployments in the Americas, and threatening to base Iskander missiles in Kaliningrad, among others.“

However, NATO and Russia are likely to be locked in a new Cold War far into the future.

“Russian elites increasingly appear to have concluded that the long-term goals of the United States and NATO are not compatible with the security of the current regime in Moscow,” the report states.

“Russian leaders have noted with concern the steady conventional posture enhancements in Eastern Europe (now including former Soviet territory), ballistic missile defense systems, and the shift in strategic orientation of states that Russia views as clearly within its sphere of influence.”

At the core of the problem is that while the Russians can deter a military attack, the Kremlin sees NATO and Washington as attempting to subvert Moscow domestically.

“Although the threat of retaliation from Russian strategic nuclear forces can prevent a direct attack on Russia, other Russian security concerns, including political threats to Russian regime stability, are not accepted as legitimate by the United States and NATO,” the RAND report states.

“Until it changes, this perception is likely to continue to increase the risk of conflict in Europe.”