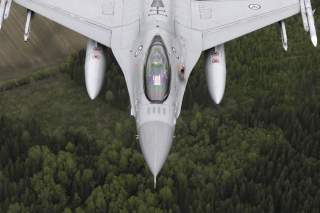 This summit will be another historic milestone for the alliance to determine NATO’s future. Given that most resources at the alliance’s disposal demonstrate a proclivity toward conventional military thinking, NATO must embrace its status as a second mover, and prioritize the implementation of a new approach or risk fading into irrelevance. In short, it must grapple with political warfare.

Image: A Norwegian Air Force F-16 fighter plane patrols over the Baltics during a NATO air policing mission from Zokniai air base, Lithuania, May 20, 2015. Reuters/Ints Kalnins