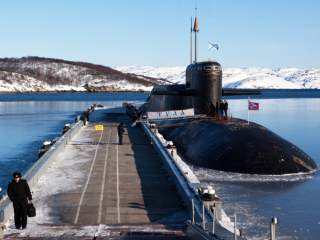 Russian submarine activity in the North Atlantic has climbed back up to Cold War-era levels after a prolonged lull following the collapse of the Soviet Union. Moreover, modern Russian submarines are more capable than ever before—which is causing consternation within the NATO alliance.

NATO submarines are seeing “more activity from Russian submarines than we've seen since the days of the Cold War,” Royal Navy Vice Adm. Clive Johnstone, commander of NATO's Maritime Command told IHS Jane’s. He added that NATO submarines are encountering “a level of Russian capability that we haven't seen before.”

New Russian submarines are far superior to anything the U.S. Navy or NATO encountered during the Cold War. “Through an extraordinary investment path not mirrored by the West,” Russia has made “technology leaps that [are] remarkable, and credit to them,” Johnstone told the British defense trade journal. As such, modern Russian submarines “have longer ranges, they have better systems, they're freer to operate.”

Johnstone’s comments mirror earlier comments by U.S. Navy Rear Adm. Dave Johnson, Naval Sea Systems Command’s (NAVSEA) program executive officer (PEO) submarines. “We’ll be facing tough potential opponents. One only has to look at the Severodvinsk, Russia’s version of a [nuclear guided missile submarine] (SSGN). I am so impressed with this ship that I had Carderock build a model from unclassified data,” Johnson said during the 2104 Naval Submarine League’s symposium in Falls Church, Virginia. “The rest of the world’s undersea capability never stands still,” he added.

It’s not just hardware. As the U.S. Navy’s Office of Naval Intelligence has noted, Russia has been working to increase the professionalism of its naval forces. Moscow has paid particular attention to its submarine fleet, which has maintained formidable capability even as much of the rest of the once mighty Soviet fleet rusted away in port. Indeed, that investment seems to have paid off as NATO has “seen a rise in [Russian Navy] professionalism and ability to operate their boats that we haven't seen before,” Johnstone said. “That is a concern.”

While the Russian fleet has recovered from its post-Soviet malaise, it remains to be seen if Moscow can continue to fund its modernization and professionalization efforts given Russia’s weakening economy.