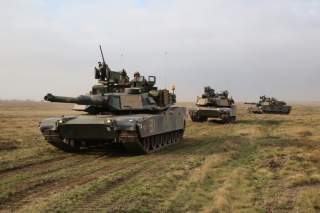 Anyone who came of age in the 1990s or flipping channels late at night now, remembers the theme song of the television show Friends intoning, “I’ll be there for you / when the rain starts to pour.” For two years since the Russian occupation of Crimea and subsequent actions in the Donetsk region of Ukraine, NATO has essentially been in a standing Article 4 consultation session: “The Parties will consult together whenever, in the opinion of any of them, the territorial integrity, political independence, or security of any of the Parties is threatened.” With the metaphorical rain falling, the Alliance has slowly moved towards a plan to deter Russia and assure the easternmost states in the Alliance, a plan that will come to fruition at the Warsaw Summit. Since February 2014, where has the alliance been, where does deterrence go, and what is the plan?

It was not until the end of April 2014 that the first concrete response was seen with NATO ground forces—specifically small continents of American paratroopers landing in Poland and the Baltic States. “It’s a message to anyone who will listen…the United States of America will honor its commitments to Lithuania” said Major General Richard Longo, the deputy commanding general of United States Army Europe, echoing the sentiment of remarks by Lithuanian president Dalia Grybauskaite, “We know in this situation who our real friends are…If just one of our guests is harmed, this would mean an open confrontation, not with Lithuania but with the United States of America.” This is the essence of the deterrence plan which the alliance is now embarking upon with the coming announcement at the Warsaw Summit.

Having spent twenty years in a post–Cold War security environment the Alliance is relearning territorial defense and deterrence. As T.R. Fehrenbach said in his analysis of the Korean War ,“ you may fly over a land forever; you may bomb it, atomize it, pulverize it and wipe it clean of life—but if you desire to defend it, protect it and keep it… you must do this on the ground, the way the Roman legions did, by putting your young men in the mud.” Both Fehrenbach and Grybauskaite recognize the truth that nothing demonstrates resolve and commitment like putting boots on the ground. Only then does a nation have blood in the game.

The combination of anti-access/area denial capabilities and Russian “new-generation warfare” can create murky situations that may fall below the convention threshold for intervention. Is the appearance of little green men or the formation of a militia by a ethnic minority in revolt against a central government sufficient to bring action under NATO’s Article 5? It is unlikely that the alliance could get an accurate understanding of the situation, conduct consultations and react in time to an attack utilizing new-generation warfare. The small size of the Baltic States could allow for a fait accompli like that described in a recent RAND report.

In such an opaque and complex situation, combining military and political warfare to deny access, and have plausible deniability of actions, deterrence by denial is the only plausible way to stop potential adversaries. The establishment of a spearhead Very High Readiness Joint Task Force (VJTF) to respond within forty-eight hours was a start, but those forty-eight hours begin with the decision to act, and decisions take time. In such a situation, the VJTF (currently comprising the Spanish 7th Light Infantry Brigade) may be mobilized, and arrive too late to be of use.

The RAND study recommends multiple brigades of heavy mechanized forces to defeat a Russian attack, a course of action not currently feasible or acceptable. A forward presence changes the calculus, acting as deterrence by denial, preventing the attack rather than repulsing it. Having forces and blood in the game from other alliance members will successfully change the calculus of any action against the Baltic states and other NATO members on the eastern flank by ensuring all member states will be involved from the start of potential hostilities.

The United States has acted upon its obligations—as Major General Longo proclaimed “we have the capacity, we have the commitment, we have the will to fulfill our NATO obligations… [these] exercises demonstrate the commitment of the alliance.” Washington has committed more than $1 billion to the European Reassurance Initiative and carried out Operation Atlantic Resolve, carrying the load with land forces based in Europe and rotational units from the United States. As a NATO member, it is only right that we shoulder our share of the burden, but the question must be asked: where is the rest of the Alliance? Warsaw needs to answer that question.

Warsaw’s expected official announcement of the establishment and composition of a multinational brigade to assure allies and deter potential Russian designs upon them will be the central piece. By analyzing open source media, it appears the NATO will establish a brigade comprising four battalions, with a framework nation providing the bulk of each battalion, supplemented by other members of the alliance. Although no details on the brigade headquarters have emerged, an assumption is that the announced rotational presence of a U.S. Army Armored Brigade Combat Team will provide command and control of the battalions under a NATO command structure.

Canada, long a stalwart will continue its strong contribution to collective security with the establishment of a battle group in Latvia, comprising the second-largest pledged contingent and building on their near continuous presence of a reinforced company participating in exercises. This is well within the capabilities of Canada, which previously maintained a small brigade in Afghanistan for several years.

Surprisingly, Germany is taking a more active role in this operation despite recent comments by their foreign minister warning against “saber-rattling” against Russia.  So far two hundred soldiers—less than a battalion—have been pledged, so other contingents will augment the German framework. Belgium and the Netherlands are the most likely partners due to common equipment, linguistics, and prior cooperation in the 1st German-Netherlands Corps.

The first major surprise is the announcement of the UK as lead nation for the battalion in Estonia. Due to long UK-Polish ties and as the most exposed position, it seemed destined that the United States would be the lead nation for Estonia. However, the UK will be the lead nation, providing a five-hundred soldier battalion augmented by Danish and French companies. The presence of a UK-led battalion places a capable and reliable NATO partner in the most exposed position, without the same level of antagonism that would come from the presence of U.S. forces.

Lastly, the United States, in establishing a permanent rotational presence of an armored brigade in Europe, will be a lead nation, maintaining a battalion in Poland along with an Advisory Team provided by the UK. A second surprise found in the announcement of the agenda for the Warsaw Summit by NATO secretary general Jens Stoltenberg is the establishment of a second multinational brigade in southeastern Europe, centered on Romania. This force is likely to comprise a second U.S. battalion, plus enablers centered on the infrastructure established for the semi-defunct Task Force East in Bulgaria and Romania.

These two battalions comprise only half an American armored brigade, leaving the remainder unaccounted. As U.S. rotations are likely to be nine months instead of shorter durations, the remaining battalions will likely be based in Germany at Baumholder or Grafenwoehr where armored brigades were previously stationed. These additional battalions will provide forces to conduct exercises with NATO partners, and will likely rotate to the more austere locations in Poland and Romania.

The United States filled the breach for nearly three years. Finally, the alliance is filling the breach. As fielding the brigade was a NATO decision, it represents the consensus and will of all twenty-eight members of the Alliance. The establishment of these brigades and increased alliance presence will ameliorate some of the anger over the lack of burden sharing being heard in the United States. It is worth noting, however, the same countries again seem to be consistently providing more than their share, specifically Canada, the United Kingdom, and the United States. Twelve states not bordering Russia were able to maintain a battalion-or-larger-sized force in Afghanistan, so the capability exists within the alliance.

It is not worth speculating on national caveats, rules of engagement, or command and control of the multinational brigades, all of which are vital and can influence the success or the failure of the mission. Going forward, increased participation in sourcing forces by other NATO allies will represent a good-faith demonstration to the United States that NATO allies can be security providers rather than consumers. Warsaw does, however, represent a vital first step in providing the needed deterrence to adversaries, and assurance to allies. As collective security requires and the end of the Friends theme song suggests, “I’ll be there for you, ‘cause you’re there for me, too.”

Robert Wilson is a former United States Army infantry officer. He currently resides in the Washington D.C. area, and is pursuing a graduate degree in international relations.