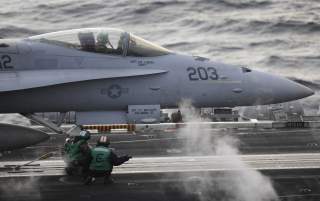 CANES is being installed on carriers, amphibious assault ships, destroyers and submarines, and the service has completed at least 50 CANES systems and has more in production, Navy developers said.

Upgraded CANES, which relies upon hardened cyber and IT connectivity along with radio and other communications technologies, is being specifically configured to increase automation - and perform more and more analytical functions without needing human intervention. It is one of many emerging technologies now being heavily fortified by new algorithms enabling artificial intelligence, senior Navy leaders explain.

“Using AI with CANES is part of a series of normal upgrades we could leverage. Anytime we have an upgrade on a ship, we need the latest and greatest. Navy developers (Space and Naval Warfare Systems Command) have a keen eye of what we can build in - not just technology sprinkled on later but what we can build right into automation on a platform. This is why we use open standards that are compliant and upgradeable,” Rear Adm. Danelle Barrett, Navy Cybersecurity Director, told Warrior in an interview. “It can seem like a disconnected environment when we are afloat.”

Among many other things, fast-evolving AI technology relies upon new methods of collecting, organizing and analyzing vast amounts of combat-relevant data.

“We consider the whole network, just like any system on an aircraft, ship or submarine. These things allow the Navy to protect a platform, ID anomolous behavior and then restore. We have to be able to fight through the hurt,” Barrett said.

Surface ships such as the Littoral Combat Ship, rely upon a host of interwoven technologies intended to share key data in real time - such as threat and targeting information, radar signal processing and fire control systems. CANES connectivity, and AI-informed analysis, can be fundamental to the operation of these systems, which often rely upon fast interpretation of sensor, targeting or ISR data to inform potentially lethal decisions.

The LCS, in particular, draws upon interconnected surface and anti-submarine “mission packages” engineered to use a host of ship systems in coordination with one another. These include ship-mounted guns and missiles along with helicopters, drones such as the Fire Scout and various sonar systems - the kinds of things potentially enhanced by AI analysis.

“We are very interested in artificial intelligence being able to help us better than it is today. Industry is using it well and we want to leverage those same capabilities. We want to use it not only for defensive sensing of our networks but also for suggesting countermeasures. We want to trust a machine and also look at AI in terms of how we use it against adversaries,” Barrett said.

Nodes on CANES communicate use an automated digital networking system, or ADNS, which allows the system to flex, prioritize traffic and connect with satcom assets using multiband terminals.

CANES is able to gather and securely transmit data from various domains and enclaves, including secret and unclassified networks.

Carriers equipped with increased computer automation are now able to reduce crew sizes by virtue of the ability for computers to independently perform a wide range of functions. The Navy's new Ford Class carriers, for instance, drop carrier crew size by nearly 1,000 sailors as part of an effort to increase on-board automation and save billions over the service life of a ship.

Along these lines, Navy engineers recently competed technical upgrades on board the Nimitz-class USS Truman carrier by integrating CANES, officials with Navy SPAWAR said in a statement.

The current thinking, pertinent to LCS and other surface vessels, is to allow ship networks to optimize functions in a high-risk or contested combat scenario by configuring them to quickly integrate new patches and changes necessary to quickly defend on-board networks. Computer automation, fortified by AI-oriented algorithms able to autonomously find, track and - in some cases - destroy cyberattacks or malicious intrusions without needing extensive and time-consuming human interpretation.

“We see that the more we can automate our networks, the more we can use machines to do the heavy lifting. Our brains do not have the capacity from a time or intellectual capacity to process all of that information. It is imperative to how we will be able to maneuver and defend networks in the future. We can have more automated defenses so that, when things happen, responses can be machine-driven. It won’t necessarily require a human,” Barrett said.