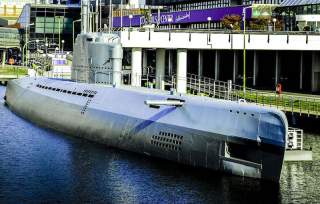 The following morning U-546, commanded by Lt. Capt. Paul Just, began lining up an attack run on the escort carrier USS Core when the destroyer-escort USS Frederick C. Davis detected it and attempted to intervene. U-546’s acoustic homing torpedo struck the American vessel, breaking it in half in five minutes, losing 115 of its crew of 209. The nearby DEs swarmed around the submerged U-546 and pelted it with Hedgehogs for ten hours, until it finally surfaced. The badly damaged submarine was promptly blown to pieces by vengeful Allied shells.