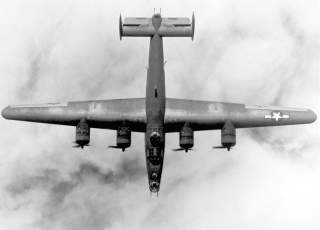 Nazi Germany famously used V-1 cruise missile and V-2 ballistic missile “Vengeance Weapons” to bomb London in retaliation for the Allies’ strategic bombing campaign of Germany. However, a third Vengeance weapon—the V-3 super cannon—was also developed and even briefly used in action, though not against its intended target. The V-3 might well have been the project of a villain in a James Bond movie: it was an impractical weapon housed in a secret underground base built at immense expense, intended to terrorize the civilian populace of a major city.

The concept behind the V-3 had its origin in the German Kaiser Wilhelm guns that entered action in March 1918, during World War I. The massive Krupp guns could shell the French capital from seventy-five miles away, and were the first weapons capable of shooting a projectile into the stratosphere. The Paris Gun’s greatest “success” came when a shell collapsed the roof of the St. Gervais church, killing ninety-one people attending a Good Friday service. In all, around 350 shells were fired, killing 250. Like many later campaigns by both sides in World War II, which went to great expense to randomly kill civilians on the premise that it would weaken the adversary’s will to fight, the bombardment was as militarily unproductive as it was ethically dubious.

Nonetheless, the French were spurred to design their own gun that could fire back at the German superguns, using the principle of multiple charges blasting down the length of the barrel to achieve the necessary muzzle velocity. This concept had earlier been tested by the American Azel Lyman and the Frenchman Louis-Guillaume Perreaux, to mixed results.

The Paris Gun had required such powerful propellant charges that each shot literally stripped the barrel with its passage, requiring a larger-caliber shell for each subsequent shot. The barrels had to be withdrawn for repairs after sixty-five shots, making sustained bombardment impossible. However, by using the multiple smaller accelerating charges, the strain on any one component of the barrel was reduced.

World War I ended before the French supergun could go into development. However, twenty-four years later, German engineer August Cönders discovered the patent in Nazi-occupied Paris, and decided to pursue the concept. After testing a miniature version using components from twenty-millimeter flak cannons, Cönders presented the idea to war production minister Albert Speer, who convinced Hitler to devote significant resources to the project. The idea was to build two batteries of cannons that could spit out shells traveling at 1,500 meters a second in order to bombard London from across the English Channel. The batteries would in theory be able to fire off six hundred shells per hour, twenty-four hours a day, reducing the British capital city to devastated rubble.

In full Doctor Evil mode, Hitler authorized construction of a sprawling secret underground lair near the French village of Mimoyecques in the Pas-de-Calais region to house the guns—even though their performance remained untested. More than five thousand engineers and construction workers, supplemented by Russian POW slave labor, were committed to the project.

The enormous cannons, designated HDP for “High Pressure Pumps” so as to conceal their true purpose, had barrels one hundred meters in length—slightly longer than a football field. The cannons were smoothbore (unrifled) to enable a higher muzzle, and relied on fins on special finned shells for stability. The barrels were laid along tunnels dug into the side of a hill—called “drifts”—with a fifty-degree slope, all zeroed in to fire in the vicinity of Westminster Bridge. Their “millipede” barrels were composed of bolted modular sections lined with pairs of solid-fuel rocket booster chambers perpendicular to either side of the barrel. These vented gases that accelerated the shell as it traveled down the barrel’s length.

A total of ten drifts were planned to house fifty of the immobile guns, which would be deployed to two separate underground bunker facilities, each benefitting from sliding armored doors to protect against the anticipated counter strikes. A railway line would funnel ammunition to the guns from the outside world for the planned round-the-clock bombardment of the English capital, while another underground tunnel connected the two bunkers. Ultimately, one thousand men from the newly formed 705th Artillery battalion were to man the secret facility.

However, when Cönders finally had a chance to test a prototype gun at the island town of Międzyzdroje, Poland in 1943, the results were less than promising. The multi-charge mechanism was difficult to synchronize, and the 150-millimeter shells proved unstable and only attained a muzzle velocity of one thousand meters a second, rather than the necessary 1,500 meters. This, of course, was after tens of thousands of the specialized shells had already been produced. The farthest the gun ever managed to fire was fifty-eight miles in July 1944—although the prototype eventually blew itself up, bringing an end to the tests.

Back in 1943, French spies had alerted British intelligence that the Germans were up to something big near the Pas-de-Calais, and reconnaissance photos from spy planes soon revealed the massive German construction project and the gun tunnels. The Allies couldn’t figure out what exactly the Germans were up to at the site, but they suspected it involved launching V-2 missile attacks on Britain. The Allied leaders instructed Eisenhower to eliminate the threat, which he attempted to do with 4,100 tons of aerial bombs.

The early raid beginning in November 1943 did not cause extensive damage, but led the Germans to abandon plans to build the western battery complex. However, on July 6, the British dispatched the Lancaster bombers of the elite Number 617 “Dambuster” squadron to drop massive 11,900-pound ground-penetrating Tallboy bombs on the Mimoyecques complex, causing one of the drifts to cave in entirely and burying over three hundred workers alive.

Not satisfied, in August the U.S. Navy then attempted to launch two kamikaze drone attacks on the site using a remotely piloted version of the B-24 Liberator heavy bomber called the BQ-8. The drone technology of the time, however, required two pilots onboard for the takeoff of the drone aircraft. Once airborne and on course, the pilots bailed out and allowed a crew on an accompanying plane to remotely pilot the explosive-laden aircraft into the target.

One of the drone pilots was Joseph P. Kennedy, Jr., the older brother of the future U.S. president. Shortly after lifting off, a circuit shorted in Kennedy’s BQ-8, and his Torpex explosive-laden plane blew apart in a massive midair explosion over Blythburgh, England. Although no remains could be recovered for burial, the young Kennedy is memorialized in England and France.

Ironically, the drone attacks were in vain as the Germans had already ended construction of the Mimoyecques facility near the end of July as it became clear Allied troops advancing from the Normandy beachhead would eventually overrun Calais. Thus ended Hitler’s plot to bombard London with superguns.

Canadian troops finally overran the Mimoyecques facility on September 5, 1944, and after at first speculating that the Germans had been constructing an electromagnetic railgun, the Allies at last figured out the purpose of the site. Later, Churchill said the guns “might well have seen London as shattered as Berlin.” The alarmed British, perhaps still not trusting the French, eventually packed the facility with thirty-five tons of explosives and blew it to kingdom come, not once but twice, in May 1945, in order to ensure it could never be completed.

The excavated remains of the underground base in Mimoyecques were eventually repurposed first into a mushroom farm, then to serve as a reserve for endangered bats and a historical museum, including a replica of one the guns. A plaque there commemorates the Allied airmen and slave laborers that died in attacks against the ill-fated vengeance weapon.

The German Army still managed to deploy a battery of V-3 guns to a ravine in Lampaden, near Trier, Germany, though these had shorter fifty-meter-long barrels. Two of the guns were finally used in action during the Battle of the Bulge, starting a bombardment of the city of Luxembourg on December 30, 1944. A total of 183 discarding sabot shells were lobbed until February 22, causing ten deaths and thirty-five injuries. This unimpressive result is unsurprising given that the gun crews of the 705th Artillery Battalion were basically blind firing the weapon, and the shells packed a relatively low explosive yield.

Another battery of V-3s was deployed to support the Operation Nordwind offensive aimed at retaking the city of Strasbourg, but was forced to withdraw from the firing site at Buhl by advancing U.S. troops before it ever had a chance to fire. The V-3s were soon abandoned by the 705th in favor of conventional artillery, and some of the discarded tubes were captured by U.S. troops and sent back to Aberdeen Proving Ground in Maryland for testing before being scrapped in 1948.

After World War II, the supergun concept was rapidly superseded by ballistic missiles—a technology pioneered by the German V-2 rocket. It is perhaps not a coincidence, however, that another megalomaniacal dictator, Saddam Hussein, invested considerable resources into building a supergun project, known as Project Babylon, with little to show for it.