Need Your Air Force Upgraded on the Cheap? Call Israel 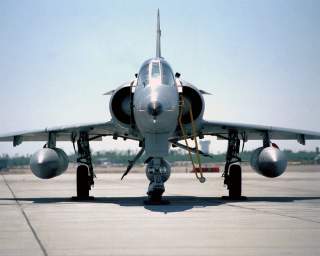 While glitzy new jets like the stealthy Lockheed Martin F-35 Joint Strike Fighter and the Russian PAK-FA capture the lion’s share of attention, most of the world’s air forces don’t need the latest and greatest toys. Often, something much more basic is more than sufficient for the purposes of most nations.

A lot of air arms don’t even need or even want the latest fourth-generation fighters on the market like the Eurofighter Typhoon, Dassault Rafale, Boeing F/A-18E/F Super Hornet, Lockheed F-16V “Viper,” Saab JAS-39 Gripen or even a Russian-made Sukhoi Su-30 or Su-35. Moreover, many countries simply can’t afford such extravagances. But even those nations have options—one doesn’t have to buy a top-of-the-line F-35 stealth fighter to obtain decent capabilities. Often, refurbished older aircraft can offer capabilities that are comparable to their new brethren at a fraction of the price.

Israel has often capitalized on that part of the international fighter market. Tel Aviv’s defense industry has sold or upgraded a host of aircraft for air arms around the planet. Those aircraft have ranged from its own homegrown products to upgraded Soviet-built MiGs for former Warsaw Pact member like Romania.

In fact, Romania still operates a number of Israeli-upgraded MiG-21 Lancers that incorporate modern Elta EL/M 2032 pulse-doppler radars and a partial glass cockpit. Those jets can also carry the Rafael LITENING targeting pod and a host of laser-guided bombs and the Python-series dogfighting missiles. Effectively, Romania received good, modern capability for a fraction of the price of a new fourth-generation fighter.

India also operates an extensively upgraded version of the antiquated MiG-21 called the Bison, which has proven to be surprisingly effective—if crash prone. With their upgraded Phazotron Kopyo radar—which is capable of simultaneously tracking eight targets—the Indian MiG-21s are able to attack targets beyond visual range with Russian-made Vympel R-77 radar-guided missiles.

The Indian MiG-21s also incorporate helmet mounted cueing systems and the ability to carry the R-73 Archer dogfighting missile. That combination makes the aged jet a formidable adversary close in even against a much more modern aircraft. In fact, the Indians MiG-21s fared well even against Boeing F-15C Eagle during a Cope India exercise in 2004—granted the U.S. Air Force was operating with restrictive rules of engagement.

However, while the Romanian and Indian MiGs were upgraded with new avionics, not much was done to upgrade their airframe structure. But conceivably, the even the ancient MiG-21 would still be viable with a refurbished airframe and cutting edge avionics. While no nations has opted to do that, Israel made a deal to supply fourteen refurbished and extensively modernized Israel Aerospace Industries F-21 Kfir fighters to Argentina—which is also a forty-year-old platform.  The airframe is being completely refurbished to an almost “new” state and the aircraft’s General Electric J79 turbojets will be supplied in a “zero-hour” condition after a complete overhaul, according to my colleague Arie Egozi at Flight International. An engine replacement/overhaul would be required after 1,600 flight hours.

The Mach 2.0 capable Kfir first flew in 1973, but the aircraft is an unlicensed derivative of the French Dassault Mirage V—which first flew in 1967. The Mirage V itself is a ground attack version of the Mirage III, which first flew in 1956. Thus, the Kfir design ultimately originates in the 1950s, but nonetheless, the latest Israeli modifications to the jet make the ancient fighter viable even in the 21st Century—and against much newer fourth-generation fighters. Even if the Kfir is old, it was always a fairly capable airframe. The U.S. Navy and U.S. Marine Corps leased Israeli Kfirs under the F-21 designation for use as aggressors during the 1980s against American fourth-generation fighters like F-14, F-15, F-16 and F/A-18.

Argentina’s Block 60 Kfir will be fitted with an Elta Systems EL/M-2052 active electronically scanned array (AESA) radar, which can simultaneously track sixty-four targets. The new radar can also simultaneously operate in air-to-air and air-to-ground modes—and it can support the latest air intercept weapons like the Israeli Darby active radar-guided missile (or AMRAAM if the U.S. were willing to sell it to Argentina). The jet is also being fitted with state-of-the-art electronic warfare systems for protection against air and surface threats. The Kfir will also be able to carry a host of Israeli-made air-to-ground weapons—and it offers a comprehensive suite of data-links.

It’s not clear if the Argentinian Kfirs are being upgraded with a helmet-mounted cuing system, but there is no technical reason that would prevent the integration of such a system along with the Python-5 high off-boresight missile. The integration of those systems would make the Kfir an extremely formidable opponent in a close-in dogfight. But the Israeli jet does use open architecture avionics—which makes it easy to upgrade. So even if it’s not immediately going to be equipped with those weapons, they could be added later.

Israel has other potential customers who might be interested in the Block 60 Kfir. Colombia is upgrading its Kfirs to a similar a standard as the Argentine jets while Ecuador—which operates an earlier version—may also want to upgrade its planes. But Israel’s sales focus has been on the Asia-Pacific region where there are a number of countries that need capable jets but which don’t have the money for an expensive top-of-the-line fighter like the F-16.

Only time will tell how much success Israel will have in resurrecting the four-decade old Kfir for the 21th Century. But if other jets are out of many nations’ price range, Israel may have a winner on its hands.