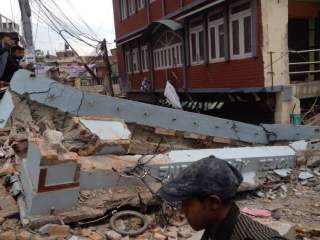 In recent years, strategic rivalry between India and China has been evident across the Indo-Pacific, with Beijing progressively growing its diplomatic, economic and military influence on India's land and maritime periphery, and India belatedly pushing back to preserve its once privileged position in nations like Sri Lanka and Myanmar.

Much like Cold War era competition between the US and the Soviet Union, this dynamic has given attractive options to local governments adept enough to play the risky game of playing off one nation against the other. The most prominent example has been Sri Lanka's ability to secure Chinese assistance in facilitating one of the most brutal counterinsurgency campaigns of recent times, before pivoting back towards India earlier this year.

Nepal's massive earthquake is first and foremost a human tragedy, killing upwards of 4000 people and placing a weak and under-resourced government under overwhelming stress. But the response has also been marked by elements of the same regional competition.

India, China, and Pakistan have all rushed to offer assistance and evacuate their nationals. As part of its “Operation Maitri,” India is using 12 military transport aircraft and 18 helicopters to drop aid into Kathmandu, evacuate Indian nationals (over 2000 by air so far), and most importantly, ferry at least ten 45-strong teams of the National Disaster Response Force to assist with search and rescue, many of whom reached the worst-affected areas near the epicenter on Monday. India has also set up three field hospitals with 18 medical teams.

Indian efforts are headquartered in Kathmandu under a Major General of the Gorkha Rifles, with a high degree of coordination between the Nepalese Army and Indian units, aided by the close, longstanding ties between the two forces (28,000 Gorkhas serve in the Indian Army, with another 125,000 retired in Nepal). Indian power grid officials have traveled to Nepal to help restore power, with an Indian Oil Corporation team following.

Nepal is a special case because of its deep and organic ties with New Delhi, the sheer heft of Indian diplomats, spies and military officers in Nepalese politics, and because of its proximity to India itself. Indian Prime Minister Modi has already visited Nepal twice since coming to power last year (for an excellent survey of India's policy dilemmas there, see this February piece by the authoritative journalist Prashant Jha). A significant part of this attention has been motivated by concern over China's growing footprint, including arms sales after India's 2005 cut-off, infrastructure projects and a close interest in 20,000 Tibetan refugees. Soutik Biswas observes that China overtook India as Nepal's largest foreign investor last year.

While China's relief efforts have been rapid, they have also been modest. The argument that “China's involvement...could further change the balance of power in the region, challenging India and potentially putting Nepal's Tibetan exile community at risk” is greatly exaggerated.

Nevertheless, Indian policymakers would have been aware that a delayed or mishandled relief effort could have not just humanitarian but also long-term diplomatic consequences (Keith Johnson notes in Foreign Policy that Beijing's response to the 2013 Philippines typhoon “helped further sour tensions with Manila”). One study even talks about “disaster relief diplomacy.’

India's response also highlights its growing humanitarian assistance and disaster relief (HADR) capability. This was on display most recently in Yemen, where India extracted not just 4741 Indians but also nearly 2000 foreign nationals from 48 other countries, something described by one retired Indian Air Vice Marshal as “a coming of age of our HADR system.” Many of the same capabilities were employed domestically after devastating floods in Uttarakhand and Kashmir, two northern states, in 2013 and 2014. And last year, other military assets, notably the Boeing P-8I maritime surveillance aircraft, were used as part of the multinational search and rescue effort for missing flight MH370.

HADR can be a means to build ties with other armed forces. It employs the same platforms and capabilities that would be called upon for projecting hard power over long distances; the same planes that ferry relief workers and aid can carry troops and tanks, and the same aircraft hunting for a missing aircraft can look for enemy submarines. But HADR allows militaries to built interoperability with foreign counterparts in less provocative settings than joint exercises, while developing near-identical capabilities. As a CNA study proposed last year, this is exactly why it's an excellent way to develop US-India military-to-military interactions, given India's unwillingness to sign formal agreements with the US on things like logistics support and communications interoperability.

In the short term, if regional competition produces quicker and greater support for Nepal's beleaguered government, so much the better.