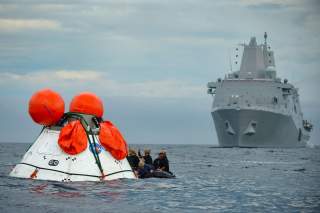 The Air Force and Pentagon are pursuing a strategy aimed at countering the fast-emerging weaponization of space and preparing to defend against space-war anti-satellite attacks, service officials said.

The service mapped out a multi-dimensional space weapons defense plan, resulting from several years of space-focused analysis and research. In 2014, the service conducted a Space Strategic Portfolio Review in which the entire space architecture was assessed. By 2015, the Air Force had completed a “space situational awareness” review highlighting the range of key space security issues as a foundation for the changing strategy.

The idea, naturally, is to prepare the U.S. Space enterprise for a more threatening, high-risk “contested” environment anti-satellite technologies proliferate around the globe.

Air Force is investing $5.5 billion over the next five years as part of this effort.

“Potential adversaries have taken notice of how we use space and have taken steps to replicate those capabilities for their own use and to devise capabilities to take them away from us if they ever got into a conflict with us,” Winston Beauchamp, Deputy Under Secretary of the Air Force for Space, told Scout Warrior in a special exclusive interview.

The Chinese fired a land-based kinetic energy SC-19 missile at a satellite in space several years ago, an action which inspired worldwide attention and condemnation.

“As long ago as 2007, they launched an ASAT (anti-satellite) test of a low-altitude interceptor. They struck and destroyed a defunct Chinese weather satellite and created tens of thousands of pieces of debris,” Beauchamp explained. “Much of that debris is still in orbit today and it continues to imperil the U.S. and other countries orbiting space.”

In response, the U.S. Joint Space Operations center has issued a warning to other countries which operate satellites to steer clear potentially damaging space debris.

Identifying the Chinese test-firing as “not a type of activity that we would deem to be responsible behavior,” Beauchamp explained that the Chinese have continued to conduct live-fire tests of ASAT weapons while avoiding repeated attacks on actual satellites.

The U.S. operates Advanced Extremely High Frequency, of AEHF, communication satellites which have replaced the older Milstar systems; they operate at 44 GHz uplink and 20 GHz downlink.

Although many of the details pertaining the U.S. space defenses and countermeasures are secret, there are some discussable elements of the Air Force effort to foster more “resilient” space assets.

“The satellite architecture is not as vulnerable as many have maintained,” an Air Force official familiar with the plan told Defense Systems.

This included fielding “U.S. equipment that can use both GPS and Europe’s Galileo navigation system,” Air Force officials said.  Naturally, this technique would allow U.S. forces to use allied assets if U.S. satellites were disrupted or destroyed by enemy attack.

A Distribution strategy designed to spread satellites apart which perform certain key functions to preserve a needed technology should some assets be destroyed. Deception tactics are used so that potential adversaries are not aware of which satellites perform certain functions.

“There is no one node that is invulnerable to attack,” a senior Air Force official said.

Overall, the Air Force and Defense Department have stepped up space development and collaboration designed to properly respond to what experts cite as a commercial “renaissance” in space research, development and technological advances.

For instance, DARPA has formally handed over its high-tech, wide-angle view Space Surveillance Telescope which, among other things, can detect potentially dangerous asteroids or attacks at further distances than previous systems could, a Pentagon statement said.

With this is mind, Pentagon and the various services are making progress developing position navigation and timing technologies which can operate in what is called a “GPS denied” environment.

Kris Osborn can be reached at [email protected].

This story first appeared on WARRIOR.