New Caledonia: The Crisis America Isn't Going to Do Anything About 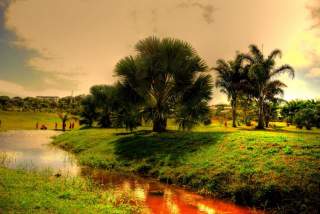 Given the long list of items on the Obama administration’s foreign-policy agenda—American neglect of the South Pacific is understandable. There are no vital U.S. interests at stake in the region, and that is unlikely to change anytime soon. Unless, of course, the big strategic picture makes the Melanesian arc of islands as strategically vital as it proved to be during the Battle of Guadalcanal. But I’m not expecting the U.S. cavalry to come to the rescue in the near future if my homeland of New Caledonia burns. And that’s okay.

In a thought-provoking work of political forecasting dressed up as fiction, a renowned New Caledonian expert portrayed a coming civil war on this island of divided political aspirations. (Over half of the population wishes to remain French, but the indigenous Kanak minority wants independence). In this book, a Chinese-trained Kanak general, versed in the Confucian way of war and armed to the teeth by the PLA, manages to defeat the French army and the local population in a classic blitzkrieg. The U.S. Navy ends up sending a couple of aircraft carriers to defeat this Chinese-backed coup, but they somehow get defeated by crudely-armed insurgents on an aluminum boat wielding IEDs, and by New Caledonia’s natural defenses—its almost impenetrable barrier reef. Defeated and humiliated by a band of Chinese-backed insurgents, Uncle Sam limps home and out of the South Pacific.

I can practically hear the U.S. Joint Chiefs of Staff laughing out loud at this scenario; and it is, of course, gloriously unrealistic. But that’s not the point. The point the author was making is much more realistic: my homeland of New Caledonia risks descending into the second nasty civil war in thirty years. But in the real world, neither China nor the United States is likely to get involved before the place has burned to the ground.

Of course, the United States cannot be expected to shoulder the burden of conflict management every time someone takes up arms or threatens their neighbor halfway around the world. For all its hard and soft power, it is only normal that the United States should focus on and prioritize crises which challenge the international order, such as Ukraine, wars in the Middle East and China’s actions in the East and South China Seas.

If I were American, I would recommend that the United States prioritize its interests defined in terms of power. But I’m not American. I am from that tiny, forgotten island that you had to look up on Google Maps.

This South Pacific nation is currently undergoing a very tense political transition that will last until 2018, as its citizens are called to vote on whether to become independent or remain French. A civil war engulfed the country on this very question from 1984 to 1988, and there are danger signs that locals are arming up for future conflict.

Gun sales have gone through the roof since 2011, when the French government liberalized arms sales to this fragile country. Now, according to our research, New Caledonia—if it were independent—would be second only to the United States in the number of guns per capita. Ostensibly, this is for hunting. But, in actual fact, when you speak to local gun buyers, many of whom live in the capital—where there are only stray dogs and homo sapiens to hunt—they are pretty honest in admitting that they’re buying arms “just in case” the country collapses once again.

Unlike the United States, New Caledonia’s civil war is within living memory, and its wounds have hardly healed.

During the last civil war, some partisans of a French New Caledonia sent an informal delegation to Washington, D.C. to ask Ronald Reagan for diplomatic support. The president received them, and, so far as I was able to garner from interviews, gave a show of support with B-52 overflights and other tacit strategic signals. The CIA, according to Bob Gates, also kept a watchful eye.

But this was the Cold War, and U.S. interest in New Caledonia solely came from this broader geostrategic context. The last time the United States took notice of this unsinkable aircraft carrier was during the Second World War, when 1 million GIs used it as a base and field hospital to fight off the Japanese at Guadalcanal and to defend Australia’s eastern flank.

Although many Americans probably don’t know it, the U.S. presence had a huge influence on the course of local history. The sight of African-Americans in the U.S. army jump-started the local civil-rights movement for the Kanak people. One small political movement in the 1980s was even dedicated to petitioning the United States to add New Caledonia as the 51st state of the Union.

Nevertheless, I am under no illusions that, if conflict broke out in New Caledonia today, it would not be a U.S. priority to do anything about it, let alone take any notice. This is a sobering view, but I think it’s accurate.

This is not at all a critique of U.S. foreign policy. It is, I think, a realistic appreciation of the limits of great powers’ involvement in local crises in far-flung places.

To an extent, New Caledonia’s fate will be much more strongly influenced by Australia, New Zealand and France, and by neighboring Melanesian states, such as Papua New Guinea.

But most importantly, and this is a message which I stress to my interlocutors in New Caledonia, whether this conflict ends peacefully or on CNN depends almost solely on local leaders and populations—not on external powers like the United States, or international organizations like the UN.

I strongly appreciate any external shows of support for a peaceful transition that international actors can provide. In fact, I would positively praise a U.S. show of leadership and benevolent interest at the G20 summit in Brisbane next month. Even a one-line reference to New Caledonia in a press conference by a single world leader would have immensely positive repercussions in such a small place used to international neglect, and would strengthen local partisans of peace and undermine potential peace spoilers.

But I also know that Obama has bigger fish to fry, and I don’t blame the United States for not caring about what happens on a cigar-shaped island halfway around the world. So, while I’ll keep dreaming about a G20 miracle next month, I won’t stake any money on it. Realists can dream too; but they always wake up.

Daryl Morini is the Director of the Centre for a Common Destiny, a conflict prevention think tank. He is currently finishing his PhD in preventive diplomacy.