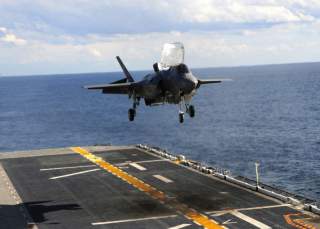 Defense watchers have been surprised by recent suggestions emerging from the Abbott Government that Australia could consider acquiring the Lockheed-Martin F-35B Joint Strike Fighter to complement the 72 F-35A JSFs already ordered. What might initially have been attributed to Prime Minister Tony Abbott being a bit vague in his message about the type of aircraft being considered, has now been clarified by the Defense Minister David Johnston, reinforcing that the F-35B is under consideration, and in fact that the writing team for Australia’s 2015 Defense White Paper has been ‘instructed’ to examine the possibility of acquiring such aircraft.

The assumption in considering the short-takeoff and vertical-landing (STOVL) version of the JSF is that they would operate from the Royal Australian Navy’s two Canberra class LHD vessels, thus providing Navy with what many would see as a ‘mini-aircraft carrier’ capability for the first time since the disposal of HMAS Melbourne to China in the early 1980s.

The LHDs might look like small aircraft carriers, but they’re certainly not designed to be such vessels. In fact, there are severe challenges in operating the F-35B on the Canberra class LHDs that would preclude them from becoming aircraft carriers—even small ones. Challenges of operating F-35Bs from the LHDs include a lack of fuel and weapons storage; unsuitable deck surfaces to sustain high-tempo air operations; an inability to maintain the aircraft aboard; and the small size of any air wing limiting its ability to make a decisive impact on operations. In addition, the deployment of the F-35B JSF onto those vessels would have to come at the expense of other capabilities.

It’s possible to ‘lilypad’ the F-35B on the LHDs as part of a cross-decking operation with allies—in effect, land and take off with a quick refuel and re-arm.  But that’s not the same as sustained carrier operations of the sort the US Marine Corps currently undertake with the AV-8B Harrier II off their much larger Wasp class LHDs and America class LHAs. Add to those challenges the fact that the design of the F-35B, which incorporates a large and heavy vertical lift fan, makes it the slowest and least maneuverable of the three JSF variants, with the shortest range and smallest payload, and the problems with that choice begin to mount substantially.

So why should the Abbott Government send such strong signals about investing in the F-35B STOVL JSF, given the above challenges? Under the 2013 Defense White Paper, Principal Task One (the defense of Australia) and Principal Task Two  (security and stability in the South Pacific and Timor Leste) of Australian defense strategy are seen to be force structure determinants, so choices on ADF Force Structure must make sense in achieving those goals.

The use of the F-35B to support ADF ground forces ashore undertaking stabilization operations in fragile states within the South Pacific under Principal Task Two is one option but it’s likely that helicopters operating from the LHDs would be more effective, and of greater utility. And none of the Pacific Island states have air forces that could contest the ADF’s ability to gain and sustain control of the air to enable joint operations. The F-35B would probably be overkill for a Pacific Island operation.

It’s the defense of Australia principal task, which includes ensuring control of Australia’s air and maritime approaches that seems more relevant to any decision to purchase the F-35B. The 2013 Defense White Paper reinforced the importance of controlling Australia’s sea and air approaches. That requires a “credible force with effective capabilities for sea and air control and denial, strike and power projection,” according to the white paper, and operational demands might require the ADF to operate well beyond the combat radius of the land-based F-35A JSF. In such a scenario, a Joint Task Force would be completely dependent on the naval surface combatant’s area air defense capabilities to counter air and missile threats.

In considering acquiring the F-35B, the Joint Task Force would have an added layer of air defense, and the aircraft would provide options for the Joint Task Force Commander in terms of anti-ship and land-strike, as well as reconnaissance. In addition, such a capability could also support operations under Principal Tasks Three and Four as part of a coalition. But it’s also important to frame any debate over whether the F-35B could be a viable option for the ADF in the future by realistically considering the operational environment in which the F-35B will undertake operations. Where are we going to use those aircraft, against whom, and under what circumstances?

Malcolm Davis is assistant professor in International Relations and post-doctoral research fellow in China-Western Relations at Bond University. The above article was first posted in ASPI’s The Strategist here.